The 500-step platform is a structure that first appeared in "Getting Teardrop to Talk" and reappeared in "Get to the Top in 500 Steps" as the challenge for the episode. Although this specific platform has the most prominent role, a similar-looking platform appeared in "Lofty".

The 500-step platform is a vertically dominant platform that consists of 500 steps to reach the top. It is unknown how tall the platform exactly is; however, it presumably takes a reasonably long time to scale up. This is based on the amount of time it took the contestants in "Get to the Top in 500 Steps" to reach the top.

A similar-looking staircase appeared in "Lofty" and appeared to be tan in color and taller than 500 steps.

The tan platform appeared in "Lofty" after Leafy contemplates on where they lead. The final 13 then climb up the stairs for 15 days. Snowball is the first to reach the top, with Tennis Ball behind him, who falls down at the last 2 steps.

The grey platform played a somewhat important role in "Getting Teardrop to Talk", where X stood on it while waiting for his baskets. The only team to interact with it directly is

In "Get to the Top in 500 Steps", the platform was again used in the challenge where a representative from each team had to climb the stairs in order to reach the top. Up there they would find a button, to win the challenge for their team they needed to press that button. When the challenge starts, Flower gets knocked over by the other contestants, with Pie telling her to "move it or lose it". 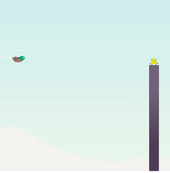 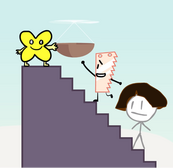