For the integer character, see Eight.

8-Ball is a male contestant on Battle for BFDI and was one of the 30 recommended characters who had a chance to join the game during "The Reveal". However, in "Reveal Novum", he failed to become a contestant, coincidentally getting only 8 votes, tied with Dictionary.

8-Ball also had a chance to join Battle for Dream Island Again, but he failed yet again, with only 154 votes and was tossed into the TLC. He had a chance to join IDFB, but he tied with Marker and Pie with 110 votes.[1] He competed in Battle for BFDI on the team 'A Better Name Than That' until he was coincidentally eliminated in the eighth episode of BFB, "Questions Answered", with 4,814 votes.

He also appears in Battle for Dream Island: The Power of Two.

8-Ball appears to be a #8 billiard ball, a ball used to play the table game Billiards (also referred to as Pool).

8-Ball always wants everyone to know that he does not have a favorite number, despite his name. He speaks with a bland, monotone voice, except when A Better Name Than That almost lost in "Today's Very Special Episode" because of him, he got emotional and almost started to cry when apologizing to Golf Ball. In "Getting Teardrop to Talk", 8-Ball successfully managed the team after Golf Ball's death without being too controlling or bossy. 8-Ball's excellent leadership gives him the title of team captain in "Lick Your Way to Freedom".

However, he became a contrarian to Golf Ball in later episodes. It was later revealed that he was joking and trying to add humor to his team the entire time. The other team members, however, still obeyed him rather than Golf Ball, causing the team to almost lose twice. 8-Ball's attempts at humor show that he tries to lift the spirit of the team and boost morale with good intentions, though he often comes across as somewhat dim-witted at not seeing the negative effects of his sarcasm.

8-Ball is a pool ball-the black 8 to be exact. Unlike the other balls, he moves around by rolling. His limbs, they are gone.

8-Ball will not let people forget that he doesn't have a favorite number. Despite his uninterested tone of voice, he inspired his team to overthrow Golf Ball as its leader. Everyone seems to listen to him whenever he opposes Golf Ball's directions. In fact, Basketball is 8-Ball's closest follower, asking him for guidance during BFB's most tumultuous time.

In "Vomitaco", 8-Ball appears as a recommended character.

In "The Reveal", 8-Ball has been "handpicked out of hundreds" and has the chance to debut in BFDI. He states that he has no favorite number in his audition.

In "Reveal Novum", 8-Ball coincidentally receives 8 votes and is sent to the LOL.

In "Return of the Hang Glider", 8-Ball can be seen amongst the numerous recommended characters, watching the final Cake at Stake.

In "No More Snow!", 8-Ball, Grassy, and Bell can be seen in the woods as Book and Ruby run away from Evil Leafy.

In "Welcome Back", 8-Ball has the chance to join in IDFB. However, even if IDFB 2 was released, he didn't receive enough votes to join the show.

In "Getting Teardrop to Talk", he is first seen talking to Gaty, asking her what her favorite number is. When Gaty replies with 3, 8-Ball says he doesn't have a favorite number. He joins A Better Name Than That and helps recruit Golf Ball and Tennis Ball for the team. During the challenge, 8-Ball is used to bring the basket down to the ground according to Golf Ball's plan. He appoints himself as team leader after Blocky kills Golf Ball, and successfully helps the team get the basket to X.

ln "Lick Your Way to Freedom", he bites a jawbreaker, opening it and revealing Golf Ball to be inside, making their team safe. A Better Name Than That appoints him as the new and current team leader, due to Golf Ball not treating Grassy with respect.

In "Why Would You Do This on a Swingset", 8-Ball takes advantage of his place as the team leader and orders his team to do the opposite of whatever Golf Ball says, beginning this spree of sarcasm, much to Golf Ball's dismay.

In "Today's Very Special Episode", 8-Ball once again reverses Golf Ball's instructions, telling the team to waste time on the challenge, which prompts TV to start a countdown to just before the end of the contest. After his team barely passes, 8-Ball suddenly drops his bland voice and apologizes to the team for contradicting Golf Ball's original command to go to work and nearly causing the team to lose. He claims that he had only been saying those things sarcastically, "to add some humor" and lift the team's spirits. Golf Ball seems to forgive him, but the rest of the team continues to ignore her.

In "Four Goes Too Far", Basketball complains about Four being so destructive. She asks 8-Ball what to do about this, but he says Golf Ball has the answer. When Golf Ball tells A Better Name Than That to get on her rocket, 8-Ball begins to tell the team to do the opposite, which causes Golf Ball to get somewhat upset.

In "The Liar Ball You Don't Want", while contestants from

throw instructions at Tennis Ball, who is trying to control Remote to defend their goals in the challenge, 8-Ball informs them that they are doing their best.

In "Questions Answered", his team is up for elimination. 8-Ball and his team are still seen on the Moon until Donut unites both the Earth and the Moon. In Cake at Stake, he gets the most votes out of his entire team, placing him 58th. 8-Ball is then crushed to death by the Moon, and his fumes are inhaled by Saw, which causes her to shout "Eight!" at random times during the quiz show.

In "Enter the Exit", Four is recovered and Clock tells him which contestants have died. Four recovers them, 8-Ball included, but Clock then remembers he was eliminated so he gets sucked up by Four. After all the eliminated contestants who weren't yet get sucked up, 8-Ball notices a door. This leads to EXIT. When the first four eliminated contestants wonder why there is a talking jawbreaker, he informs them that it's Loser, leaving the four eliminated contestants in shock. However, he states that because Loser lied, everyone hates him. Bracelety says she still doesn't hate him until 8-Ball says that Ice Cube hates him, changing her mind. Later, Four announces to the class that one of the eliminated contestants will rejoin the show. Pencil says that she's been dying to get out of the class, followed by 8-Ball and Stapy agreeing, leading to Liy reminding them they've only just gotten there. During his audition to rejoin, 8-Ball says that he shouldn't be in math class because he already knows what the most important number is. He's about to say eight but is then interrupted by Four singing, causing him to say four. He then whispers to the viewers, "times two." However, Four hears this and attacks him.

In "Get to the Top in 500 Steps", 8-Ball only receives 998 votes to rejoin, keeping him in EXIT. When he asks Liy if she's sad she didn't rejoin, Liy points to the door in the back of the classroom and tells him she's found her next adventure.

In "The Escape from Four", 8-Ball tells Pencil that Loser couldn't hear her from inside the Liar Ball, which encourages her to eavesdrop on what he's saying. Later, when Loser breaks free from his Liar Ball, he is glad to see him and said that he loves Loser eight times more than he loves Winner. He is seen cheering for Loser along with Firey Jr. and David as he was building their tower. Unlike the others, 8-Ball isn't able to participate in escaping through Spongy due to his lack of limbs.

In "Chapter Complete", 8-Ball is first shown cheering for Four. A voice can then be heard asking when Four will come back, and 8-Ball asks Four what it meant by "coming back". Later, 8-Ball tells Four that everyone except them dislikes him, but that he shouldn't worry as he may not have a favorite number but does have a favorite host. When Four says that the contestants don't deserve to have him and can keep the Announcer, 8-Ball says that they wouldn't even care, making Four angry enough to zap 8-Ball, killing him. 8-Ball's body, along with other fake contestants, is then snapped out of existence by Four.

In "You Know Those Buttons Don't Do Anything, Right?", 8-Ball appears briefly in the stinger, watching Liy and Stapy with the other EXITors. 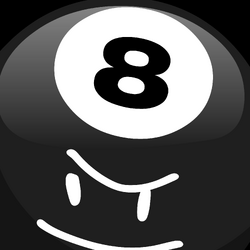