Battle for Dream Island Wiki
Register
Don't have an account?
Sign In
Advertisement
in: A Better Name Than That, Teams, Season 4 teams, Battle for BFDI
English

A Better Name Than That (or ABNTT for short, and frequently misspoken as Another Name Than That by Four), stylized as A BETTER NAME THAN THAT, is one of the eleven teams in Battle for BFDI. The name was created when Golf Ball said that if her team wanted to win, the team name had to be better than Death P.A.C.T.. Because she said the name must have "a better name than that," the team earned that name, a reference to Another Name.

When everyone was making teams, Golf Ball witnessed Death P.A.C.T. devise their name and said to her own team, "Hmm. If we want to win, then our team must have a better name than that!" And the name stuck! "A Better Name Than That," or ABNTT, was born.

The team often struggles because its members care too much about who is leading them. Golf Ball, for one, thinks she should be the leader, but 8-Ball undermines her all the time, making it unclear who everyone should listen to. Although 8-Ball turns out to be a really bad leader, the others listen to him because Golf Ball is too bossy.

In "Getting Teardrop to Talk", the team started with Basketball asking 8-Ball to form a team together since they are both balls. 8-Ball suggests adding Golf Ball, Tennis Ball, and Snowball because they are balls too. Snowball rudely declines the offer. Grassy then tells Basketball that no one has picked him yet, so Basketball chooses him on the team. Golf Ball states that the team needs at least 2 mechanical minds. Robot Flower and TV then get picked. Blocky joins by overhearing Grassy stating that "with a team like this, we're sure to get up to loads of funny doings". This then fills the team.

When it was time to choose names for your teams, Basketball looks at Death P.A.C.T. saying that they're naming their team. Golf Ball states if she wants her team to win, then her team must have a better name than that. The name is finalized.

In the challenge, Golf Ball tells Robot Flower and Blocky to climb up the tree to catch a basket because they have arms. Golf Ball says that TV will relay coordinates of baskets' locations, and 8-Ball and Basketball will weigh the baskets down once someone has gotten a hold of them. Grassy does nothing. Blocky asks what Golf Ball will do, with her responding that she is managing the team. Tennis Ball follows. This gets Blocky mad at Tennis Ball and kills him.

In "Lick Your Way to Freedom", Grassy tells Blocky that he needs more respect from Golf Ball. While Blocky tries to find Golf Ball, 8-Ball reminds Blocky that he killed her last episode. Blocky then tries to find recovery centers, but Robot Flower says that the recovery centers were destroyed, so Blocky tries to tell Four to recovery their dead team members, before being interrupted by Four to do Cake at Stake. After Cake at Stake, Grassy tells Four to recover Tennis Ball so Four does so.

In the challenge, 8-Ball bites open a jawbreaker, freeing Golf Ball and making A Better Name Than That safe. The team then tells Golf Ball that 8-Ball is the new team leader. Golf Ball gets furious and makes Tennis Ball do something, but Tennis Ball replies that he couldn't stop them.

In "Why Would You Do This on a Swingset", Golf Ball tells her team to spin forward, but 8-Ball commands the team to do the opposite of it, and makes the team follow his orders. Golf Ball proceeds to make commands, but the team still follows 8-Ball orders. The scene ends when Golf Ball tells the team to "spin in circles, really slowly", and the team is safe off-camera.

In "Today's Very Special Episode", Golf Ball tells the team not to waste time. However, 8-Ball tells the team to waste time, and the team gladly follows 8-Ball's orders. When there are only 30 seconds left, Golf Ball exclaims that time is running out, but Tennis Ball says they were just following orders. When TV's timer runs out, Golf Ball tries to lead the team with no success, before deciding to draw Four herself, which makes the rest of the team irritated. When time is up, Four takes Golf Ball's drawing and declares the team safe. After the challenge, Golf Ball says that their team almost lost. 8-Ball tries to say the opposite but admits that it was his fault that the team almost lost. He says that he did so because he wanted to add some humor. However, only Robot Flower hears what 8-Ball says, but she gets interrupted by TV, saying that she's a machine.

In "Fortunate Ben", Golf Ball asks how the steering was going, and Tennis Ball tells Golf Ball that this is just a paper plane.

In "Four Goes Too Far", Basketball says irritably that Four's destruction was ruthless, and asks 8-Ball what to do. 8-Ball says that the answer to that question lies with Golf Ball, who tells the team to multiply Four by zero. During Cake at Stake, when Four is about to blast Nickel, the team initiates their plan, which is successful. Golf Ball tells TV to calculate the final results after the event. After Cake at Stake, Tennis Ball hints that Donut should be the new host.

During the challenge, the team goes to the moon to avoid the twinkle. The plan fails as Golf Ball gets the twinkle when they arrived on the moon. Later, the team and

have a staring contest. The twinkle eventually goes back to Earth, which makes the team celebrate, before the rocket breaks.

In "The Liar Ball You Don't Want", the team is still on the moon with

and is shocked to discover that Taco is dead. During the challenge, Basketball inspects Robot Flower so that she could send data to Remote. The team follows Golf Ball's orders, but Tennis Ball disapproves of the idea as he sees it as unethical. Later, the ship becomes unstable. When Grassy nudges the rocket, the connection becomes unstable. This allows Remote to send a bomb to Robot Flower, who ultimately decides to close connection to save the two teams. However, this makes the team up for elimination.

In "Questions Answered", 8-Ball is eliminated with 4814 votes and gets crushed by the moon soon after. During the challenge, Golf Ball answers Question 5 correctly, making her team safe.

In "This Episode Is About Basketball", Blocky throws Tennis Ball and Basketball into the basket to lower it so they are the first team safe.

In "Enter the Exit", Blocky uses Needle, Match, and Pen to shape a 4. Robot Flower also tells her team that it was Remote who sent them a bomb.

Later, Golf Ball examines Grassy but she can't conclude. Robot Flower sees this as stalling to make the team loses. However, when "Basketball" complains about Grassy being basic, Blocky figures out that Basketball is the fake, as Grassy and Basketball are friends.

In "Return of the Rocket Ship", Golf Ball shows her MMR to Tennis Ball and explains how it works to Blocky. Tennis Ball uses the MMR to discover the emerald's location while accidentally sending his thoughts to X, which is "X is stupid". TV says to keep the location a secret, but Grassy yells the location out loud anyway. Basketball is woken up by Grassy's yelling and tries to learn the team's plan. However, Golf Ball distrusts her. TV guesses it's because she was the impostor last episode. Later, Robot Flower gets Golf Ball's rocket and Blocky rotates the satellite to dig a hole.

In "Don't Dig Straight Down", the team finds an emerald and wall-jumps to get to the surface. Basketball at first has the emerald but Golf Ball swipes it and gives the emerald to Four and makes the team safe. Soon after that, five pairs of arms come out from Four's mouth, making Tennis Ball disturbed and Basketball confused. Robot Flower, Blocky, and Golf Ball are outraged that the other teams could take their emerald, but Grassy isn't bothered by it. Golf Ball gets Four to barf the emerald out, only to have it be used by a couple of other teams to make them safe.

Later, Golf Ball points out how the grass around her is dying. Blocky says it's because she's stinky, but Golf Ball then figures out that iance is trying to break through the surface. Therefore, she steps on every patch of dying grass, even though the rest of the team wants her to stop until she notices there're intruders in her factory.

In "The Four is Lava", Blocky, Robot Flower, and Tennis Ball are the only members of their team who are alive. Blocky tells Flower to stop complaining, so Robot Flower tells him to be more sensitive. Tennis Ball asks how they could complete the contest, so Blocky bends the tree to get to Four, making Tennis Ball and Robot Flower confused until he launches. After a fight with Puffball, Blocky lands on the bench. Robot Flower, not knowing he's already safe, tries to catch him but ends up overheating in the lava.

In "The Escape from Four", A Better Name Than That was dissolved due to the show's split. 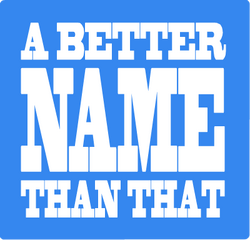