Battle for Dream Island Wiki
Register
Don't have an account?
Sign In
Advertisement
in: Devices, Items, Machine,
and 2 more

The Announcer Crusher is a device/construction that was originally made by Flower in order to crush the Announcer if she gets eliminated or fails to rejoin the game. The Announcer Crusher appears to be a huge construction that looks like a deformed number one. In order to activate it, the user needs to press a single button on the remote that is attached to it with a long black wire. When the button is pushed, the crushing cuboid will move down at high speed and supposedly crush everything underneath it. Although Flower built it and happened to own it alongside using it in cases when she felt the need to crush the Announcer, it can be used by anyone else for other purposes such as executing someone or turn things inside-out.

In BFB, due to her personality significantly improving (and the Announcer being gone until BFB 28), Flower lost any interest or desire to use the Announcer Crusher anymore, as she never once mentioned the crusher in BFB. However, it was still used for other purposes and on other people, such as by Donut on Loser in BFB 7.

In it's first appearance, the Announcer Crusher has a light smoke gray base similar to a number one. The moving part of the crusher has a lighter shade of gray and appears as a cuboid underneath the part of the base. The trigger for the device is a black remote with a red single button on top and has a long back wire connected to the crusher.

In "Insectophobe's Nightmare", the Announcer Crusher has been recently refurbished by Flower. Due to this, the base has multiple cracks covered by tape while the cuboid is upgraded with spikes.

In "Return of the Hang Glider", the Announcer Crusher reverts back to its first appearance, but it now has a platform underneath the cuboid for contestants to be executed by the crusher.

In "The Liar Ball You Don't Want", the Announcer Crusher appears again, taking on the same appearance it had in "Insectophobe's Nightmare", with cracks covered by tape and with the addition of spikes.

In "The Tweested Temple", the Announcer Crusher appears once more, taking on a different appearance. It now consists of 2 crushing parts, which is both the top crusher and the platform itself. Instead of being activated by a button, it has "PulverizeOS Voice Assistant" installed, which turns on the crusher when it recognizes the pulverize command. It also has a green light, which turns on when the crusher is activated.

The Announcer Crusher made its first appearance in "Barriers and Pitfalls" in the first Cake at Stake ceremony when Flower is about to get eliminated. When she and Golf Ball were the last ones left, she threatened Announcer with being crushed with the crusher if she is eliminated. When she found out that she has been eliminated, she pushed the button on the remote that she was holding in her hand. The Announcer Crusher was activated but failed to crush the Announcer because of Golf Ball blocking it. The Announcer Crusher's crushing cuboid couldn't hold any more pressure, so it cracked and exploded shortly after, sending Flower to the TLC. Somehow, no one else was injured, except Bubble, who was popped by one of the splinters from the device.

It reappears rebuilt and refurbished in "Insectophobe's Nightmare", where Flower threatened the Announcer to crush him with it if she didn't rejoin. When she didn't have enough votes to rejoin, Flower gets flung away before she can trigger the device.

The crushing cuboid briefly appears in "Rescission", where the Announcer uses it to crush the point scoreboard after removing the points.

It reappeared in "Return of the Hang Glider" being used by Eraser and the other contestants to crush Leafy with it as punishment for selling Dream Island. However, Firey manages to save her while riding a hang glider before it can kill her.

It's 2nd last appearance was in "The Liar Ball You Don't Want". Donut used it to turn a jawbreaker Loser was in inside-out, creating the Liar Ball. It is worth noting that this Announcer Crusher was the refurbished one, and not the one used in Return of the Hang Glider. This implies that it was destroyed after the events of Return of the Hang Glider, or that the two revisions of the device are actually separate entities.

"I found Flower's Announcer Crusher! I'm pretty sure it'll do the job!" ~Pencil, "Return of the Hang Glider" 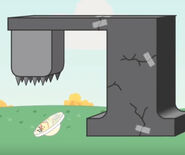 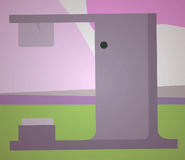 The Announcer Crusher in "The Tweested Temple"

The Announcer Crusher after activated via the pulverize command 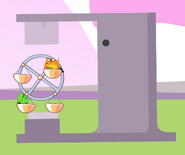 Leafy and Firey on the Announcer Crusher
Items
Community content is available under CC-BY-SA unless otherwise noted.
Advertisement