Battle for Dream Island Wiki
Register
Don't have an account?
Sign In
Advertisement
in: Speaker Box, Vehicles, Items,
and 2 more

To carry and transport Speaker Boxes.

The Announcer Transportation Device, frequently called a UFO, is a spacecraft primarily used to carry the Announcer, Speaker Boxes, and other objects through space at fast speeds.

The exterior of the craft resembles a typical flying saucer, with a glass dome on the top and green lights forming a ring around it.

The interior is much larger compared to the outside. The same green lights once again dot the inner wall. An aperture closing is in the center of the main room, and a switch/one-way lever that toggles flying is situated on the wall. Also placed on the wall is a sign that says, "Announcer Transportation Device".

The UFO hosts another room, separated from the main room by a narrow window. The side room is where all the Speaker Boxes are held.

The ATD first appeared in "Gardening Hero", where it was one of the methods a contestant could lose immunity. It first abducted Rocky, but blew up due to his vomit.

The UFO later appeared in "Return of the Hang Glider", where it abducted Tennis Ball, Match, Snowball, and Woody for an unknown reason. Match turns off its flying switch, causing it to plummet to the ground, where it crashes and kills Flower. It is also revealed that Woody had died in the UFO due to his fear of the color gray. The Speaker Boxes exit the craft to bring the Announcer with them. The UFO then somehow repairs itself and quickly shoots off into space.

In the water's reflection in the IDFB intro, multiple flying saucers can be seen evacuating Yoyle City. It is possible that these saucers are more Announcer Transportation Devices. 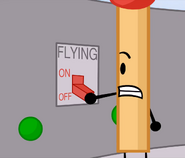 The other speaker boxes. 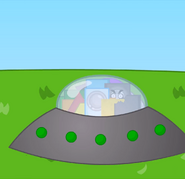