Battle for Dream Island Wiki
Register
Don't have an account?
Sign In
Advertisement
in: Articles proposed for merging, Items, Prizes,
and 6 more

"Return of the Rocket Ship"

BFDI DDSs are handheld game consoles that appeared in "A Leg Up in the Race" as a prize given to the final 12 contestants remaining in the competition. There are 12 screens to play on, hence the name "DDS", which stands for "dodeca-screen". It is also foldable, as shown wrapping in 12ths around Match.

In BFDI, it is a thin board with 12 tiny screens, a D-Pad, and a Circle Pad along with multiple other buttons that are outlined in gray and colored white.

In BFB, it is colored a deep purple instead of white, because of the color scheme of the background objects, but it remains the same otherwise. However, the D-Pad and Circle Pad swapped places.

Announcer with a bunch of BFDI DDSs

Numbers are shown on the BFDI DDS 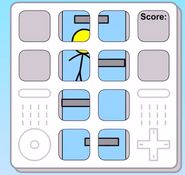 GTTTATINT being played on the BFDI DDS

Match with the BFDI DDS

The BFDI DDS folding itself on Match

The console in Cloudy's Collection

The recommended character from "Lick Your Way to Freedom"