Start a Wiki
watch 02:23
Who is Balloony?
Do you like this video?

Balloony is a male contestant in Battle for BFDI and was one of the 30 recommended characters that had a chance at joining the game during "The Reveal" and "Reveal Novum". However, he failed to get into the game, receiving only 6 votes and placing 21st.

Balloony also had a chance to join BFDIA, but placed 32nd with only 102 votes, and he was flung to the LOL.

Balloony, along with the other characters in the TLC, had a chance to debut in IDFB, but didn't get enough votes to join, with 71 votes.[1]

Balloony is currently a contestant on Battle for BFDI, and is a member of Beep.

Balloony appears to be a balloon with an unknown type of gas in it. Balloony's body is jade, his shading is emerald, and his shine is mint. His body is a thin line like Flower's, but he is made in a curvy shape to look like the string of a balloon. Unlike Flower's body, the string is a part of his asset.

Balloony is a generally kind character, but he won't take attitude from other characters, and can become irritable towards bossy teammates. Balloony has proven to be smart and good at problem-solving, similar to Tennis Ball. Balloony is also pretty brave. When deflated, he isn't capable of too much movement, let alone being able to even stand. Balloony can also be protective, as seen in "What Do You Think of Roleplay?", when he told Nickel not to stab Woody.

Balloony is a balloon filled, apparently, with air. He can move around by letting out air, but it leaves him deflated. Not a good look for a balloon. Balloony hates to be told what to do, and he tries to rely on himself to accomplish things because he doesn't trust others to do it right.

Like all balloons, it's important for Balloony to avoid sharp objects and being over inflated.

Did You Know?: Balloony tried filling himself with helium just once. It was very painful.

In "Don't Lose Your Marbles", Balloony makes his first appearance. He appears behind Match when she shows relief over getting out of the danger zone.

In "The Reveal", he is one of the 30 handpicked characters who could join the game. He squishes his head in his audition.

In "Reveal Novum", he only gets six votes to join and is flung to the LOL.

In "The Glistening", an armless version of him with no string votes Ice Cube to be eliminated.

In "Return of the Hang Glider", Balloony and his many versions watch the final Cake at Stake.

In "Yeah, Who? I Wanna Know", Balloony only gets 102 votes to join the show and is sent to the TLC.

In "Get in the Van", he can be seen standing in the TLC/LOL.

In "Welcome Back", Balloony is given the chance to join the show by getting voted out of the TLC.

In "Getting Teardrop to Talk", after Flower gets Black Hole to move towards the Earth, Balloony asks her what she did before getting sucked up by Black Hole. When Four appears, he revives him, much to his happiness. He's picked by Leafy to be on her team, despite not needing her help. He discusses what their team name should be and they end up getting named Beep. He manages to successfully get their team's basket back to X by deflating himself, making their team safe.

In "Lick Your Way to Freedom", he stays deflated throughout the episode. He tells David to start licking the jawbreaker, but David refuses. He uses Rocky's acid to melt a jawbreaker, saying that his vomit was salt-and-vinegar-flavored. His team was the last to open a jawbreaker so they are up for voting. He gets popped while being inflated by Leafy at the ending.

In "Why Would You Do This on a Swingset", he is finally revived by Four for Cake at Stake. When Four says the eliminated contestant will be going to sleep, Balloony explains to Cloudy that sleeping is one of Four's code words for elimination at Eternal Algebra Class Withfour. Four is suspicious of how Balloony knows that but lets it go when asked about how many votes they got. Balloony receives the least amount of votes to be eliminated. Balloony receives an Earth, which he pokes with his finger, seemingly crushing Four. He asks if Rocky (who he refers to as Little One) is safe, and when he is, Balloony tells him that everyone liked salt and vinegar. When Cloudy is about to vomit due to realizing a man looks like David, he gets excited and expects more salt and vinegar. He is happy about Leafy getting eliminated, as there will be no more rules for the team to follow as a result. During the challenge, he and Roboty come up with the plan to have Cloudy push the swing around fifty times so that the team can be safe.

In "Today's Very Special Episode", he gets angry at David for not liking how they made their cake for Four.

In "Fortunate Ben", during the plane contest, he makes a comment about David being good at piloting after he ends up injuring Cloudy. As a result, Nickel informs that David's piloting could actually be hurting Cloudy, not understanding that Balloony was being sarcastic. Cloudy informs Nickel that Balloony was being sarcastic. When the plane starts falling due to the weight, Balloony mentions not to hit the cliff, because doing so will cause them to be the first to hit the ground. He tries to come up with a way to change the airflow and Woody dabs. Balloony thinks this is a genius idea and the whole team starts dabbing. Balloony says it isn't enough and is relieved when David finally wakes up. However, they don't make it over the cliff, and hit the ground and lose the contest. This causes the team to be up for elimination.

In "Four Goes Too Far", Four calls their team "Beep Beep". Balloony says that isn't their team name, and Roboty beeps twice, which makes Balloony turn to him and say he isn't helping. This time, the amount of votes Balloony receives is in the middle, and he gets turned orange as a prize. When Four gets multiplied by zero (Donut), he asks how they will know whether David or Roboty will be eliminated. After finding out Roboty has the most votes, he starts to say how he'll miss Roboty before realizing he has disappeared and asking where he is with a shout.

In "The Liar Ball You Don't Want", Balloony carries Rocky out of the elimination area. After Cake at Stake, he asks what Donut did with Loser. When Donut simply tells him he "eliminated him", Balloony angrily repeats the question. In the challenge, Balloony is the first to get the Liar Ball but is then popped by Stapy.

In "Enter the Exit", Cloudy tells X about how he misses Balloony. After Four is brought back, he recovers Balloony along with the other dead contestants. When he sees Cloudy, he starts to take off his bandages. He's disgusted when he finds out that underneath them, the color of Cloudy hadn't changed.

In "Get to the Top in 500 Steps", Balloony leans in close to Four in order to listen to a weird noise coming from him. However, X warns him not to stand there. Balloony attempts to argue, but X forces Balloony to leave. It's then revealed that Leafy is rejoining, but Balloony, along with the other members of Beep, back away from her since they don't want her in their team anymore due to how she acted prior to being eliminated. For the challenge, Balloony is chosen to walk up the stairs for his team. When Dora shoots up the stairs quickly, she pushes him off, along with Tennis Ball, Bomby and Flower, but Balloony floats back down onto the stairs and presses the button for his team.

In "What Do You Think of Roleplay?", Balloony gets upset at Nickel when he points a fork at Woody, and tells him not to stab him. Nickel says he wasn't going to, but Balloony still wants the fork from him. They fight over it until they both fall over and the fork pops Balloony. This actually works in the team's favor, as it gets "Rocky" to talk, exposing Basketball to be the impostor.

In "Return of the Rocket Ship", Cloudy asks Four to recover Balloony. After Team Ice Cube! falls into the hole that Lightning created, Balloony tells his team that since they're just a team of followers, they should jump in as well, which they do. Later on, when Balloony's team is falling down the hole, he sarcastically states in between screams that his life is just great.

As Beep are about to land on top of Team Ice Cube! and Bubble, Ruby comes up with a plan to divert Beep's path. Ruby and the rest of iance blow on Beep as they are falling and Balloony and his team get blown in a hole off to the side. As they are now stuck in the hole, Cloudy gets angry at Balloony for forgetting the shovels that he asked him to collect. Balloony retorts by reminding Cloudy that he is an airhead. Woody starts to shake Rocky and say something unintelligible to everyone but Balloony, who immediately understands that he is trying to say "salt and vinegar" (referring to Rocky's vomit). Balloony then starts swinging Rocky around, hitting Cloudy in the face at one point, in order to make Rocky have to vomit. Rocky barfs, melting a hole in the floor beneath them, which they all jump into.

In "Don't Dig Straight Down", Balloony disagrees with Nickel about how smooth the challenge is going for them and adds that Rocky's vomit isn't eroding as fast as they are falling. He then follows Nickel's order which is to grab on Cloudy and cheers with the rest of the team. Balloony sees Naily falling and exclaims that this makes no sense. When

and Naily are trying to avoid the lava, Balloony reminds them of the acid and orders Cloudy to turn around. He tells Cloudy to turn around again when he remembers the lava. Cloudy says that they need Rocky to barf more acid, but Balloony tells Cloudy that Rocky's stomach is empty. When Nickel suggests a refill, Balloony assumes Nickel volunteered to be eaten and tells Rocky to do so. They then land on top of Golf Ball's Underground Factory.

Having no other options, Balloony starts trying to dig through the solid ground with his hands. Balloony is annoyed that others are not helping, and warns them that the lava is only a few feet away. Then, he uses Naily in order to break through, which causes an alarm to go off. Later on, he dies when the lava comes in contact with his head.

In "The Escape from Four", Balloony is one of the fourteen contestants to continue competing on BFB, rather than switching to TPOT. He, along with Four and his thirteen opponents, are transported by Two to an unknown area to compete. 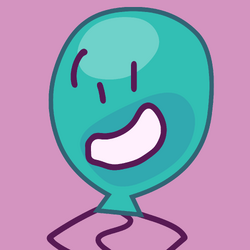