< Balloony
View source
watch 01:40
Boba Fett Returns - The Loop
Do you like this video?
Play Sound

This page is about the interactions and relationships between Balloony and the other characters.

Balloony is a kind character, but he won't take attitude from others. He can also become annoyed at bossy teammates as well as people who want to harm his friends. He will use sarcasm when somebody does something he doesn't like.

In "Getting Teardrop to Talk", Balloony is the only character who is killed when Black Hole gets closer to the earth.

In "B.F.B. = Back From Beginning", he and Blocky both occupy the BFB 12 portion of the challenge.

Despite having no prior interactions, Balloony and Bubble appear to be on good terms in "Take the Tower", to the point that Bubble would try to stop him from being eliminated.

Balloony always appears to be upset with David. In "Lick Your Way to Freedom", he angrily demands that David lick the jawbreakers.

In "Today's Very Special Episode", Balloony shows distaste towards David for being against their vomit cake.

In "Fortunate Ben", Balloony sarcastically compliments David's piloting when it knocks Cloudy out. Balloony is however, happy to see David wake up in order to help them win. 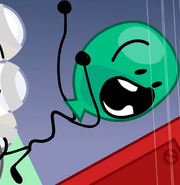 Balloony's only positive interaction with David

In "The Liar Ball You Don't Want", Balloony asks Donut what he did with Loser after he was eliminated. Donut gives him a no answer, stating he "eliminated him", Balloony asks again, wanting him to be specific.

In "Getting Teardrop to Talk", Balloony asks Flower what she has done when Black Hole starts to move closer to the earth.

In "Getting Teardrop to Talk", he is happy when Four recovers him.

In "Why Would You Do This on a Swingset", Balloony reveals that he knows about EXIT which causes Four to grow suspicious of him.

In "Get to the Top in 500 Steps", Balloony listens closely to the noises coming from Four while he's in the EXIT

In "X Marks the Spot", when Balloony high-fives Lollipop, Four gets upset that Balloony gave Lollipop a high-five instead of a high-four. As punishment, Four stretches out Balloony's right arm to make four finger-like shapes, which makes Balloony scream in pain.

In "Take the Tower", he tells Four to pat Lollipop to help her wake up. After he's eliminated, he tells Four to suck him up and is dumbfounded when he learns Four won't be doing that anymore due to the EXIT being full.

In "Chapter Complete", Balloony is surprised at the idea of saving Four as he's afraid he'll pull his fingers again. When everyone finds Four merged with the courthouse, Balloony tells him that it's not a very good disguise. When Four merges with a train and shouts "choo choo!", Balloony says that he feels conflicted. He finds Four's presence very scary and alarming, but finds it odd when he says something like "choo choo!", which he feels is a very nonthreatening phrase. Later, Balloony finds Four merged with the BRB and tries to get Four to talk with everyone when he becomes the Sun. When Four starts listening, Balloony says that while the BRB was rough, it was cool of Four to let them use tablets while they were inside.

In "B.F.B. = Back From Beginning", Balloony tells Gelatin to choose if he or Blocky is really him, sarcastically commenting about how difficult this is. To Balloony's shock, Gelatin points to Blocky. Balloony then says that he'd like to have a lunch with Gelatin, to ask how he could've possibly thought that was the right answer.

In "Chapter Complete", Balloony votes for Gelatin to win. He later joins Gelatin and several other characters to save Four.

In "The Glistening", Balloony votes for Ice Cube to be eliminated. This is only because everybody else was doing so.

Balloony appears to dislike Leafy. In "Getting Teardrop to Talk", Leafy offers to help him but he states he doesn't need help, but accepts being on the same team with her.

In "Lick Your Way to Freedom", on Leafy's loyalty chart, he has a score of 3, the lowest out of his team. Balloony is popped by Leafy in the same episode.

In "Why Would You Do This on a Swingset", it's revealed that Leafy has killed Balloony many times. Balloony is happy after Leafy is eliminated.

In "Get to the Top in 500 Steps", he and the rest of Beep don't want Leafy back on their team when she rejoins.

In "X Marks the Spot", Balloony thanks Lollipop for standing up for him against Leafy. Later when Balloony is annoyed that they have to drive all the way back home, Leafy tries to cheer him up by saying they have more time to bond. Balloony then angrily reminds her that she killed him one time.

In "Take the Tower", Balloony can be seen looking at Leafy with a frown on his face when she's revealed to have gotten the most votes from fans.

In "X Marks the Spot", Balloony thanked Lollipop for sticking up for him and gave her a high-five. When Four pulled on Balloony's fingers because only high-fours were allowed, Lollipop looked concerned for him. Later, Lollipop says that she would change her color to avoid being on the same team as Balloony's killer, Leafy.

In "Take the Tower", feeling concerned when Lollipop doesn't immediately wake up after getting screeched, he tries to help her by telling Four to pat her, indirectly causing her to get crushed to death.

Balloony appears to be one of the contestants who don't hate Loser for his lie in "The Liar Ball You Don't Want" as he is immediately concerned with what Donut did to eliminate him.

In "Chapter Complete", near the ending, Balloony can be seen standing next to Loser with an interested expression while the latter holds inanimate balloons.

In "Don't Dig Straight Down", when Naily falls past Beep, Balloony questions how she ended up in their tunnel and points out how that makes no sense. When Balloony shows his disbelief that no one is helping him dig, Naily says it's because it's a lost cause. Balloony suddenly realizes Naily is a nail and uses her body to break through the ground until the lava reaches his head.

Balloony and Nickel appear to be friends, for the most part, even though they tend to argue a lot.

In "Why Would You Do This on a Swingset", Balloony and Nickel agree that Fries' strategy in the challenge is good.

In "Fortunate Ben", Balloony is upset that nobody feels bad about Cloudy being injured and expresses this by saying, "Yeah, real pro everybody! Cloudy's doing just fine over here!" Nickel doesn't realize that Balloony is being sarcastic, and takes this literally. Balloony appears to be speechless. They both also try to figure out how they can keep their plane in the sky.

In "What Do You Think of Roleplay?", he gets upset with Nickel for holding a fork in Woody's face. They both fight over the fork until they slip and Balloony ends getting popped.

In "Don't Dig Straight Down", when Nickel boasts about how easy the challenge is going thanks to Rocky's vomit, Balloony tells him that Rocky's acid isn't eroding as quickly as they are falling. When Balloony says that Rocky's stomach is too empty to vomit acid, Nickel sarcastically says "Not if he gets a refill", Balloony takes this as Nickel volunteering to become food for Rocky and tells Rocky to eat him.

In "Chapter Complete", Balloony says that its true that Profily's relationships with both finalists are so complex and date back so far, adding that it must be hard for them to choose.

In "Chapter Complete", when Purple Face steals the BFDI, Balloony says "Was wondering when you were gonna, y'know, do what you do. Makes sense".

In "Getting Teardrop to Talk", he tells Roboty to give their team name to Four, and later jumps off of his antennae in order to get the basket to X.

In "Why Would You Do This on a Swingset", Balloony is shown to be able to understand what Roboty is saying and they both agree flying is the best way to win the contest.

In "Four Goes Too Far", Balloony is sad to see Roboty eliminated, says goodbye to him, and is surprised to see that Roboty has already left. Balloony then calls out his name asking where he is.

In "Chapter Complete", when Balloony mentions when Four pulled his fingers, Ruby says that there was no punchline. Balloony tells her that it also really hurt but she responds that the worst part is that there was no punchline. After judging how Four saying "choo choo!" sounds very nonthreatening, Ruby yells the same phrase, and slaps, telling him rethink what he said. Later, Balloony points out where Four is to Ruby.

Balloony gets popped by Stapy in "The Liar Ball You Don't Want".

In "B.F.B. = Back From Beginning", Balloony tells Teardrop to choose whether he or Blocky is actually him. Teardrop points to Balloony and he admits it's pretty hard to mess this challenge up, and tells her to keep going.

Balloony and Woody appear to be friends. In "Getting Teardrop to Talk" they work together to come up with a team name.

In "Fortunate Ben", he calls Woody a genius for dabbing as it helps their plane stay in the air longer.

In "What Do You Think of Roleplay?", Balloony thinks Nickel is attempting to stab Woody with a fork and tries to stop him.

In "Return of the Rocket Ship", Balloony correctly interprets Woody's incoherent speaking as "salt and vinegar" and eagerly agrees with his challenge strategy.

In "Don't Dig Straight Down", when Rocky does nothing after Balloony tells him to help him dig, he tells Woody to help instead since he has arms.

In "The Escape from Four", a very small Woody sits on Balloony's head as they switch from TPOT back to BFB.

In "Get to the Top in 500 Steps", when Balloony is listening to the noises coming from Four, X tells him he shouldn't stand there. Balloony protests saying he can hear something, but X pulls him away.