"Lick Your Way to Freedom"

Best friends
This article lists the interactions between Balloony and Cloudy. The two have been shown to be very close friends since BFB's start.

In "Lick Your Way to Freedom", Balloony asks him if he got a job, Cloudy gives a sad "Yeah", implying that neither of them like Leafy telling them what to do. Later Cloudy can't believe that Balloony is dead, but Leafy corrects him by saying he's still alive and pumps him with air. Cloudy is horrified to see Balloony inflated with so much air that he pops.

In "Why Would You Do This on a Swingset", Balloony tells Cloudy that he's feeling pressure from being up for elimination, Cloudy is only curious about how many votes he got. Cloudy asks Leafy "Why did you kill Balloony so many times?!", when she tried to defend herself for her past behavior. When Four says the eliminated contestant will go to sleep, Cloudy says he loves sleeping, but Balloony warns him that sleeping is Four's code word for elimination at EXIT. Both are happy to see Leafy get eliminated. In the challenge, Balloony says they could use Cloudy to spin their swing, Cloudy says he knows what he has to do and pushes the swing fifty times.

In "Fortunate Ben", Balloony is concerned for Cloudy's well being when he's disabled. When Cloudy is knocked out, Balloony acts sarcastic with how the team is steering their plane.

In "Enter the Exit", Cloudy reveals that he's starting to miss Balloony because he was a good friend and they probably wouldn't have lost the contest in "This Episode Is About Basketball" if he was alive. When Balloony is recovered, Cloudy is happy to see him. Balloony is surprised to see he's still wearing his bandages and pulls them off.

In "Return of the Rocket Ship", Cloudy asks Four to recover Balloony.

In "Don't Dig Straight Down", Cloudy carries his teammates, Balloony included, away from being incinerated by acid or burnt by lava.

In "Getting Teardrop to Talk", Balloony gets tired of waiting for Cloudy to pull the basket to X.

In "Don't Dig Straight Down", Balloony repeatedly tells Cloudy to turn around every time there's lava or acid in front of them.

In Why Would You Do This on a Swingset, when Cloudy makes barf noises (sounds of vomit), Balloony doesn't seem to mind and instead happily asks if they're getting more salt and vinegar.

In "What Do You Think of Roleplay?", Cloudy gives Nickel and Balloony a/an frustrated/annoyed look when they are fighting over a fork.

In "Return of the Rocket Ship", Cloudy and Balloony have a small argument over their lack of shovels to dig with.

In "Don't Dig Straight Down", Cloudy doesn't seem concerned when Balloony gets killed by the lava, even laughing after he's dead and says "It's nice to be short for once, right Rocky?".

Cloudy watches in horror as his friend is about to die. 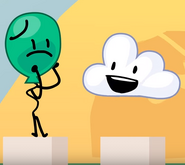 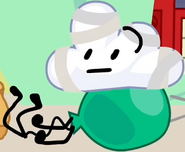 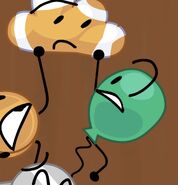 Add a photo to this gallery
Relationships
Retrieved from "https://battlefordreamisland.fandom.com/wiki/Balloony_and_Cloudy?oldid=2638847"
Community content is available under CC-BY-SA unless otherwise noted.