Battle for Dream Island Wiki
Register
Don't have an account?
Sign In
Advertisement
in: Articles proposed for merging, Items, Season 4 items,
and 3 more

The contestants on Battle for BFDI

They come in a variety of colors, such as green, yellow, purple, blue, red, maroon, etc.

Balls first appeared in "Don't Lose Your Marbles", where they were only red balls and one maroon ball, the red balls were used in the episode challenge, they were scattered across an area for the contestants to find them and return them to the Announcer. However, if a contestant were to return the maroon ball, their points would be reduced. Rocky was also an apparent source of red balls, which allowed both him and Tennis Ball to do the challenge.

They appeared again in "This Episode Is About Basketball" for the episode challenge, that was to throw balls in a basket to weight it down to make the basket fall into a buzzer. A ball smashed a window in Cloudy's Collection. Black Hole also sucked up some of the balls. The balls also broke one of the baskets. 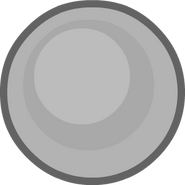 A pile of balls.

Recommended characters being hit by the balls.