Battle for Dream Island Wiki
Register
Don't have an account?
Sign In
Advertisement
in: Characters with unknown genders, Characters, Recommended Characters,
and 5 more

Spongebobvideopants (Bally), simondomino (Marble)
Bally and Marble are two recommended characters who first appeared in "Half a Loaf Is Better Than None" as a part of Announcer's marble collection.

Bally and Marble share the same basic appearance. Both are round, limbless marbles that can withstand hydrochloric acid.

Bally is blue in color compared to the other marbles, and Marble wears a black top hat.

Bally and Marble do not speak. Appearances without notes are non-speaking.

In "Half a Loaf Is Better Than None" after Announcer offered the contestants 15 bonus points, he dumps his marble collection with Bally and Marble into the 10 foot deep vat of hydrochloric acid. Many Recommended Characters and all of the contestants except Tennis Ball jump into the vat and all die. Tennis Ball then remarks that he has a magnet, which attracts Announcer's marble collection with Bally and Marble in it, earning him the 15 bonus points.

Sometime between "The Escape from Four" and "X Marks the Spot", they have seemingly been relocated to the plains around the Bathrooms and placed on a wooden shelf.

Bally and Marble make a reappearance after a 9 year absence in "X Marks the Spot", where they are seen on the shelf where Coiny kept his glue that Lollipop swapped for paint. They are seen with redesigned assets notably lacking outlines. 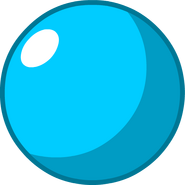