Barf Bag is a female contestant in Battle for BFDI and was one of the former 30 recommended characters who had a chance at joining the game during "The Reveal" and "Reveal Novum", but she failed to get in the game, only receiving only 3 votes, along with Naily, Tree, and Saw.

Barf Bag also appeared with Taco in "Vomitaco" as a representation of the Barf Bag Challenge.

Barf Bag also had a chance to join Battle for Dream Island Again, but placed 52nd with only 78 votes, and was once again flung to the LOL.

Barf Bag, along with the other TLC prisoners, had a chance to join IDFB, but she only got 293 votes.[1]

Due to her brain being constantly doused in vomit, Barf Bag is assumed to be stupid by the other contestants, especially Lollipop. She believes that no one will take her seriously because a few people don't treat her with any respect.

She is seen to be caring for other contestants, as shown when she spared Teardrop in "Lick Your Way to Freedom" and is empathetic, showing that in that same episode she noticed that Bracelety missed Ice Cube. She appears to be selfless, as she also chose to help iance get away from the lava over saving her own life in "Don't Dig Straight Down".

Despite her brain being placed in her vomit, Barf Bag also appears to be one of the smarter objects, as she used scientific proof to try to convince Lollipop that she isn’t stupid. However, it is unknown if her evidence was legitimate. Despite this, she has slow reflexes and/or a slow memory.

Overall, Barf Bag is a nice and rational person who seems more sympathetic to her fellow objects than some of the other competitors.

As Water Bag, she is more energetic and childish, similar to Gelatin, though the hot spring water may not have affected her brain, just her personality.[BFB14]

Imagine having to carry around a bag of vomit 24/7. Barf Bag doesn't have to imagine. Barf Bag has a high opinion of herself, believing she is smart and often sensible.

Some people don't think that highly of Barf Bag, because they incorrectly believe the barf molecules pollute her brain, which makes her incredibly upset. After all, she answered a difficult quiz question for her team correctly!

Did You Know?: When Barf Bag feels like throwing up, she cannot use herself to collect her barf, because that would have no effect.

Barf Bag was first recommended as Baggy. She, the contestants, and the other recommended characters except for Tennis Ball fell in the vat of hydrochloric acid trying to obtain Bally and Marble.

Barf Bag was first recommended as her current form in "Vomitaco". The challenges were represented by Barf Bag herself, and Taco.

She was recommended as Paper Bag in "Bowling, Now with Explosions!". She was part of the large crowd watching the Cake at Stake.

Barf Bag was handpicked out of the hundreds of recommended characters to join Season 1 in "The Reveal". Her audition tape is her sitting and accidentally breaking and spilling out vomit.

However, in "Reveal Novum", it is revealed she got 3 votes to join, so she, along with Naily, Tree, and Saw, was sent to the Locker of Losers, not before damaging the Announcer in one way or another.

Barf Bag was given another chance to join but got 78 votes. She is once again treated with the Locker of Losers.

Barf Bag was given yet another chance to join, in IDFB, but she didn't get enough votes to join. Tennis Ball recommends using her to contain Rocky's vomit.

In "Getting Teardrop to Talk", her first speaking appearance, Barf Bag tries to correct Pillow with the fact that Teardrop can't talk. However, despite being correct, her correction was criticized by Pillow herself, and more prominently Lollipop, who says that the "barf molecules" inside Barf Bag's head cause her to be unintelligent. Eggy tries to correct Lollipop and defend Barf Bag, saying that it isn't Barf Bag's fault that her brain is infected.

She appears later with Lollipop, telling her she can "prove herself" if she was on Lollipop's team. However, she is rejected, citing her assumed "unintelligence" as a reason, and forms a team out of anger, with Spongy. She and Bracelety both use Spongy to help her team get their basket to X.

In "Lick Your Way to Freedom", she helps her team lick Teardrop out of a jawbreaker. She spares and lets Teardrop go back to her team, and she shows empathy for a saddened Bracelety. However, Firey Jr. says that Bracelety will "get over it".

In "Why Would You Do This on a Swingset", she tries to explain to Lollipop how her barf doesn't make her dumber, but to no avail, as Lollipop tries to "wiggle" Barf Bag's arms instead. She, along with Gelatin and Spongy, later attempts to help her team spin their swing with her barf.

In "Today's Very Special Episode", she first appears as one of the objects who climbed Bell's string. She later appears after the second Cake at Stake intro and is deemed safe at 711 votes. When catching her cake, Barf Bag spins, causing the vomit in her to fall off her and land onto X and the remaining cakes, so the rest of her teammates but Donut (whose cake flew past his hole and eaten by Bottle) and Bracelety (who was eliminated with a record amount of votes) got vomit-filled cake.

She is seen later, being zapped by Lightning for the first time, and falling off Bell's string. She appears later, telling Four to see her team's creation. Her team is safe from elimination.

While she doesn't have any lines in "Fortunate Ben", Barf Bag first appears being angry at Gelatin for stealing Bracelety's signs and using them for the prize for Death P.A.C.T.'s Cake at Stake. However, she is seen happy shortly after. She later appears in her team's paper airplane, and since her team didn't manage to hit the ground, her team wins immunity.

In "Four Goes Too Far", Barf Bag once again doesn't have any lines. She is only seen twice: looking worried by Donut injecting the Twinkle onto himself, and during the passing of the Twinkle to other objects. She never was infected with the Twinkle, and her team is safe, as no one on her team still had the Twinkle as the timer ran out.

In "The Liar Ball You Don't Want", she is first seen putting a rubber dome on Eggy's head. She finally has a line: "He saved you!", despite not being shown doing anything in the challenge (Naily brought the ball, but Needle stabbed and went through Naily's head off-screen). Her team is safe.

She is later seen nervous to answer the next question, even after Donut tried to give her "pieces of cake". Barf Bag blames it on her reflexes, which are too slow. Lollipop chimes in and says that what's causing Barf Bag's nervousness and her slow reflexes is her "barf molecules", prompting Barf Bag to say "Shut it, LolliPOOP!" That expands their rivalry.

Question three is "what is snow + gasoline", which is glue, but Barf Bag does not know the answer. She tries to search for the answer, to no avail. Donut then proceeds to ask her to recite what he said during his heroic speech, which only his teammates - including Barf Bag - heard. That was when she answered, and she answered correctly, so her team is safe.

In "This Episode Is About Basketball", she asks X to clarify what the ninth challenge was. She is also heard complaining when A Better Name Than That is safe, due to Blocky throwing Tennis Ball and Basketball onto his team's basket. When Gelatin suggests they use Bomby to throw balls, she tells Donut that he's taking a step in the right direction.

In "What Do You Think of Roleplay?", when Firey Jr. thinks Gelatin is fake because he hadn't used Bomby to win the challenge, Barf Bag says that he's stopped using Bomby since BFB 9. Barf Bag then proposes that Naily is fake due to her lack of nail puns recently, but she says she stopped because Firey Jr. told her it was annoying earlier on. Barf Bag seems displeased with him for this.

Shortly after, Firey Jr. thinks Donut is the fake because he hasn't been mean. Barf Bag asks what gave him the impression, to which Firey Jr. replies with the fact that he was eliminated first in BFDIA. Barf Bag defends him by saying he was standing by his principals. That's when Firey Jr. believes that Barf Bag is the fake. She tells him she's not fake and asks Spongy if he thought so too, which he agrees to. Naily then asks if Spongy is the fake due to him just sitting around, but Barf Bag says he always does that, once again to the agreement of Spongy.

When Team Ice Cube! can't figure out the fake before all the other teams, they lose the challenge and are up for elimination. The faker was revealed to be Spongy, who was actually Tree. The real Spongy is upset about the team not finding him and asks if they know anything about him. Barf Bag tries to assure him that they do, but he isn't convinced.

In "Return of the Rocket Ship", Barf Bag is first seen with Spongy, who futilely tries to sail Paper Planes. Barf Bag says that while she does believe in him, they are running out of planes, she almost drowned, five times and have not even asked Four for permission to use the planes.

She talks with Taco, who is grumpy because her team doesn't want to talk with her, and Barf Bag is the only one around. However, Barf Bag declines, stating that one of Taco's mutual friends is Lollipop, her arch-rival, and is busy hanging out with Spongy. Before Taco goes, Barf Bag tells her to start caring about her teammates' opinions of her, though she is unheard. Barf Bag suggests to Spongy that they play some table tennis, but Spongy refutes, saying he wants to play ping-pong.

Barf Bag is later seen at the episode's Cake at Stake. She gets souped by Four for being the first one safe, though the hot soup scalds her. Barf Bag and Donut see Firey Jr. off.

Barf Bag and her team, led by Gelatin, is later seen jumping in the hole iance made. They later land on Bubble, who iance thought had popped, but Bubble somehow manages to carry the entirety of Team Ice Cube!. (However, Flower would later fall onto Spongy, adding extra weight enough for Bubble to pop.)

Later, Team Ice Cube! starts to dig to the left, and eventually uncover something. Barf Bag states, "Whoa... What is this place?"

In "Don't Dig Straight Down", the location Barf Bag has revealed is revealed to be a buried forest. She ends up having her body punctured by Naily, causing her to get woozy from a lack of barf. Donut has to patch her up and has Bomby dip her in (unknowingly warm) water. This makes her wake up, feeling very energized. She realizes the water inside her is warm and realizes how unnatural it is for lakes to be this warm.

Barf Bag and Team Ice Cube! utilize Spongy's large friction to escape the buried forest that is now filling with lava. When she makes it out of the hole, via Bomby's explosion, she hugs Gelatin and sarcastically thanks Spongy. She is one of the first objects to die when the lava spews towards the surface as she tries to warn iance of the incoming lava.

Having not been recovered in "The Four is Lava", Barf Bag does not appear, though her team is up for elimination. 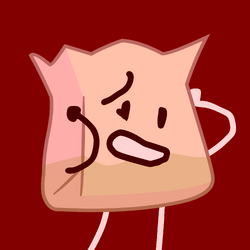 Characters
Retrieved from "https://battlefordreamisland.fandom.com/wiki/Barf_Bag?oldid=1644751"
Community content is available under CC-BY-SA unless otherwise noted.