This page is about the relationships and interactions between Barf Bag and the other characters.

Barf Bag is known for being a very nice contestant and is often shown to be very kind to most of the contestants that she's interacted with. She only appears to have conflicts with anyone who thinks her intelligence is low or is just rude.

In "Reveal Novum", she, along with Saw, Naily and Tree, are angry that they failed to join BFDI and hurt the Announcer in some way before they get launched off.

Status: Enemies, on Bell's side

Bracelety and Barf Bag are good friends. She and Barf Bag helped carry Spongy, using him as a trampoline in "Getting Teardrop to Talk". Barf Bag empathizes for a saddened Bracelety in "Lick Your Way to Freedom".

Despite this, she had no problem with Gelatin throwing away all of her belongings in "Fortunate Ben".

Prior to "Don't Dig Straight Down", Barf Bag had no interaction with Bomby, though she has shown that she cares for him as she gets upset with Gelatin when he almost suggests blowing him up to win in "This Episode Is About Basketball".

In "Return of the Rocket Ship", they sit together during Cake at Stake.

In "Don't Dig Straight Down", when Bomby decides to ignite himself, Barf Bag is extremely concerned for him and even tries to talk Bomby out of it, but is then grateful since he insists.

In "Why Would You Do This on a Swingset", Barf Bag feels inspired by Donut's speech.

In "Four Goes Too Far", Barf Bag is grossed out when Donut injects the Twinkle of Contagion into himself with syringe.

In "Questions Answered", Donut asks Barf Bag why isn't she answering for their team in the quiz challenge. Barf Bag responds, saying her reflexes are too slow. Later, when Barf Bag does get Donut's question right, Donut gets very excited that someone on his team finally got the question right.

In "This Episode Is About Basketball", Donut doesn't believe that Gelatin is over wanting to kill Bomby, Barf Bag informs him that he's taking a step in the right direction.

In "What Do You Think of Roleplay?", she is confused as to why Firey Jr. would refer to Donut as mean and justifies his behavior in BFDIA.

In "Don't Dig Straight Down", she explains to Donut that she needs liquid in her when she starts leaking. When she becomes conscious after being filled with warm water, she thanks Donut for caring about her. She then repeatedly tells Donut that she feels great. When she realizes the water in the lake is way too warm, she explains to Donut that that shouldn't be possible unless they are around something with a lot of heat. When Donut sacrifices himself for Spongy, she seems upset, and scolds Gelatin when he makes a joke out of it.

In "Getting Teardrop to Talk", Eggy suggests it's not Barf Bag's fault that her brain is infected with barf molecules. Barf Bag then takes that as an insult.

In "The Liar Ball You Don't Want", Barf Bag places a popper on Eggy's head, which closes on her face. It is more likely that she did this out of having fun and not out of being mean.

Status: Minor enemies (on her side)

While Barf Bag and Firey Jr. haven't interacted very often, they both discuss who they think the impostor on their team is in "What Do You Think of Roleplay?".

In "Return of the Rocket Ship", Barf Bag admits that Firey Jr. wasn't really much of an asset to their team and him being eliminated with such a large number might as well be his first victory.

In "Questions Answered", she greets Gelatin.

In "This Episode Is About Basketball", she defends Gelatin after he suggested using Bomby to throw balls into their team's basket, saying that he's "taking a step in the right direction".

In "Don't Dig Straight Down," she scolds Gelatin for using her as a landing pad. When Gelatin makes a joke out of Donut's death, Barf Bag scolds him again. However, when they escape from the lava and get onto the surface, she hugs him. When Gelatin then suggests getting the emerald next to Four, Barf Bag agrees.

Barf Bag and Naily are likely friends. In "Getting Teardrop to Talk", they both work together to get the basket to X.

In "What Do You Think of Roleplay", she suspected Naily as the impostor because she wasn't making nail puns. She sides with Naily however after finding out that Firey Jr. told her that her nail puns were annoying.

In "Don't Dig Straight Down", she is upset when Naily rips her, telling her it really hurt.

In "Getting Teardrop to Talk", while Lollipop, Eggy, and Pillow are discussing Teardrop's disinterest of everything, Barf Bag suggests that she does care, but she can't say anything because she can't talk. Pillow responds, saying "That is a ludicrous thought". Barf Bag later flutters her arms in frustration, and Pillow says, "Look, the fluttery arms, she does not care."

Status: Minor enemies (on her side)

In "Getting Teardrop to Talk", after the conflict with Lollipop, Eggy, and Pillow, Barf Bag asks Spongy if he will take her seriously. He says yes, relieving Barf Bag. The two are also the first to form Team Ice Cube!.

During the challenge in "Why Would You Do This on a Swingset", Spongy, Gelatin, and Barf Bag work together to swing quickly for their team.

In "What Do You Think of Roleplay?", Barf Bag tries to reassure Spongy that they do know about him, due to not being able to realize he was the impostor for their team.

In "Return of the Rocket Ship", Barf Bag and Spongy appear to have tried unsuccessfully sailing multiple paper planes. She tells Spongy that she's truly supportive of him when Spongy accuses her of thinking he can't sail a plane and later tells Spongy that she isn't ditching him when she leaves to speak with Taco. She pulls Spongy out of the water and after Taco leaves asks if he wants to play table tennis.

In "Don't Dig Straight Down", Barf Bag gets the idea to use Spongy's body on a steep hill to get the entire team away from the rising lava and then tries pulling him up with her team to no avail. When Spongy refuses to let Barf Bag in his jet to safety (along with the rest of Team Ice Cube! minus Donut, who was already dead at the time), she appears upset, having believed that she'd made up with him for not remembering him. When she and Gelatin make it to the top, she sarcastically thanks Spongy for giving them a ride. 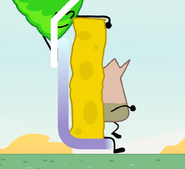 In "Return of the Rocket Ship", Barf Bag, in an annoyed matter, talks with Taco and refuses to hang out with her since she's busy with Spongy. Taco states that it's been so long since they've talked implying they use to be close friends before. Barf Bag tries to tell Taco that she should care what her team thinks of her but Taco walks away not listening.

In "Getting Teardrop to Talk", Barf Bag tells Lollipop, Pillow, and Eggy that Teardrop probably did care about what they were talking to her about, but didn't say anything cause she can't.

In "Lick Your Way to Freedom", after freeing Teardrop from a jawbreaker, Barf Bag claims that her team won't kill her and waves her off.

In "What Do You Think of Roleplay?", Barf Bag is surprised to see that Tree was Spongy all along.

In "The Escape from Four", Barf Bag's silhouette can be seen in the crowd of characters trying to pull the eliminated contestants free from Four.

In "Don't Dig Straight Down", Barf Bag approaches the fainted members of iance in an attempt to warn them about the approaching lava. While she observes the hole they came out of, a geyser of lava erupts, killing her, and shortly after, the rest of iance (aside from Flower).

Relationships
Retrieved from "https://battlefordreamisland.fandom.com/wiki/Barf_Bag/Relationships?oldid=1948569"
Community content is available under CC-BY-SA unless otherwise noted.