Arch-enemies
This page lists the relationships between Barf Bag and Lollipop.

Lollipop and Barf Bag are enemies in BFB. Lollipop thinks that Barf Bag's brain is intoxicated with puke, making her dumb. They usually don't get along with each other, and since they have few interactions, they argue every time they meet.

As of "Questions Answered", they remain rivals/archenemies; with Barf Bag leaving for The Power of Two and Lollipop remaining in BFB, what happens with their relationship currently remains unknown.

In "Getting Teardrop to Talk", after Barf Bag tries to correct Pillow, Lollipop asks her to make sure her "barf molecules" are not "infecting" her brain cells, offending her. Barf Bag flutters her arms afterwards, saying that Lollipop, Pillow, and Eggy never take her seriously.

During team choosing, Barf Bag tells Lollipop that she can prove herself by being on her team, but Lollipop tells Barf Bag she isn't going to accept her, due to her "appearance" and the fact that she is "truly infected". Offended once again, she forms a team with Spongy, because he actually enjoys her presence.

In "Why Would You Do This on a Swingset", after Barf Bag tells Gelatin to stop throwing forks everywhere, Lollipop then gets recovered by Four and lands next to Barf Bag. Shortly after being recovered, Lollipop thinks how ruthless the barf molecules inside Barf Bag must be, and tells her that Pie (who exploded earlier) should wear her Fork Repellent. Barf Bag then gets fed up with Lollipop and wants to discuss the "barf molecule thing".

Lollipop thinks that the barf molecules inside Barf Bag's head will lower her intelligence, but Barf Bag tells Lollipop, using "science", that it's not the case. Lollipop sarcastically agrees, and forcefully tries to flutter Barf Bag's arms. Lollipop then tells Barf Bag her arms are wiggling, suggesting that Barf Bag doesn't care about the topic. Barf Bag then tells Lollipop to get her hands off her, and Lollipop, ignoring her, tells her to take a nap instead.

In "Questions Answered", when Barf Bag says that her reflexes are slow, Lollipop says that the cause is her barf molecules. Barf Bag gets angry and tells her to "Shut it, LolliPOOP."

In "Return of the Rocket Ship", Barf Bag mentions Lollipop as one of Taco's friends.

Barf Bag is offended by Lollipop: "Oh my SAP!" 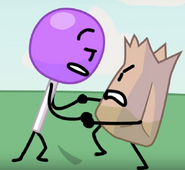