"A Leg Up in the Race" (officially)

Basketball is a female object contestant in Battle for BFDI and The Power of Two. She was first recommended in "A Leg Up in the Race" in BFDI. She is also one of the thirty recommended characters who got the chance to join the game during "The Reveal" and "Reveal Novum". She failed to join, however, receiving only 5 votes and placing 22nd, along with Clock.

Basketball also could have joined BFDIA in "Yeah, Who? I Wanna Know", but she only received 86 votes, placing 44th, and she was flung to the TLC.

In IDFB, Basketball, along with the other characters that were held inside the LOL had a chance to join the show via a viewer voting. Basketball was given a redesign as well, which now has a shinier look, along with lighter colors. She didn't get enough votes to join IDFB though, with only 80 votes.[1]

Basketball finally became a contestant in BFB and competed on the team A Better Name Than That.

After switching in "The Escape from Four", Basketball will be competing in TPOT.

Basketball appears to be a rubber air striped basketball.

BFDI 17 (one of 3 recommended characters)

BFDI 17 (one of 30 recommended characters)

Basketball is very loyal to 8-Ball, usually supporting his endeavors. Basketball also cares about the well-being of her fellow contestants, as she picked Grassy for her team when no one else would, and she felt that Four's violence was getting out of hand.

She's also generally a curious person and can be quite handy, and will solve any problem in any situation regardless of her surroundings, such as helping her team and

to make sure they were still able to defend themselves using Robot Flower from losing in The Liar Ball You Don't Want despite still being on the Moon, although her plan backfired.

Basketball also appears to become nervous under pressure, as shown when she shouts to stop controlling Remote when things went haywire, and appeared to be sweating when she was discovered impersonating Rocky.

Like all basketballs filled with air, Basketball is quite bouncy. Some consider her to be nothing more than a follower, but she is always in the middle of the action.

Basketball is good friends with 8-Ball and Grassy. On the other hand, she's not super close with Golf Ball and Tennis Ball, but does share their affinity for scientific exploration. However, she treats the discipline differently, applying her discoveries more humbly.

Did You Know?: Basketball sometimes worries that she might be too bouncy.

In "A Leg Up in the Race", Basketball appears as a recommended character and is set on fire, possibly dying.

In "Half a Loaf Is Better Than None", Basketball appears as a recommended character and jumps into the vat of hydrochloric acid to try and get the marble collection.

In "Vomitaco", Basketball appears as a recommended character.

In "The Reveal", Basketball appears as a recommended character at Cake at Stake, to watch Blocky get eliminated. Announcer calls her and the others "stalkers". Basketball has been "handpicked out of hundreds" and had the chance to debut in BFDI.

In "Reveal Novum", Basketball only gets 5 votes, which is not enough and is sent to the LOL by the Sender Scoop Thrower. In the end, Basketball and all the other debuters (except David) get crushed by the sun when it sets with the TLC on top of the LOL, continuing from the last episode. Basketball then screams in pain.

In "The Glistening", Basketball appears as a recommended character and votes for Ice Cube.

In "Return of the Hang Glider", she watches the final Cake at Stake.

In "Yeah, Who? I Wanna Know", Basketball doesn't join season 2, with only 86 votes. She and the other contestants who didn't get enough votes get separated from the season 2 cast. Basketball is then sent to the TLC.

In "Welcome Back", Basketball has the chance to rejoin in IDFB. Even if IDFB 2 were to be released, she didn't receive enough votes to join the show. She also tries to escape the LOL by bouncing on the lid until it opens, however it doesn't work.

In "Getting Teardrop to Talk", Basketball is excited and cheers for Loser along with Pencil, Ruby, Bomby, Grassy, Woody, Bubble, & Pie. Grassy and Basketball then discuss how great Loser is. Later on in the episode, Basketball asks 8-Ball if he wants to be on the same team as her because they are both balls, he accepts. In the challenge, Golf Ball plans to have Basketball, along with 8-Ball, weigh down the basket. When Robot Flower knocks Blocky off the tree, he lands on Basketball, who is too bouncy and walks away with Grassy taking her place. Golf Ball later plans to use a trebuchet to get the basket, using 8-Ball and Basketball as weights to bring the basket down. Their team is the 6th safe when the trebuchet is used to fling the basket to X.

In "Lick Your Way to Freedom", Basketball learns about Golf Ball's disrespect for Grassy and appoints 8-Ball as the new team leader.

In "Why Would You Do This on a Swingset", Basketball and Robot Flower remind Golf Ball that she was dethroned as team leader last episode.

In "Today's Very Special Episode", Basketball says she is glad that they listen to 8-Ball. Later, she and Blocky talk to each other about "hearing someone that disrespects people", which is Golf Ball. Ignoring how 8-Ball admitted that he almost made them lose.

In "Four Goes Too Far", Basketball says that Four's becoming more destructive and that they should do something about it. She asks 8-Ball what to do, to which he responds that Golf Ball has the answer. Later in the episode, when A Better Name Than That and

Due to the rocket breaking down, Basketball, her team, and

are stuck on the Moon in "The Liar Ball You Don't Want". She says that she's been inspecting Robot Flower. After she stops TB and GB's eyebrow wiggling, Basketball explains that Robot Flower can give commands to the communicator dish on the ship and that Remote can receive orders from it. She and Tennis Ball use Robot Flower to control Remote so that they can prevent the Liar Ball from landing in their goal, along with

's. However, the ship then loses connection with Remote, which is when Basketball notices something going wrong and tries to take full control of Robot Flower. After Robot Flower breaks the signal due to Remote's bomb, Basketball asks TV if he knew that she decided to break it. As the Liar Ball landed in A Better Name Than That's team crater, they are up for elimination.

In "Questions Answered", at Cake at Stake, Donut communicates to A Better Name Than That using TV. When he moves his hands through TV's screen, Basketball asks if he was able to move things between the Earth and the Moon all this time and tells him to get them back down to Earth. Once Donut sends Earth through the screen so that they can get back on it, Cake at Stake continues, with all A Better Name Than That members far away from him. He tells them they don't have to sit so far, which is followed by all members of the team going inside his hole, which Basketball clarifies is the way they're doing Cake at Stake this episode. She is the 5th safe on the team. When it's between Golf Ball and 8-Ball to be eliminated, Basketball says she hopes the "team leader" doesn't leave, which both Golf Ball and 8-Ball think are themselves.

In "What Do You Think of Roleplay?", Puffball takes over Basketball's body, while Basketball is in the body of Rocky. Golf Ball asks "Basketball" who the team leader is, and she answers that it's Golf Ball. Golf Ball is not suspicious that Basketball was replaced anymore because of this, and says that she can interview some of the other members. Due to Puffball being in her body, Basketball talks in a slightly singsongy way, similar to Puffball, but Golf Ball just sees this as Basketball being good at singing.

Meanwhile, over at Beep's room, when Balloony gets popped, "Rocky" reacts, exclaiming that the noise was loud. Due to Rocky rarely talking, this is a dead giveaway to the team that Rocky is a fake. She tries to correct herself by saying "bulleh", but the team has already identified her as a fake and calls her out immediately after. When Basketball transforms back to her usual shape, she has turned completely orange, and complains about this.

Back at A Better Name Than That, when Golf Ball tries to get an answer out of Grassy, who just replies with "I'm Grassy!", the mock Basketball says the process would be going faster if he "wasn't so basic". Blocky, knowing that she and Grassy are friends, figures out that Basketball has been replaced. "Basketball" then transforms into Puffball. This means her team is safe.

In "Return of the Rocket Ship", Basketball wakes up after hearing Grassy shout and wonders what he needs. She then finds Golf Ball and asks her what the team's plan is for the challenge. Golf Ball refuses to tell since Basketball is "not high enough on the managerial hierarchy" to know. Basketball then asks Tennis Ball to ask Golf Ball what the plan is. He does so and tells Basketball to dig. Basketball thanks Tennis Ball and walks toward the spot. She tells Grassy that it's not fair that Golf Ball distrusts her all of a sudden. TV points out that Basketball was the impostor last episode, to which she responds that it wasn't her fault. Later, Basketball enters Golf Ball's rocket with the rest of A Better Name Than That as they dig toward X's treasure.

In "Don't Dig Straight Down", Basketball and her team find an emerald. She is also the one who is holding the emerald while wall-jumping. She tries to hand the emerald to Four but Golf Ball snatches it to hand in herself. When Basketball sees hands coming out of Four, she gets confused and asks what just happened. Later, Basketball watches Golf Ball preventing iance from getting out, and says that this is Golf Ball's idea of fun.

In "The Four is Lava", Basketball is recovered and is now back to her normal shade of orange. Robot Flower tells Basketball to fix her, so Basketball decides to figure out what she can do to help.

In "The Escape From Four", while asking Four to recover the dead contestants, Basketball notices Four's enlarged bottom (from Stapy slamming a fridge on the floor of EXIT) and comments on it. Four becomes insulted, becomes a spiky twig-like mass, and chases Basketball. It's implied that Four killed Basketball, since she's seen among the people being recovered. Rather than staying with Four, she joins TPOT.

In "X Marks the Spot", she cheers when X is supposedly glued to the ground so that he could host TPOT. X is then snatched away by the Four Colored Team with a lasso and she gasps in shock. 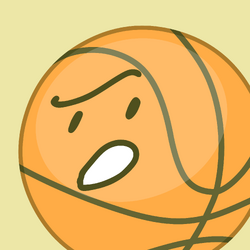