Getting Teardrop to Talk

This article lists the interactions between Basketball and Grassy.

In "Getting Teardrop to Talk", when Basketball says that Loser is a great guy, Grassy says he agrees. Grassy tells Basketball he hasn't been picked yet so Basketball allows him join her team.

In "Lick Your Way to Freedom", Grassy tries to talk to Blocky but he can't pronounce respected, so Basketball helps him pronounce it. Basketball agrees to having 8-Ball as the new team leader due to Golf Ball disrespecting Grassy.

In "Enter the Exit", Grassy sits on Basketball as Robot Flower reveals that Remote sent them a bomb.

In "Return of the Rocket Ship", Basketball wakes up from her nap after hearing Grassy shout and asks if he needs anything. Later, Basketball talks to Grassy about how unfair it is that Golf Ball suddenly doesn't trust her, to which Grassy just responds "I'm Grassy!".

In "You Know Those Buttons Don't Do Anything, Right?", Basketball leaves pre-Are You Okay to make a team with Grassy and Robot Flower. Grassy can also be seen sitting on Basketball many times throughout the episode.

In "The Worst Day of Black Hole's Life", Grassy can be seen sitting on Basketball when Two starts the challenge and when everyone asks Robot Flower her opinion on shapes, with Basketball smiling at him in the second instance. During the challenge, Basketball compliments Grassy, Bell, and Snowball for their stacking, Grassy says "Yaaay!" in response. At the end of the episode, Snowball points out that Grassy did a good job in the challenge and Basketball agrees.

In "Questions Answered", when Basketball tells Donut to bring her team and

back to Earth, Grassy walks by and says "Yeah!" in agreement. 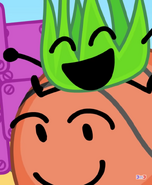