For the baskets in "Lofty", see Nail Baskets.

Air (according to X)

"Getting Teardrop to Talk" (X's Baskets)

Baskets are brown, wooden, bowl-shaped baskets that carry objects and are often floating in the air with a propeller attached to the top using strings.

In "Getting Teardrop to Talk", the baskets were redesigned to use a propeller instead of a balloon. The contest was to retrieve them and then return the baskets to X, who owned them. Most of the baskets remain near X in the air, but one of them (for unexplained reasons) flies into the desert, then The World's Largest Oven, and then inside a pool of lava (possibly the Volcano). This one is followed by

, leading to the death of everyone in the team aside from Saw (who got her handle burnt off) and Dora. In the stinger of the episode, X puts on his baskets and the propellers spin him around. He screams as he is suspended in the air.

They were seen again in "Four Goes Too Far", when Loser had an idea of putting a basket (X hiding inside, in the flashback of episode 9) over The Losers! to prevent them from getting infected with the Twinkle from the challenge. However, in the last few seconds of the challenge, Bell broke the basket in time and Clock got infected, causing his team to lose.

They were used once again in "This Episode Is About Basketball" for makeshift basketball baskets in X's first time hosting a challenge. One of them ended up being broken by Snowball.

The baskets were used for the first mini-challenge in "B.F.B. = Back From Beginning", where the contestants would have to simply hand one to X in order to pass. For the second mini-challenge, Teardrop uses one of the baskets to break open a jawbreaker, freeing Leafy. After having to restart the challenge due to dying, Gelatin decides to use the same strategy as Teardrop, and frees Bubble.

The pile of baskets in BFB 28. 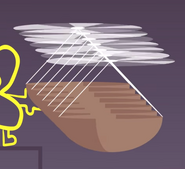 A line of baskets 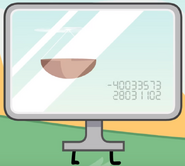 TV showing the coordinates of a basket

Pen blowing the basket to X

Foldy being ripped apart by a basket 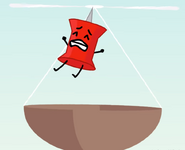 Some of The Losers! trapped under a basket

The Losers! get freed from being stuck under a basket thanks to Loser.

The Losers! under their basket

The Losers! in a basket

Gelatin running to get a basket in B.F.B. 28

Gelatin holding a basket, ready to give it to X in BFB 29

X having a basket on his head from Gelatin, Whilst flower is giving him another basket in B.F.B. 28

X Spinning himself with baskets
Items
Community content is available under CC-BY-SA unless otherwise noted.
Advertisement