Battery is a recommended character and was one of the eligible debuters for TPOT. They failed to join the show though, only receiving 2,507 votes, placing 5th.

Battery is a quiet and happy character. They seem to agree with Avocado's opinions on Two. Battery can also be seen as smart, as they can make science experiments from pure natural electricity.

Battery is a pine green AA-type battery. They don't appear to be based off any specific brand of battery.

In "Don't Lose Your Marbles", Battery makes their debut when two of them fall out of Remote after she had been been dropped by Blocky. On landing, they start to leak battery acid, which kills Snowball and Pencil.

In "The Reveal", Battery appears in Remote's debut audition, where she pulls two of them out and dies.

In "Return of the Hang Glider", they appear in the large crowd of recommended characters watching the final Cake at Stake.

In "Lick Your Way to Freedom", Battery appears as Donut flies over the recommended characters.

In "The Four is Lava", Battery when Four announces the contest loudly enough to be heard from space.

In "The Escape from Four", Battery was one of the 26 recommended characters selected by Two as one of the eligible candidates to become a contestant in Battle for Dream Island: The Power of Two. In their audition, Battery attaches strips of metal to both sides of their body with a light bulb attached at the top. Afterward, the light bulb turns on and they smile at the camera.

Some inanimate recommended batteries were also used by the eliminated contestants to stack up to Four's mouth.

When Rubber Spatula is shown falling through the floor, Battery gasps. Battery reaches the final eight and makes a cat face in response, however, they are only the 5th most voted to join. Battery appears to be annoyed at Two, along with Avocado, due to how predictable they were being with the results. Both then jump through the floor. 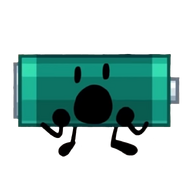 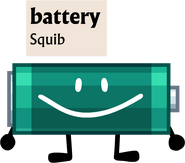 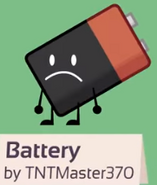 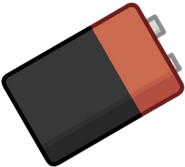