"BFDI" redirects here. For other uses, see BFDI (disambiguation).
For the series, see Battle for Dream Island (series).
For one of the prizes of Battle for BFB, see A BFDI.

BFDI was succeeded by Battle for Dream Island Again, released on June 29th, 2012, with the release of "Yeah, Who? I Wanna Know".

This season involves 20 anthropomorphic inanimate objects (and later, one human[BFDI18]) who have known each other all their lives and are casually living together. But when the host, the Announcer, falls from the sky and tells everyone about the luxurious island known as Dream Island, competition sparks, and everyone begins battling each other for the island.

In episode 1b, the 2nd part of the first episode, the Announcer divided the 20 contestants into two teams of 10: the Squishy Cherries and the Squashy Grapes. The two teams competed in contests at the beginning of every month, and the Announcer put the losing team up for elimination—the elimination ceremony is known as "Cake at Stake". The viewers then decided to eliminate someone between the 1st and 10th of every month. At the beginning of the next episode, the Announcer eliminates the most-voted contestant and sends them to the Tiny Loser Chamber.

In episode 9, the teams reformed, and half of the Squashy Grapes formed a 3rd team (called "Another Name") in the process. During Cake at Stake, the two most-voted contestants would leave the losing team. The winning team would then choose one of them onto their team and eliminate the other.

In episode 12, the teams dissolved, and the contestants competed as individuals. The Announcer then introduced a new point system. The contestants kept their scores throughout the season, and they could earn or lose points, depending on how they did in a contest. At the end of an episode, the three or four contestants with the lowest scores would be up for elimination. The Announcer would then send the most-voted contestant to the Tiny Loser Chamber.

In episode 19, the point system ended, and competitors competed for immunity. One or two people won immunity each episode. The Announcer put the rest of the contestants up for elimination and sent the most-voted competitor to the Tiny Loser Chamber the following episode. This process continued until the final 3. The viewers then decided which of the three would win Dream Island.

In 2008, Michael and Cary Huang created a catalog which featured a comic strip of Firey, Woody, Teardrop, Spongy, and Match. They later decided to do comics, comic strips, and even some series like Total Firey Island, Total Firey Points, and others.

They decided to make a Flash animation series of a contest to win an island called "Dream Island" like Total Firey Island. They decided to release it on YouTube on jacknjellify's channel instead of carykh's channel.

This is the elimination process for Battle for Dream Island; initially, the team that lost last contest is usually put up for elimination. The viewers then vote who they want to be eliminated on the losing Team between the 1st and 10th of each month. At the beginning of the next episode, the elimination ceremony, known as Cake at Stake, commences.

If a contestant is safe, then they will receive a slice of cake or something else. The competitor with the most votes will not get the cake, and will be eliminated from the battle, and thus, sent to the Tiny Loser Chamber. Since the eventual merge of the teams, the contestants that did not receive immunity (or got the lowest scores during the point system stage of the game) are put up for elimination. Typically, 3-4 contestants were put up for elimination during the merge. Occasionally, the contestants themselves got to choose who was eliminated instead.

Many contests reward the winners. Usually, the prize is immunity for the winning team/contestant(s), but sometimes the reward is an eliminated competitor/rival teammate being added/moved to the winning team. Before the merge, contestants could also win a Win Token. If a contestant is up for elimination, they could use their Win Token to erase half of their votes, helping them stay usually safe (except for Needle and Golf Ball) during eliminations. Other rewards (BFDI posters, BFDI DDSs, teddy bears, houses) were also given out prior to reaching a new stage in the competition.

20 inanimate objects, plus the host, Announcer, and David, who joined in "Reveal Novum" make up the main cast. Everyone, excluding the Announcer, compete on the show.

The 20 contestants are divided into 2 teams of 10.

Needle is eliminated. Firey joins the Squashy Grapes after they win the challenge.

Coiny is eliminated and the teams merge.

Match is eliminated and Spongy rejoins.

Starting in episode 10 ("Crybaby!"), the viewers got to create their own characters in the comments section of a video that would make cameos in the next episode. Originally, there were no restrictions on creating characters, however, starting in episode 18 ("Reveal Novum"), only one recommended character was allowed per recommender, and as of episode 23 ("Hurtful!"), no copyrighted characters were allowed to avoid lawsuits.

In "The Reveal", 30 handpicked recommended characters were chosen to be part of a special voting period, with the most voted character joining the competition. The winner of the voting was David, who joined as the 21st contestant of Battle for Dream Island.

There is a total of 25 episodes. The first episode was a double length episode, while the rest of the episodes ranged at around 7-15 minutes each.

There were 2 episodes of the season that had to be re-uploaded due to fatal errors in the originals. The first was Episode 12 ("A Leg Up in the Race"). In the original, Golf Ball and Rocky were shown on the Another Name team, despite the fact that in the previous episode ("Lofty"), Golf Ball got eliminated and Rocky got moved to the Squishy Cherries, and neither of them should have been there. As a result, the episode was taken down, and a new version was uploaded, with the error fixed.

The second was episode 20 ("Gardening Hero"). This episode was originally missing a 30-second portion that contained elimination/rejoin details and the recommended characters for that episode. The episode was later re-uploaded with that part of the episode included. 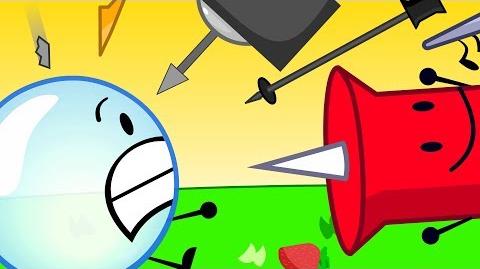 "Want to watch the Full Season of Battle for Dream Island? Look no further! This cartoon compilation has All Episodes of the first season of BFDI! Watch as twenty characters battle for a luxurious island in an elimination-centric monthly animated series!"

Are You Smarter Than A Snowball?

A Leg Up in the Race

Half A Loaf Is Better Than None

Return of the Hang Glider