Battle for Dream Island: Official Character Guide is an American children's book published by Scholastic in 2019 and is BFDI's first published book. It was first discovered in Scholastic's book flyers in the end of August to the beginning of September 2019, and was officially confirmed by Michael Huang[1] and Satomi Hinatsu[2] on the same day. The book was written by Satomi, Cary Huang, and a Scholastic employee. The book is only available in English.

The front cover has Leafy, Firey, Pencil, Pin, and Bubble on the series' normal grass. (Additionally, Taco is featured in a promotional image.) The book includes descriptions of all 64 initial Battle for BFDI contestants[3] and includes tips on how the reader can make their own object show. Each character description has an illustration of the character in BFB's style, along with a piece of trivia. The book's introduction explains about jacknjellify, the Huang twins, the creation of BFDI, and the basic plot and gameplay of the series. As mentioned in the introduction, there is a short quiz at the end of the book. A page at the end has tips for creating your own object show from Cary Huang. The last page is a picture of the whole BFB cast: Four, X, and the 64 contestants, arranged in a gradient based on color. The back cover continues the grass from the front and has Eraser, Teardrop, Bell, Bomby, Pen, Bottle, Woody, and Book, with a summary of the series in the center.

The Lucky September flyer says the book is a Scholastic exclusive, though it was eventually made available for online retail purchases. Scholastic Book Clubs, where the book can be bought from, is only available to schoolchildren and their parents and teachers. A participating teacher is needed to log into the website where the book is listed (clubs.scholastic.com), and can only be delivered when the teacher has finished the book orders. The two flyers that are given to children list the book as $5, on Scholastic Book Clubs' website it is $4.50, and The Scholastic Store lists it as $6.99.

As of February 23rd, 2021, the book has been unavailable to purchase for quite some time. It is unknown if it will get reprinted, or possibly even remade with new, more up to date information.

In January 2022, it was announced on the Jacknjellify store that the book got reprinted and will be made purchasable in the near future. It will have a new price tag of $11.99 and will presumably be available to ship worldwide much like other JnJ store items.

These descriptions are on Scholastic's book flyers. The Kids Picks September flyer uses an exclamation point after "characters" instead of a period.

"THE OBJECT SHOW THAT STARTED IT ALL!"

"The creators of the YouTube series tell all about your favorite characters. With tips on how to create your own object show!"

These are from the book's Scholastic listing on Scholastic Book Clubs.

Short Summary
"From Eraser to Tennis Ball—meet the quirky contestants of the hit animated series and predict who will win.

This description is from the book's Scholastic Score listing.

"What do you get when groups of inanimate objects battle one another for the chance to live on a fictional island resort where robots wait on you hand and foot—if you actually have hands or feet, that is? You get Battle for Dream Island, the animated YouTube series. BFDI, as fans call it, is a raucous parade of crazy characters, each with their own personalities, hang-ups, friends, and enemies. This character guide is indispensable if you want to know all there is to know about BFDI." 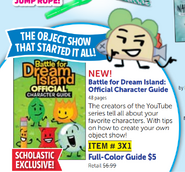 A second photo of the front cover seen here

Back cover of the book

Scan of the last page.