BeiBei is a character that appeared in The BeiBei Squisher, a jacknjellify video from 2008. She is a stuffed animal version of the character BeiBei, who is one of the Fuwa, a group of mascots from the 2008 Olympics. Her name is taken from the first part of Beijing, a city in The People's Republic of China, which is where the 2008 Olympics took place.

BeiBei is a fish that resembles a giant panda. The waves that are on her head are based on a design in traditional Chinese paintings.[1]

In "The BeiBei Squisher", she is squished by a Rube Goldberg machine.

BeiBei as she appears in The Olympic Adventures of Fuwa 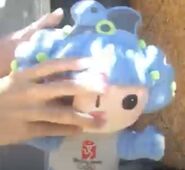 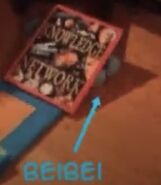