Battle for Dream Island Wiki
Register
Don't have an account?
Sign In
Advertisement
in: Recommended Characters, Characters, Females,
and 8 more

View source
watch 02:30
Who is Bell?
Do you like this video?
Play Sound

Bell is a female contestant in Battle for BFDI and The Power of Two and was one of the 30 recommended characters who had a chance at joining the game during "The Reveal" and "Reveal Novum", failing to get into the game with only four votes, along with Cloudy.

Bell's BFDI debut and BFDIA design is made of a brown metal, with a blue ribbon around the middle, and has a string attaching her to the top of the screen. It is unknown where the string leads to, or where it hangs from. Bell may also have the ability to detach and regain her string, as seen in multiple episodes.

Bell also failed to join BFDIA in "Yeah, Who? I Wanna Know", because she received only 90 votes.

Bell's IDFB redesign features a shiny metal and a hinge. Bell's ribbon is also removed. (Oddly, in the storyboards, she is still drawn with her ribbon.)

Bell had a chance to join IDFB through viewers voting, along with the other TLC prisoners. She got 41 votes.[1]

Bell competed in BFB on the team Free Food until "The Escape from Four". In TPOT, she's competing on the team The Strongest Team on Earth.

Bell appears to be a brass bell. Bell's main body is copperish-brown, and her shine is yellow. She has a long black string that seems to endlessly reach into the sky.

Bell seems to be a bit melodramatic and forgetful, as she doesn't recognize that Puffball can fly. Her voice is generally peppy and can be quite whiny whenever someone climbs her string and will ding rapidly in discomfort. However, for the most part, Bell is perky and sweet. She likes to use figurative language in her sentences.

She also has trust issues and is sometimes unforgiving to others for things that happened in the past, as shown with Taco.

She is not generally rude but occasionally has her moments, such as in "You Know Those Buttons Don't Do Anything, Right?", when she is disgusted when Marker tries to join her team and flings him away.

Ding, dong! Bell is a metal bell made of bell metal. She has a string to swing on, even though no one knows what it's attached to. She doesn't like when others pull it or climb on it, but believe us, many have tried. Apparently, this string can conduct electricity, because 12 characters have been zapped by Bell's string at once.

Bell is close friends with Taco, Yellow Face, and Gelatin.

Did You Know?: Bell can ring at whatever note she desires.

In "Half a Loaf Is Better Than None", Bell runs into a vat of hydrochloric acid to retrieve the Announcer's marbles.

In "The Reveal", Bell is one of the 30 handpicked recommended characters who could be voted into the show. Their joining campaign shows them dinging with a big smile.

In "Reveal Novum", Bell and Cloudy both got only 4 votes to join, and they are blown away by Fanny. Despite neither getting flung, they both end up in the LOL.

In "Return of the Hang Glider", Bell is in the crowd of recommended characters on the bleachers, watching the last Cake at Stake.

In "Yeah, Who? I Wanna Know", Bell only gets 90 votes to join the show and is sent to the Tiny Loser Chamber.

In "No More Snow!", Bell can be seen in the Evil Forest with Grassy and 8-Ball.

In "Welcome Back", Bell can be seen swinging back and forth against the lid of the TLC, trying to get it open. She is given a chance to join the show by being voted out of the TLC.

In "Getting Teardrop to Talk", her first talking appearance, Bell launches Gelatin's forks and topples his creation, which makes Yellow Face happy. The forks she launched pop Bubble twice. After Four arrives, and kills Pin and Pillow, Bell is sad that they might not ever get them back. Four then shows that he can recover them through his hand. She is later persuaded by Yellow Face to join his team. After Foldy dies, Bell lost all hope because there was no one at the time who could reach the basket, but doesn't know that Puffball can fly. Marker asks her to turn around and she gets scared by Puffball, dinging rapidly. Her team is safe when Puffball pushes the basket to X.

In "Lick Your Way to Freedom", she only appears, arguing about the recovery of the objects who died in the previous episode. Her team is safe, finding Lollipop.

In "Why Would You Do This on a Swingset", she appears when she gets on her team's swing. Her only line is telling Fries that he doesn't need to be so pushy to Puffball.

In "Today's Very Special Episode", Eraser asks Bell what her string is attached to. Bell laughs and says she'd prefer not to tell. Eraser insists that he wants to find out and that he will find out, and starts climbing her string. Bell starts making noise trying to get someone to help her. Liy hears her, asking what's the ruckus. Bell tells her that Eraser is climbing her string, which just intrigues Liy to do the same as she never noticed her string before. Bell continues making noises for help and is approached by Snowball who volunteers to help punch off the people climbing her string. Bell is grateful at first until Snowball says he has to climb her string in order to do so, to her frustration. Shortly after Four introduces Team Ice Cube! to Cake at Stake, a vast amount of climbers are shown to have climbed Bell's string, but Donut does not want to climb her string, citing that it would be "disrespectful" to her. She thanks Donut shortly afterward.

In "Fortunate Ben", Bell gets trapped inside his team's paper plane by Stapy which causes them to fall out of the sky. His team manages to win thanks to Stapy using his staples to break the landscape.

In "Four Goes Too Far", she is first seen in the heart scene, getting the Twinkle once. She is later seen with her teammates, avoiding a twinkle-infected Pen, but he passes it onto Marker.

She is later seen with Taco. When Taco says, "Hey Bell! Isn't the moon beautiful tonight?", Bell accidentally mistakes Taco flirting with her and stutters bashfully. Taco then tells her to actually look at the moon and when she does, Bell gets the Twinkle. With 30 seconds left, Bell apologizes to Free Food for failing them, but Eraser tells Bell her string is long, hence it makes her strong. He tells her that The Losers! are the only team on earth left who don't know she has the twinkle. Encouraged, Bell breaks through the Losers' basket and infects Clock, making his team lose at the last second.

In "The Liar Ball You Don't Want", she is seen with Taco again, and tells Donut off, saying he wants to "take everything they love, and destroy it". She is shocked after Taco is squished with the Liar Ball. In the challenge, Bell dents Woody with one of her sharp edges and assists Free Food in getting the liar ball, but Naily stabs her in the face and takes the ball for her team.

In "This Episode Is About Basketball", Stapy asks Puffball to make sure Bell and Foldy get their cakes since they were both dead during Free Food's first Cake at Stake.

In "Enter the Exit", Bell is recovered and meets up with her teammates. At the ending, Taco tries to talk to her, but Bell snaps and thinks it's a trick, like Taco did in "Four Goes Too Far". Bell ignores the fact that Taco wants to have a normal conversation with her and her apology, saying that sorry won't cut it and that she doesn't trust Taco anymore. This all happens whilst Lollipop watches them.

In "What Do You Think of Roleplay?", Bell only appears when Yellow Face figures out that Puffball is the impostor on their team.

In "Return of the Rocket Ship", after Yellow Face advertised the Fork Attractant, Bell, along with Marker and Lollipop, was intrigued by the ad, and she stated that she wished to be blessed with its exquisite viewing experience. Fries keeps interrupting however, annoying Bell. Bell asks Fries why he's acting with such urgency, and Fries answers that it's because Four and X are about to announce the next contest. Both hosts are just standing blankly, so Bell isn't sure if Fries is right until Eraser backs him up. They insist that at any moment, X will float into the air. They all wait for X to do anything, with Bell starting to lose her patience at one point, when X suddenly bursts through the ground instead.

Later on during the challenge, when Golf Ball demonstrated the MMR on her, Bell's thought was that she was glad that the top of her string was connected to something giant, though Blocky quickly interrupted the whole thought. In exchange, however, Bell read Golf Ball's thought of sending people to her incinerator.

In "Don't Dig Straight Down", Bell cheers with the other members of Free Food when Four declares their team safe.

In "The Four is Lava", Bell is one of the few Free Food members who weren't killed by the lava. She is first seen with Foldy standing on her while she floats above the lava. They almost get burnt by a splash of lava from Spongy's cannonballs. Puffball uses Bell's string to catch one of Spongy's cannonballs in order to fling it back at him and destroy a portion of his ship, rendering it unable to fly. Afterwards, Puffball says they should go to Four and Bell agrees. Bell later makes it to Four with Foldy and Puffball, making their team safe. Bell then asks Four to recover her dead teammates, and he does so, recovering them all on her string.

In "The Escape from Four", Bell is first seen moving towards Four to watch him struggle to suck up Spongy. As everyone moves in closer, Bell questions what was going as they heard a weird noise coming from Spongy's holes. It's revealed to be the eliminated contestants, who Bell attempts to free by pulling on Spongy's leg with everyone else. Later, Bell quits BFB to compete in TPOT.

In "SOS (Save Our Show)", Bell appears in a scenario where Two didn't appear and BFB didn't split. However, she quits BFB in agreement with Fries because of Four being bad at hosting.

In "You Know Those Buttons Don't Do Anything, Right?", she teams up with Foldy, but rejects Marker, throwing him away. The two become members of The Strongest Team on Earth. During the challenge, she lifts herself, Robot Flower and Grassy to the top of the building. When she tries to go back down however, Two won't let her since it's against the rules. Her team just barely wins the challenge, and she is angry at Two for being the reason their teams did so bad. Two thinks they should stop blaming them, and Bell angrily retorts that they should learn to speak up. She then gets in on beating up Two with the other contestants. 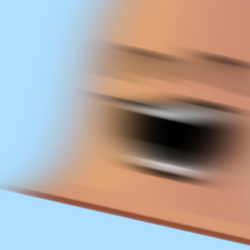