BFB: "The Escape from Four"(Quit to Compete on TPOT)
TPOT: TBA

This character has transparency in his design.

Black Hole is a male contestant on Battle for BFDI and The Power of Two. He was first seen in "Gardening Hero" (known as "Vortex" back then), pulling Spongy in, and eventually being sold because of budget cuts. He is a former recommended character that could have participated in BFDIA. However, Black Hole only received 269 votes and was sent to the TLC.

He also had another chance of joining the game in IDFB, until it was postponed. He got 323 votes, placing him 10th.[1]

Black Hole's event horizon is black, surrounded by an accretion disk that is various shades of purple, blue, and orange.

In "Gardening Hero", Black Hole was extremely large and was called Vortex by maristanaweb. In BFDIA, Black Hole was smaller. In BFB, he was crushed down further by Four, becoming the size of an average contestant and allowing him to compete.

Black Hole is a calm and collected individual, never raising his voice. Valuing life, he is empathetic and patient.

Despite Black Hole having immense power, with even his presence being able to destroy a variety of objects, he does not use his power for malicious intentions, showing that he has a high level of self-control and willingness to interact with others without destroying them.

Black holes in outer space may be proud that they are the centers of galaxies, but this Black Hole is actually quite humble! Just like real life, anything that comes near Black Hole gets sucked in, torn up, and pulled apart.

Despite his seemingly destructive nature, Black Hole is great to have on your team. Everyone is constantly asking for his help. Black Hole can be a know-it-all of sorts and is spouting trivia all the time. Still, he's an easygoing cosmic character.

Did You Know?: Black Hole's mass is the mass of 20 suns, which makes him a danger to the structural integrity of Earth.

In "Gardening Hero", Black Hole pulls Spongy inside of him, before eventually being sold because of budget cuts.

In "Return of the Hang Glider", Black Hole watches the final Cake at Stake of the season with the other recommended characters.

In "Yeah, Who? I Wanna Know", Black Hole gets 269 votes to join, placing 26th overall. He is then flung into the TLC with the other contestants who didn't make it into the season.

In "Welcome Back", Black Hole is given a chance to...

In "Getting Teardrop to Talk", Flower demands Black Hole to help her remove the lid from a jar of cyanide pills. He is reluctant to do so, but decides to help anyway and starts flying towards earth. He doesn't seem to notice that Flower's jar is open as he continues moving closer to earth, absorbing the cyanide and everyone, causing Four to come and squeeze him into the same size as everyone else. Therefore, he can actually compete, despite his powers being beyond mediocre compared to other black holes, which are so strong that not even light can escape. He seems to be happy with the fact that he's now a normal size. Black Hole joins Pie's team after hearing how she hasn't killed anyone, wanting to be taught how not to kill. During the challenge, he reminds Pen that they have to bring a basket to X. After this is (very quickly) achieved, Pen celebrates by giving everyone a high five. This includes Black Hole, but this results in Pen's arm being warped.

In "Lick Your Way to Freedom", Black Hole does "the thing", which is zooming above jawbreakers, breaking them open. Pen is able to find Foldy in one of them, making them safe.

In "Why Would You Do This on a Swingset", Black Hole is seen next to Pen. After Bottle says she's excited to start preventing death, Pen is hit by Gelatin's fork, pushing him near enough to Black Hole to be sucked in, killing him, to which Bottle simply says "And Pen is dead." During the challenge, Tree asks Black Hole if he could push the swing. He says he can't do that, but can instead pull "like there's no tomorrow". Remote says that he's wrong because there is a tomorrow. Black Hole explains that he can bend space and time so much that time will slow down, causing there to literally be no tomorrow. Tree tells him not to do that and to instead just do his "pully-attracty stuff". Black Hole pulls his team's swing in circles 50 times and the team is safe.

In "Today's Very Special Episode", Pen is about to ask Black Hole something, until Tree interrupts him and tells him he can't rely on Black Hole to do everything for him. However, he then looks through his problem-solving book which states "If you have a problem, ask Black Hole" so he asks Black Hole if he can draw. He says he can't but can form an accretion disk, which is not helpful. Later, most of the team is trying to block the forks that Liy is attracting from hitting Four. After Tree realizes that Black Hole could suck up the forks, Pen shouts for him. However, due to him having a low hearing sense (pointed out by Remote), he can't hear him. Later, everyone on the team (besides Pillow) run to Black Hole. Pen and Bottle ask him to suck the forks away from Four, which he does. His team ends up losing the contest due to Pen's drawing.

In "Fortunate Ben", when Four threatens to "dismemble" Death P.A.C.T.. Black Hole says he has no limbs so he wouldn't mind dismemberment. During Cake at Stake, Black Hole is safe with 1,415 votes and receives a fortune cookie. After Liy is eliminated, Pie asks what she was a switch for, and Black Hole says that he thought she was just a light switch. During the challenge, Black Hole gets obliterated for flying, which was not allowed, and he is not seen for the rest of the episode.

In "Four Goes Too Far", Black Hole is recovered by Four. He is later mentioned when Firey claims he had the twinkle. Coiny then slaps Firey for this, pointing out that Black Hole doesn't have eyes.

In "This Episode Is About Basketball", Pen throws many balls into Black Hole, but this time his involvement does not help, and his team completes the challenge themselves.

In "Enter the Exit", he and Pie find out that Remote sent a bomb to stop A Better Name Than That when they were hacking her in "The Liar Ball You Don't Want". After Pie tells her that what she did wasn't preventing death, Remote says that it was so they wouldn't lose. However, Black Hole tells her that the team's objective isn't winning, it's preventing death.

In "Get to the Top in 500 Steps", Black Hole first appears nervously nodding his "head" to Four that he will not fly to the top of the 500-step staircase. He later appears with his team at the base of the staircase. Bomby and Tennis Ball fall near him after Flower pushes them off the staircase, but Black Hole uses his gravity to launch Bomby back up to the top in order to prevent his death, while Tennis Ball bounces back up. Black Hole boasts at how simple it was to save Bomby's life. The same two contestants are then knocked off accidentally by Dora when she runs up the stairs, and Black Hole once again launches Bomby back up. Later, when Pie (who is killed by Flower in her rush to win) is recovered and begins to slowly walk up the staircase, Remote is concerned and asks Black Hole what Pie is doing. Black Hole explains that Pie knows that Flower will kill her if she gets ahead, so she is preventing her own death. Remote is angry, saying that that will make their team lose, upon which Black Hole calls her a slow learner due to the words the two exchanged in the previous episode. Pie then falls off the staircase and is rocketed directly to the top by Black Hole's gravity, where she presses the buzzer, securing Death P.A.C.T.'s safety and putting iance up for elimination.

In "What Do You Think of Roleplay?", Bomby approaches Black Hole. Black Hole expects gratitude from Bomby for saving him last episode, showing how he starts off saying that he's welcome for saving his life. But Bomby instead complains about him sucking his banana up and claims he owes him a banana. Black Hole protests, saying he doesn't owe him anything because he saved his life twice, but Bomby continues to demand a banana. Black Hole eventually agrees to find a banana before his attention is brought to Four and X giggling.

In "Return of the Rocket Ship" Four throws soup at Bomby's banana during their Cake at Stake, sending it into Black Hole, to his annoyance, as he says that he just got Bomby that banana.

Later, he stops his team in their tracks when they start heading for Evil Canyon, complaining that they failed to notice that Pillow was killed by Four and that they were running towards the Evil Canyon's spikes which would impale them to death. His team then starts fluttering their arms at Black Hole to his disappointment. They eventually realize Black Hole's point and go with him to ask Four to recover Pillow, however she's not dead, so the team enters Four's mouth to look for her.

In "The Four is Lava", Black Hole repeatedly swings his teammates towards Four's mouth so that they can stick their arms out of it. Tree claims that allowing the trio to continue sticking their hands out of Four is a waste of time, but Black Hole claims that after finding Pillow, the activity is harmless. He also points out that this is the first time he's seen Remote this happy and that it is good for her. However, wiggling their arms too many times makes Four forcefully pull his entire team out of his mouth, which also makes Death P.A.C.T. safe from elimination.

In "The Escape from Four", Black Hole is first seen flying towards Four to watch them struggle to suck up Spongy. Black Hole later quits BFB and switches to TPOT after the BFDI is replaced with A BFB.

In "You Know Those Buttons Don't Do Anything, Right?", Black Hole learns that Four brought back the original BFDI as a prize, but agrees that switching back isn't worth it since Four is too untrustworthy. When picking teams, Death P.A.C.T already has seven people and everyone figures they could just stay together again. Except Pen, who leaves to switch to be with Eraser. After gaining three new members, Black Hole says they should just be Death P.A.C.T. Again.

For the challenge, Remote decides that they should jump from the building and use Black Hole's gravity to swing them to the top. After climbing many flights of stairs, Remote checks to see if they're high enough by throwing a plant out the window, but Black Hole ends up sucking it up. After Remote receives a new energizing battery, she changes plans and carries the entire team to the top, leaving Black Hole who is still waiting for his teammates to jump down. After they reach the top, they aren't able to call him since they're too high. Tree attempts to use a megaphone, but drops it and Black Hole sucks it up. Remote then sacrifices her battery for the team to throw to get Black Hole's attention. The battery lands next to Black Hole and he figures that they must want him to fly up. Unfortunately, he flies too slowly compared to the elevator carrying the other team in the bottom 2, and his team is up for elimination.

Items Black Hole has sucked in 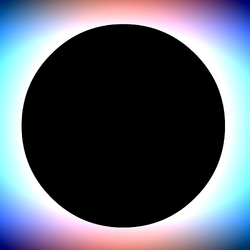