Battle for Dream Island Wiki
Register
Don't have an account?
Sign In
Advertisement
in: Characters with unknown genders, Characters, Recommended Characters,
and 4 more

Papiomike
Blender is a recommended character that was up for voting in "You Know Those Buttons Don't Do Anything, Right?" to join Battle for Dream Island: The Power of Two. They were recommended by Papiomike and first appeared in "Four Goes Too Far", and later in "The Liar Ball You Don't Want".

Blender is level headed but can make reckless decisions. This is shown by them stuffing their blending container with blueberries and plans to blend them up as a stunt, which later backfires. Or, how when Camera wants their lens cap, Blender takes it away from Onigiri which causes them to have a sad look on their face.

Blender is a countertop blender. They have a hot pink base with a torus-shaped button on the right and a smaller button on the left. Their blending container is made of glass with a black lid.

In "Four Goes Too Far", Blender appears as A Better Name Than That sleds down a hill.

In "The Liar Ball You Don't Want", Blender gasps with the over recommended characters over Loser's elimination.

In "The Escape from Four", Blender was one of the 26 recommended characters selected by Two as one of the eligible candidates to become a contestant in The Power of Two. In their audition, Blender put blueberries inside of their jar and blended them up. However, due to overflowing, they exploded out of the top and flew onto the camera, covering the screen until the next contestant's audition. 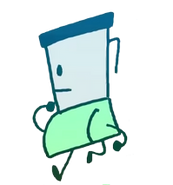 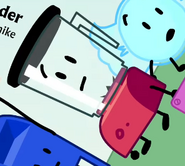 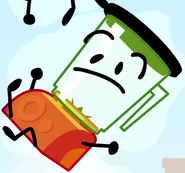 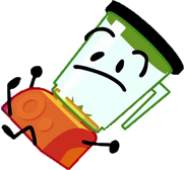