Best friends
This article lists the interactions between Blocky and the duo Pen and Eraser. Blocky was almost always around Pen and Eraser in BFDI. All three of them are on separate teams in BFB, but they still manage to be close friends. The three are/were close friends with Snowball in Battle for Dream Island, but have since not interacted.

In "Take the Plunge: Part 1", Blocky complains to Eraser about how bossy Golf Ball is. Blocky, Pen, and Snowball are not amused by Eraser's analogy.

In "Take the Plunge: Part 2", when picking teams, Pen and Eraser pick Blocky. Blocky high fives Pen when he walks to the team.

In "Barriers and Pitfalls", Pen and Eraser are the first to realize that Blocky is missing and volunteer to go find him. They are surprised to see that he wasn't eaten and Blocky explains that the fish missed him by a bit. Pen and Blocky then try to free Pencil from the fish monster's tongue.

In "Are You Smarter Than a Snowball?", when the Announcer is about to say who else is safe, Pen says "It's got to be Blocky!" During the challenge, Blocky steals the test answers. When he presents them to Pen and Eraser, Eraser offers him a high-five, but Blocky hits him too hard and sends him flying off beyond the horizon. Pen tells Blocky he doesn't need a high-five. The two of them copy down the test answers, but get caught, and have their scores reduced to zero.

In "Sweet Tooth", when Announcer is about to announce who has zero votes, Pen exclaims "It's got to be Blocky!" When the ice chunks smack Eraser and Pen away, Blocky says, "Yeah! Elbow room!" When Blocky is eliminated, Pen is in denial. He says that Blocky is a great guy and that they're friends.

In "Power of Three", Pen says that Blocky's elimination was sad.

In "Cycle of Life", as a part of Blocky's Funny Doings International, Blocky tells the viewers to set up a trap that causes Ice Cube to fall and die ad infinitum. Eraser follows these instructions and sets up the trap.

In "Don't Lose Your Marbles", Blocky brings Bubble's ball over to Pen and Eraser to show that he's got himself a ball. Pen repeats that all he has is an apple. Eraser says he found one too, so they go to turn them in. When Pen finds a ball hanging from the sky, he says it's totally unsuspicious and says it's perfect, Blocky agrees and tells him to go turn it in.

In "Half a Loaf Is Better Than None", Pen calls out to Blocky for rescue when he's on a cliff. Later, all three of them cheer for Snowball in the bread loaf contest.

In "Insectophobe's Nightmare 2", after Pen exclaims that the cancellation of BFDI is great, Blocky asks him "How so?" When Pen explains that that means they should be released, Blocky concludes that it's true.

In "Return of the Hang Glider", Blocky is standing in a group with Pen, Eraser, and Snowball when they request to be let onto Dream Island.

In "Yeah, Who? I Wanna Know", Pen tells Eraser, Blocky, and Snowball to look at the BFDIA voting results.

In "Getting Teardrop to Talk", Blocky uses Saw to saw a pentagon that Pen and Eraser are afraid of. Later Pen tries to make sure he, Eraser, and Blocky stay on the same team.

In "What Do You Think of Roleplay?", Blocky, Pen, and Eraser are seen sitting on a bench chatting. Blocky says he'd like to do more pranks but can't because there are no recovery centers. Eraser states if he ever needs a hand with one he'd be down to help. Pen says he would too but his team is supposed to prevent death, and Blocky completely understands.

In "The Four is Lava", when Eraser is recovered, he jumps towards Blocky and Pen who are happy to see him back.

In "You Know Those Buttons Don't Do Anything, Right?", after joining Eraser's team, Pen asks where Blocky is and Eraser somberly states that he left them.

In "Enter the Exit", Blocky arranges Pen, along with Match and Needle, in the shape of Four in an attempt to bring him back.

In "Paper Towel", Eraser demands that Blocky replace the paper towels, and watches the dangerous maneuver from behind a wall.

In "You Know Those Buttons Don't Do Anything, Right?", when Pen joins Are You Okay with Eraser, he asks where Blocky is. Eraser tells him he left them, in a grim voice. Eraser is obviously saddened by this. Pen asks what he means by that, to which Fries informs him Blocky left to compete in BFB for a BFB.

In "Are You Smarter Than a Snowball?", Blocky doesn't seem to mind when he accidentally hits Eraser.

In "Half a Loaf Is Better Than None", Eraser gets mad at Pen when he says "WHICH IS", claiming it's his line.

In "Bowling, Now with Explosions!", Blocky calls Pencil, Pen, and Leafy losers for playing with "dolls". He then snatches them, unknowingly saving them from some kind of curse. This in turn inflicts the "curse" upon himself.

In "Paper Towel", when Blocky wants a paper towel, Eraser reminds Blocky that they are not for him to have. Blocky waits for Eraser to go to the bathroom and then starts taking them, which angers Eraser. Eraser chases Blocky and eventually squirts him with some water, immobilizing him.

In "Getting Teardrop to Talk", Eraser leaves the other two to join another team when he hears Yellow Face call out "FREE FOOD!" Then Blocky for some reason isn't interested in teaming with Pen and leaves when he hears the words "funny doings" from Grassy. Later, when Eraser asks why he is not near his pals anymore, Pen angrily (and sarcastically) responds to him, "Gee, I sure wonder!"

In "The Liar Ball You Don't Want", Pen is okay with having the Liar Ball thrown into A Better Name Than That's goal, despite how Blocky is on the team.

Eraser helps with one of Blocky's pranks. 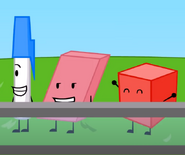