Enemies
This article lists the interactions between Blocky and Bubble.

Bubble and Blocky are clearly enemies from both sides. Blocky has never been shown to hate Bubble for how she acts, he only sees her as someone who's fun to kill, regardless of how she feels about it. Blocky does at least show restraint against killing her when she can't be brought back as seen in "Return of the Hang Glider".

In "Take the Plunge: Part 1", Blocky tries to use Pin and Needle to pop Bubble. Bubble is bothered by this, asking "What was that for?". Blocky just responds that he's in the mood to hurt someone.

In "Take the Plunge: Part 2", when picking the teams, Blocky agrees to beat up Bubble for Flower, since Snowball wouldn't, and chases her a bit before popping her with his foot.

In "Barriers and Pitfalls" as a part of Blocky's Funny Doings International, Blocky drills a hole into the Bubble Recovery Center and pours tacks in, popping Bubble infinitely.

In "Don't Lose Your Marbles", Bubble finds herself a red ball, but Blocky kills her and takes it. Bubble later tells Pencil and Match about Blocky popping her, saying he's so mean.

In "Vomitaco", Blocky throws a bowling ball at the alliance.

In "Bowling, Now with Explosions!", when Bubble knocks over no bowling pins, Blocky laughs. Later, when presented with the opportunity to subtract points from anyone, he decides to start by draining all of Bubble's points.

In "Return of the Hang Glider", Blocky would prefer Bubble not win Dream Island because she's fun to kill.

In "Vote Yoylecake", Blocky interrupts Bubble's speech and starts attacking her (not canon).

In "X Marks the Spot", Ruby reveals that Blocky has murdered Bubble 2,763 times. Bubble says it is nice to not be on the same team as him.

In "Take the Tower", Blocky tries to take Bubble down, but Four stops him by grabbing him.

In "Let's Raid The Warehouse", when Blocky calls Woody a crybaby and gets ready to attack him, Bubble stops him, saying that Woody is not a baby and that he shouldn't have treated him like one.

In "Crybaby!", Blocky skis directly into Bubble, popping her, and doesn't acknowledge it.

In "Half a Loaf Is Better Than None", after acting scared in response to the next hurdle for the third time, Blocky says "that's enough, Bubble." But when he actually sees the final hurdle he says that she might have a point.

In "Return of the Hang Glider", when Flower pops Bubble permanently, Blocky gasps along with Pen, Coiny, and Firey. 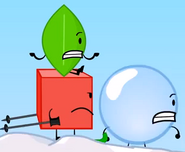 Blocky about to carelessly kill Bubble

One of Blocky's pranks involving Bubble

Blocky is about to kick her.

Blocky drains all of Bubble's points.