While Blocky and Golf Ball haven't had the friendliest of interactions at first, they are shown getting along in BFB since they are on the same team, for the most part.

In "Take the Plunge/Part 1", Blocky complains to Eraser about how bossy Golf Ball is.

In "Lofty", Blocky is among the crowd that laughs in the faces of Golf Ball, Tennis Ball, Firey, Coiny, and Rocky.

In "Reveal Novum", hearing Blocky's demand that they escape, Golf Ball says "That's easy for you to say! You left the Tiny Loser Chamber in episode nine!" to which he replies that he's back, and he doesn't want to stay much longer. Later, Golf Ball asks Blocky what he suggests they do to escape when the TLC opens. When the TLC becomes submerged underwater, Golf Ball tells Blocky that it's all his fault.

In "Getting Teardrop to Talk", Golf Ball gives Blocky the job of climbing a tree with Robot Flower since they have arms. Blocky asks what Golf Ball will do in the contest and gets angry when she says she's managing the team. After having his fall cushioned by Grassy, Blocky finds a hole in Golf Ball's plan and seems to find it humorous at her expense when she doesn't appear to have an answer to his question. Golf Ball instead uses Tennis Ball's trebuchet, showing Blocky that him climbing the tree had nothing to do with the challenge and was just to help him build character. As a result, Blocky kills her out of anger for his pointless job.

In "Lick Your Way to Freedom", Blocky tells Golf Ball that Grassy's been telling the team that she hasn't been treating him with respect and starts listening to 8-Ball.

In "Why Would You Do This on a Swingset" and "Today's Very Special Episode", Blocky ignores everything Golf Ball says, as he is only listening to 8-Ball. In the latter episode, he tries to stop Golf Ball from drawing while yelling "Treason". Even after Golf Ball and 8-Ball made up, Blocky refers to Golf Ball as someone who disrespects people.

In "Return of the Rocket Ship", in a visual representation of how the MMR works, Blocky's thoughts say "GB SUX" and Golf Ball frowns when she receives this.

In "Don't Dig Straight Down", when Golf Ball notices that the grass around her died, Blocky claims that it's a result of Golf Ball being stinky. When she continues to obsess over keeping one of the teams underground, Blocky tries to stop her, but she doesn't listen making him exclaim in anger.

In "Insectophobe's Nightmare 2", Golf Ball asks Blocky what he hears outside the TLC, Blocky responds that he doesn't understand what's going on at the moment but he did hear the Announcer say BFDI is cancelled.

In "Four Goes Too Far", when Golf Ball asks her team if everything is lined up in order to multiply Four, Blocky checks with his hands and says it looks like it.

In "The Liar Ball You Don't Want", they work together in order to ensure that

don't lose. At one point Blocky even gives Golf Ball a command, she angrily protests at first which makes Blocky nervous, but then decides he's right and listens, relieving Blocky.

In "What Do You Think of Roleplay?", when Robot Flower keeps trying to get Golf Ball to reveal she's the fake, Blocky tells her that they can worry about that later.

In "Return of the Rocket Ship", when the team enters Golf Ball's rocket, Blocky demands an explanation on why they are in her rocket ship when there are no emeralds in space, along with the ship being broken. Golf Ball tells Blocky to shut up and to start rotating the satellite dish, Blocky does so and they start drilling into the ground.

In "Return of the Hang Glider", they work together to find who stole Dream Island.

In "Getting Teardrop to Talk", when Blocky is knocked out of the tree by Robot Flower, Golf Ball tells his teammates to cushion his fall. Golf Ball later states that she only had Blocky and Robot Flower climb the tree because physical exertion builds character.

In "Lick Your Way to Freedom", Blocky tries to get Golf Ball recovered not realizing that when he killed her that there was no way for her to come back. When Golf Ball is freed from the jawbreaker she thanks her teammates.

In "Four Goes Too Far", they work together to get rid of Four.

In "Questions Answered", Blocky can be seen smiling at Golf Ball for being the one who will answer for the team.

In "Return of the Rocket Ship", Blocky angrily asks Golf Ball what an MMR is and Golf Ball replies that it means (Mutual Mind Reader) and proceeds to demonstrate how it works by pointing it at Cloudy, Saw, and Bell. Blocky is amazed at its capabilities, calling it overpowered. 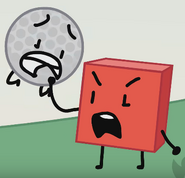