This page is about the relationships between Blocky and Snowball. Although they didn't have any interactions in BFB, the two are very good friends with each other, as they were both known to be bullies in BFDI and are one of the "cool guys" (along with Eraser and Pen).

In "Take the Plunge: Part 1", Snowball and Blocky are seen talking to each other, along with Pen and Eraser.

In "Take the Plunge: Part 2", Snowball talks to Coiny and Blocky about how Flower is getting on his nerves.

In "Insectophobe's Nightmare", Snowball chooses Blocky over Firey when choosing the teams, saying that he's better friends with him.

In "Crybaby!", Snowball high fives Blocky because he is safe with 2 votes.

In "Half a Loaf Is Better Than None", Blocky, along with Eraser and Pen, cheer for Snowball in the bread loaves contest.

In "Return of the Hang Glider", Snowball is seen with Blocky, Eraser, and Pen when Firey is deciding who should go on this island and who should not.

In "Yeah, Who? I Wanna Know", Snowball is briefly seen in the beginning with Blocky, as well as Eraser and Pen, when Pen says "Hey, guys, look!" and points at TV.

In "Take the Plunge: Part 2", When Needle picks Snowball for her team, Blocky teases them, saying that they're in love.

In "Insectophobe's Nightmare", Snowball throws Blocky in a pile with the rest of his teammates and ties them up so he can drag the entire team.

In "Lofty", when everyone runs out of nails, Blocky bites Snowball's balloon first.

In "A Leg Up in the Race", Blocky says "bye bye" with a smile before Snowball is extracted of 18 points.

Snowball talking to Coiny and Blocky 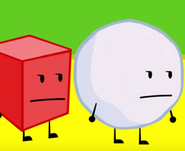 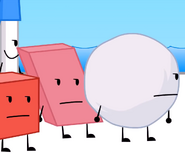