This page is about the interactions between Blocky and Woody. Blocky tends to always bully and prank Woody. In late BFB however, Blocky gains some respect for Woody, starting in BFB 21 when he learned that Woody isn't as paranoid as he believed he still was.

In "How Loe Can You Grow?", when Taco tells Blocky that Woody is missing because he kicked him into the air, he admits that he misses him.

In "Let's Raid The Warehouse", after some convincing, Blocky realized that the gift he gave Woody was insulting to him, alluding that he wants to change his attitude towards Woody.

In "Who Stole Donut's Diary?", when Lollipop asks Woody what he was doing at the time the diary was stolen, he decides to prank them and say he was on his way to jet flying class. Blocky is amazed and surprised that their first time being able to understand Woody was him pranking everyone. Woody acts nervous around Blocky but smiles when he realizes Blocky is happy with him. They then proceed to high five.

In "The Game Has Changed", Blocky laments to Woody about how bad his podcast idea was. After Blocky was declared to be eliminated, Woody hugs him, upset that he's out. Blocky tells him it'll be okay and to pull some pranks for him while he's gone. Blocky then remembers the past couple pranks Woody has pulled (also showing Blocky holds no negative feelings about Woody switching with him to get kicked by Flower last episode). He realizes Woody would make a good replacement for him and transfers the ownership of Blocky's Funny Doing International to Woody. After the transference, Blocky has Woody do a prank: to buy Flower's fashion line only to destroy it by pushing it off a cliff. As Blocky gets sent to the BRB, Blocky tells Woody to make him proud. At the stinger of the episode, Blocky receives a notification regarding a new video of Woody's Funny Doings International, which the prank involves Woody detaching the Ferris wheel Leafy and Firey were riding on. Blocky praised the video, calling it "pretty legit".

In "SOS (Save Our Show)", Blocky and Woody sit together at the beginning of the episode. Blocky realizes that Woody doesn't enjoy pranks and assures him that he doesn't have to do them to impress him, and that they can find something else for them to do. Woody then calms down Flower in his new program Woody's Fear Destroyer International, and Blocky calls his success in helping Flower amazing and say he's proud of him. Blocky then gets a new show idea called Woody's Fear Destroyer International.

In "Chapter Complete", in the shot of everyone enjoying Four's party, Blocky and Woody are together. Another shot shows Woody trying to get over his fear of the color grey while Blocky and Taco root for him. At the ending, they do another show together, as Gelatin says that they need guests for it.

In "Let's Raid The Warehouse", Blocky shows that he remembers Woody being afraid of the color gray and bubbles, and suggests getting him a box. Likely because Blocky's spent most of the series bullying Woody, he acts noticeably indifferent to Taco complimenting him and Firey for being empathetic to Woody. When they get back home, Blocky hands Woody his gift and prematurely celebrates, thinking he would love it.

In "Who Stole Donut's Diary?", Blocky notices that Woody is missing after the diary disappears and calls it suspicious.

In "Take the Plunge/Part 1", Woody screams upon seeing Blocky, then gets kicked into the air by him.

In "Insectophobe's Nightmare", a picture of the eliminated contestants shows a scared Woody being held still by Blocky so Flower can kick him.

In "The Glistening", Blocky kicks Woody into the air when finding out that he has less votes than him.

In "X Marks the Spot", Blocky kicks Woody into the air after agreeing not to save X.

In "Take the Tower", Blocky forces Woody to go on the bridge to the other team's tower despite Woody not actually wanting to.

In "How Loe Can You Grow?", Blocky chases Woody and then kicks him into the air. He later was about to get Woody to enter Spongy's spaceship, forgetting that he kicked him earlier.

In "Let's Raid The Warehouse", Blocky tells his team to raise their hands if they want to be receivers. Woody does so nervously, but Blocky ignores him. Blocky allows Flower to be one, since she spoke up, and gets annoyed that no one else is volunteering. Taco then points out to Blocky that Woody has had his hand up the whole time. Blocky shows he was aware and didn't pick Woody because of how meekly he was raising his hand.

On the train ride, Taco determines that Blocky has been in a bad mood because Woody got to have his way. When Taco asks what gift Woody would like, Blocky finds some spiky gloves and says Woody would like one to the face. Blocky is shocked and angered that Woody hates his cardboard box, telling Woody it was supposed to be the perfect gift for him. For the first time, Woody fights back at Blocky, making noise about the awful gift. Blocky gets angrier, calling Woody a crybaby, since Woody made them lose the challenge, which is his fault, and grabs him, but gets stopped by Bubble before he can do anything.

In "Who Stole Donut's Diary?", Blocky angrily mad at Woody so he chases him and then kicks him into the air Offscreen.

In "Fashion For Your Face!", before Woody gets kicked by Flower for saying her fashion line was "OK", he swaps himself with Blocky, and Blocky is kicked into the sky.

In "SOS (Save Our Show)", Blocky invites Taco to join in on a prank with him and Woody. While Blocky is explaining the prank, Woody is noticeably uncomfortable, and Blocky stops in confusion. Much later, Blocky attempts to do another prank with Woody but he runs away.

In "Chapter Complete", Blocky and Woody fight each other along with everyone else over A BFDI inside the golden bus.

Blocky and Woody in the final two 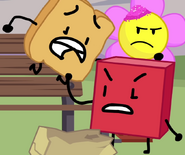