Bomby is a male contestant in Battle for Dream Island Again, IDFB, Battle for BFDI, and The Power of Two.

He was the first recommended character ever shown in BFDI, first seen in "Lofty", as well as one of the 30 recommended characters that could've joined BFDI in "The Reveal" and "Reveal Novum", but lost to David, becoming the runner-up of the debut. His most prominent recommenders were jaysillyboy, luigifan00001 and Englishcreamcakes.

In BFDIA, Bomby was a member of Team No-Name but later switched to W.O.A.H. Bunch in "Zeeky Boogy Doog" after being threatened to be ignited. He enjoys eating food most of the time, and he is often seen holding a slice of strawberry cake and/or a banana. Bomby's voice is sped up and high-pitched (not high-pitched anymore in BFB and TPOT), making it hard to understand him when he talks. Bomby survived season 2 long enough to appear in IDFB.

Bomby returned in BFB and competed on Team Ice Cube!. He later quit BFB in "The Escape from Four" and will be competing in TPOT.

Bomby appears to be a fuse bomb from cartoons or pop culture with a round black-grayish body and a beige fuse.

He was partially wrapped in white bandages to cover the damage he had in "Why Would You Do This on a Swingset", all the way until "Don't Dig Straight Down".

Similar to Woody, Bomby is quite jumpy and gets scared very easily, as often seen when his fuse is lit, as it causes him to blow up. Additionally, they both speak incoherent gibberish often. He has an affinity for food, and he is often seen snacking.

Bomby can be temperamental and irritable when he loses his food, as he snapped at Black Hole for sucking up to his banana, despite the fact Black Hole saved his life. Bomby also does not seem to value life, especially his own, calling it "cheap".

Nonetheless, Bomby cares about his friends, and shows courage if prompted - in spite of his often-timid demeanor, in "Don't Dig Straight Down", he willingly ignited himself to get his teammates to safety, killing himself in the process.

Bomby looks like an old-fashioned cartoon bomb. He's a lot like Woody, but his primary fear is exploding. Bomby always seems to be holding a slice of cake and a banana. Don't mess with his banana, because he will get angry. Bomby doesn't speak much, and when he does, he's hard to understand because he talks quickly and his voice is very high-pitched. You could say he has a short fuse.

Did You Know?: Bomby's greatest fear is bowls.

Bomby makes his debut as a cameo in "Insectophobe's Nightmare". He was recommended by jaysillyboy in that episode. He was seen eating a banana and a piece of cake, and Pin was on top of him.

"Lofty" was the first episode that Bomby had a major appearance in; he was sitting on the ground when Firey fell down after his balloon got popped and ignited Bomby's long fuse, thus causing Bomby to explode.

In "Reveal Novum", Bomby was one of the 30 recommended characters who had a chance to enter the game. He was recommended by englishcreamcakes, jaysillyboy, jmarston123, DylanMultiProduction, Luigifan00001, simondomino and Voxezi. Other names for him included TNT, Teh Boom, Nuclear Bomb, and Bob-omb. He placed 2nd in voting with 73 votes, only losing to David, who received 29 more votes (102). However, he does not get sent to the Locker of Losers because he blew up almost instantly after being flung away.

In "Don't Pierce My Flesh", Firey lit up Bomby's fuse (again), causing him to explode. As a result, Spongy fell and crushed the Announcer, thus causing Firey and Flower to make replacement speaker boxes.

In "Yeah, Who? I Wanna Know", Bomby was one of the characters that could join the game. He got 582 votes, placing 6th place. Bomby initially was on the "newbies" team but switched to the stronger team after Firey read that they can switch teams. His team won the challenge, so he was safe from elimination.

In "Get Digging", Bomby wasn't seen much in the challenge, as Bomby was told by Fries to dig underground like the others from their team, due to the prospect of "ingredients" down there.

In "Insectophobe's Nightmare 3", Bomby received only 237 likes, placing 4th for the prize. He got 60 dislikes, the 3rd fewest, receiving a slice of cake. In the challenge, he followed his team into their glass box. Later on, Nickel suggested that they ignite Bomby to kill all of their bugs. Firey follows suit, and Bomby explodes, as a sacrifice for winning the challenge for Team No-Name.

In "Zeeky Boogy Doog", Bomby was revived from Teardrop's new Hand-powered Recovery Center. Coiny realized that they needed to recruit more team members, so he asked Bomby to join W.O.A.H. Bunch. Bomby angrily refused, but Coiny threatened to ignite Bomby with Firey. Fearful, Bomby agrees and ran over to Coiny's team. In the challenge, Coiny noted that No-Name's Dream Island was much better than theirs. To destroy it, he threw Bomby down the factory, destroying Dream Island, and all members of No-Name.

In "Get in the Van", Bomby's team was safe from elimination, and his team began walking to Yoyle Mountain.

In "No More Snow!", Bomby ran away and panicked because a bowl of petunias fell. Coiny then told Bomby to stop panicking because it was just a bowl of petunias. Bomby then came back to keep walking with the rest of W.O.A.H. Bunch. Bomby was one of the 6 contestants who didn't die in the episode and operated the HPHPRCC at the end.

In "The Long-lost Yoyle City", when Pin asks Bomby to throw a stick across the Goiky Canal, he screams "NO!"

In "Welcome Back", Bomby only has two lines, and blew up later in the episode for unknown reasons.

In "Getting Teardrop to Talk", Bomby is first seen reacting to Naily nearly being punished by Pencil. He then notices Loser and holds a sign up saying "Loser" in all capitals when everyone is reacting to his appearance. Later he is seen with everyone else when Four announces the prize. He reacts the same way as everyone else does. When teams are forming, he, along with Firey Jr., joins Spongy's team, which later gets named "Team Ice Cube!" by Bracelety. Firey Jr. later tells Bomby to grab Bracelety while she's still incapacitated, to which Bomby complies. When they're actually in the challenge, Gelatin says that they can ignite Bomby to get up to the basket. Bomby runs away in a scared and negative way.

In "Why Would You Do This on a Swingset", the camera gets zoomed in on Bomby, Gelatin and Spongy during one point of Donut's speech. He cheers along with everyone else after his speech. However, their team's plan doesn't work, as their swing set is destroyed and Bomby is partially exploded for unknown reasons. His team is up for elimination.

In "Today's Very Special Episode", he, along with everyone else on his team except Donut, is seen climbing Bell's string during the elimination. Bomby is first safe with only with 684 votes. He is seen with bandages where he exploded in the previous episode (which have stayed on him until Don't Dig Straight Down). Once Lightning electrocutes Bell, he is seen shocked and falls along with the rest of the climbers.

In "Fortunate Ben", Bomby is still partially exploded, and Gelatin suggests that Bomby should be used to blow up the other team's paper airplanes, to which Bomby appears apprehensive towards and Donut angrily declines it, stating that Bomby is their friend and teammate.

In "The Liar Ball You Don't Want", Bomby is one of the people to greet Loser. After Loser says a lie, Bomby is seen surrounding him. He also triggers the intro, by flying up from a popper and doing Four's intro pose. He is later seen when Taco is crushed by the Liar Ball.

In "This Episode Is About Basketball", Gelatin says that they should use Bomby. Everyone else on the team is expecting this to end with him blowing up, but he says that Bomby should be used to throw balls into the basket, which he does.

In "Enter the Exit", Bomby first appears arguing with Dora due to the contestants wanting to revive Four after learning that X cannot recover contestants. He later appears when Naily is revived by Four, whereupon he hugs her, repeating his first line in BFB: "Oh my gosh, Naily!"

In "Get to the Top in 500 Steps", Bomby was chosen off-screen as the participant in the challenge by his team to climb the stairs and press the button. Bomby was directly in front of Tennis Ball for most of the challenge. When he was pushed off by Flower, Black Hole used his gravity to sling Bomby back up, preventing Bomby's death but sucking up his banana in the process. Bomby was once again saved in the same fashion when Dora knocked him off. Bomby placed 5th for Team Ice Cube!, securing their victory.

In "What Do You Think of Roleplay?", Bomby gets angry at Black Hole because he sucked his banana up last episode, and demands for another banana. Black Hole protests, saying that he doesn't owe him anything because he saved his life, but Bomby says that "life is cheap" and continues to demand for the banana until Black Hole agrees to find him one. During the last moments of the challenge, the other members of Team Ice Cube suspect that Bomby is the impostor, although Donut doesn't seem to want to believe it. However, before they can decide, iance finds their impostor so Bomby and his team are up for elimination.

In "Return of the Rocket Ship", Bomby receives 2791 votes in Team Ice Cube's second Cake at Stake. Bomby appears to have a new banana that Black Hole gave him prior to the events of the episode's elimination, only for it to, again, be warped by Black Hole after he gets "souped" by Four, making him shriek in indignation. Bomby, along with the rest of Team Ice Cube, follows Gelatin into the hole dug by Lightning after Fanny says the emeralds are down that hole.

In "Don't Dig Straight Down" Bomby and his teammates find a Buried Forest, Deciduously Insulated. He rolls down the entrance and starts playing with his teammates. After Barf Bag gets punctured, Bomby fills her up with the water, making her conscious again. When Team Ice Cube is surrounded by lava, Bomby sacrifices himself by igniting his fuse and propelling his team members to the surface. He remains dead for the rest of the episode.

In "The Escape From Four", Bomby gets recovered. During his recovery, his team gets called for Cake at Stake. Bomby is the second safe with 2,592 votes, and is seen catching his speck of dust. Later in the episode, he is seen attempting to free the eliminated contestants by pulling Spongy out of Four. When Two appears and proposes his new show, Bomby is hesitant at first to join. When Two turns the sun into a spiky ball and repeatedly stabs Four with it, Bomby decides to switch over and become a participant on TPOT.

In "X Marks the Spot", Bomby is in the crowd of characters who gasp when X is lassoed away by the Four Colored Team. 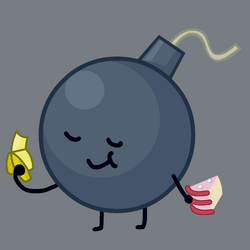