This article lists the interactions between Book, Lollipop, and Taco.

Despite Taco trying her best to help her team, Book and Lollipop both believe she abandoned her team after getting trapped in a jawbreaker in "Lick Your Way to Freedom", and they had a resentment towards her for a while. As of "The Four is Lava", they are on better terms with Taco.

In "Yeah, Who? I Wanna Know", Book complains about not making it into BFDIA. Lollipop suggests that the voters must have judged her by her cover, which makes Book angry.

In "Why Would You Do This on a Swingset", Taco is still stuck in a jawbreaker from the episode prior. She overhears Book talking about her possibly abandoning the team after chasing the basket too slow. She also overhears Lollipop writing eulogies for her. At the end of the episode, Book and Lollipop, along with some other teammates, scold Taco for not helping during the challenge.

In "Today's Very Special Episode", Book says Taco wouldn't need to be killed to be deceased in her eyes, Lollipop agrees. This makes Taco yell, "What the heck, was it really that bad!?"

In "Four Goes Too Far", while latching onto Golf Ball's rocket, Taco jumps back down to Earth to find a way to get rid of the Twinkle. Book and Lollipop both angrily groan after seeing that Taco left them again.

In "Get to the Top in 500 Steps", Book talks to Lollipop about who obviously won't be running up the stairs for their team. Lollipop acts as though Book is referring to her, so Book clarifies that she was talking about Taco. Lollipop then suggests that Book actually try speaking to Taco then. Book angrily ask where her attitude is coming from, but Gaty breaks them up before their argument escalates.

In "What Do You Think of Roleplay?", Book can be seen angrily eyeing "Taco" just before the contest starts. Lollipop, no longer annoyed at Taco and realizing she abandoned her team for good reason, asks Taco for a strategy to find out who the impostor may be. Book gets mad at Lollipop and questions why they should listen to Taco. Lollipop explains what happened about Taco leaving the team in BFB 6, but Book still doesn't believe it, and asks how she knows Taco won't abandon the team again. Later in the episode, Book assumes Lollipop's the fake for "acting so out of character", but she guesses wrong. After being called safe, Book realizes Taco outside of her team's now non-existent room, claiming she was right about Taco abandoning them and spazzes out from pure anger. Taco just looks down upset over the accusation.

In "Return of the Rocket Ship", Lollipop becomes more uncaring of Book's animosity towards Taco. During the challenge, while Book still rambles about her obsession about trying to prove that Taco is a traitor, Lollipop says "Looks like it's time to get this book's cover... judged!"

Book spends the entire episode spying on Taco, saying that Taco isn't helping by just sitting by herself trying to ignore everyone, and claiming Taco abandoned their team.

Taco states that Lollipop is a mutual friend who she doesn't even like that much at the moment. She then spends the rest of the episode sitting by herself, ignoring her team.

In "Don't Dig Straight Down", prior to the lava reaching the surface, Taco is still sitting by herself, ignoring Book and the rest of her team.

In "The Four is Lava", Lollipop shows disgust when Gaty points out that Book is dead. When Book says that she hopes Lollipop is safe, Lollipop responds with an uninterested "mmhm".

In "Getting Teardrop to Talk", when Book complains over Ice Cube and Teardrop dying in their chase for the basket, Taco keeps telling her to keep running. When Taco hears that Book exploded into flames, she responds, saying "Got it".

In "Enter the Exit", Lollipop watches Bell yell at Taco because she used her to get the Twinkle off the Moon.

In "A Taste of Space", Lollipop acknowledges how Taco is correct about her team having an advantage in the challenge, since they are in space.

In "Let's Raid The Warehouse", Lollipop tells Taco to reassess Woody's value to the team after he destroys the Have Nots' gift, costing them the challenge.

In "Chapter Complete", Taco gasped when Lollipop voted for Flower to win instead of Gelatin.

In "Why Would You Do This on a Swingset", Book and Lollipop are both sad about Taco's "death". Lollipop even writes eulogies dedicated to Taco, calling her "amalgamated and weird" which makes Taco angry and "bold and courageous" which makes Taco act prideful.

When Book realizes that Taco was recovered at the same time both she and Ice Cube were, that would mean she's still alive. Taco gets happy when Book figures this out. Book then ultimately comes to the conclusion that Taco abandoned them and seems to be genuinely sad about it. Taco becomes sad as well and desperately tries to tell Book she's right there with them.

In "Four Goes Too Far", Book, Saw, and Lollipop had a friendly conversation about space.

In "Get to the Top in 500 Steps", "What Do You Think of Roleplay?" and "Return of the Rocket Ship", Lollipop stands up for Taco whenever Book tries to put her down.

In "Get to the Top in 500 Steps", Book attempts to get Lollipop to agree with her about Taco not participating for the challenge. In "Return of the Rocket Ship", despite Book and Lollipop arguing in the episode prior, Book tries to show off to Lollipop at the fact that Taco is avoiding her.

In "Don't Dig Straight Down", Book attempts to apologize for her cruelty to Taco but turns around not knowing what to say, but Pin recommends that she instead try to help Taco feel happy overall instead of happy with her. Book realizes that her team wants freedom. In an attempt to make it up to Taco, she sacrifices herself to save Taco and Ice Cube from the lava flow. Taco appears confused by this.

In "The Four is Lava", Taco is unsure about what to think about Book saving her life when she had been cruel to her earlier. However, that heroic act also gave Taco a rekindled faith in Book which caused her to be the first of her team to request Four to revive her former nemesis, much to Lollipop’s shock. When

is reunited for the elimination ceremony, Lollipop compliments Taco's fish with a smile on her face, suggesting that despite her attitude, Lollipop is happy to see Taco again. Taco is about to talk to the newly-revived Book until Four interrupts her to start the elimination ceremony. Later, Book tells Lollipop that she hopes for her to be safe. Taco tries to talk to Book again, only for Four to once again interrupt due to Death P.A.C.T. messing with him.

In "The Escape from Four", Taco is interested with the BFB, and Book can tell that she wants it. Taco admits she does, but is concerned about abandoning her team again, but Book warmly accepts her choice and says she won't force her to stay, to her joy. As she leaves to join Four's show, Book tells Taco that she can tell her team all about her experiences when she returns. 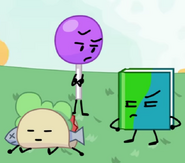 Book saving Taco (as well as Ice Cube) from lava

Taco asking Four to bring back Book, while the rest of her team (except for Ice Cube) looks on in disbelief

Book no longer cares about Taco's abandonment and accepts her choices.

"You can tell us all about it when the game's back together!"

Taco gasped when Lollipop voted for Flower instead of Gelatin
Relationships
Community content is available under CC-BY-SA unless otherwise noted.
Advertisement