This article lists the interactions between Book, Match, and Pencil.

In BFDIA, Book was initially eager to join Pencil and Match's alliance, even if it meant reluctantly settling as an alternate. She would more often than not act as a voice of reason when put up with Pencil and Match's irrational decisions, while still enjoying herself overall. However by BFB, Book gains some one-sided disdain for the duo and FreeSmart in general, cutting ties with them with Ice Cube.

In "Get in the Van", Book declines Pin's offer to swing with her to get to Match's dance party. When Book says that their new team should be named "Freedom", she puts her arm around Match. Match just looks back at her nervously. Later, Book slaps Match because they passed a library, because of the rules. Match can slap her if they pass a matchstick factory.

In "BFDIA 5b", Book and Match exchange a friendly greeting and then progress through several stages together, including ones where they must die for each other. Later, Waffle introduces Book to Tune. Match interrupts Waffle, and Book tells her to be nice.

In "No More Snow!", Book excitedly shouts Match's name upon her and Ice Cube's return. Book is shocked and then sad when Match puts out her fire using Ice Cube. Match explains that the explosion from the beginning of the episode was only enough to set her on fire but not enough to kill her.

n "It's a Monster", Match invites Book and Ruby to break time. When Book compliments the lights in the new vehicle, Pencil corrects Book when she accidentally calls the FreeSmart Supervan a van.

In "The Long-lost Yoyle City", Match slaps Book because they passed a matchstick factory. Shortly afterwards, Match tells Book not to worry when she says that abandoned cities give her the creeps.

In "Welcome Back", in response to Pencil falling and Bubble popping, Book says "Oh great, not again." Book then tells Ruby and Ice Cube to sprint down the Yoyle Needy to catch Pencil. When Book catches Pencil, she tells her "You're safe and sound with me, Pencil! But don't act so rowdy anymore." Pencil angrily states that her fall was Ruby's fault. After Ice Cube saves Woody, Pencil tells Book that they now have to recover Bubble and Ice Cube now. Book reminds Pencil that they also have to recover Ruby.

In the previously mentioned scene, Book has a couple subtle facial expressions towards Pencil's actions. Showing an unamused/annoyed expression when Pencil immediately blames Ruby for her falling from the tower and when she doesn't seem to care at all about Ice Cube's sacrifice and just that they have more people to recover.

Later, Book talks with Pencil about bringing Match back from the TLC. To Book's surprise, Pencil doesn't seem to really care about the topic. Book explains that she was under the impression they were best friends and that Pencil be more eager to see Match. Pencil replies that they're doing fine without her and that Match was to needy anyway. They finally reach the HPRC and recover their dead alliance members.

In "Enter the Exit", Pencil doodled most of her alliance members on her desk, with Book being one of them.

In "Yeah, Who? I Wanna Know", Pencil accidentally sets Book on fire with her breath.

In "Get Digging", Pencil warns her teammates, one of which is Book, to watch out for wild Leafy.

In "Insectophobe's Nightmare 3", Book and Ice Cube ask Pencil if they can be in her alliance. Pencil nervously tells them they can be alternates, which Book reluctantly and angrily agrees to.

In "No More Snow!", Match and Pencil laugh at Book when she considers rescuing Golf Ball, Tennis Ball, and Rocky from Evil Leafy. Match tells Book to shush after she asks her if she wants to win and Book replied yes. When Pencil chastises Ruby on if she ever went to Gem School, Book tells her that Gem School is only for diamonds. At the ending, Book is saddened when Match uses Ice Cube to put out a fire.

In "It's a Monster", when Book thinks Nickel might be right about their break time being too long, Match tells her "No, Book, no" and that it'll be over when it's time. Which is almost right after she said so. When Match's second break time starts almost immediately, Book lets out a unique sigh that could mean second-hand embarrassment, frustration in her inability to speak up, or something else entirely.

Book and Pencil have a conversation about the LPRC, in which Pencil tells her that she'd be very sorry if she used her hands on it. Book does it anyway, causing Pencil to yell at her, asking why she touched it. Book responds that she didn't trust Pencil's words because she thought Pencil was just trying to scare her.

In "The Long-lost Yoyle City", Book recommends that they do the kill recover trick on Pencil when a Fish Monster catches her with its tongue. Later, when Pencil kills Rocky for barfing on her, Book mentions how that happened two years ago, and Pencil tells her to stop talking and start climbing.

In "Getting Teardrop to Talk", Pencil tries to get Book to help them find who popped Bubble but Book says she's good. Pencil then threatens to expel her from the alliance but Book reminds her that she's just an alternate, and Pencil gives an angry grunt in response. When Pencil asks who their two other members should be, Book and Ice Cube cut ties with FreeSmart, feeling it's too unhealthy for them, and join Gaty's team, which makes Pencil and Match scream.

In "Get in the Van", when Book and Ice Cube arrive at the party at the The Clubhouse of Awesomeness on the Eiffel Tower, Pencil steps in and comments how those "monstrosities" are not allowed in because they're only alternates. Match says that Pencil is right and kicks them both out. Later, Pencil yells at Book and Ruby for having a snowball fight inside the van.

In "Return of the Rocket Ship", Book confesses that she and Ice Cube left FreeSmart due to being mocked and neglected by them.

In "Don't Dig Straight Down", Book tells Pin that she doesn't want to associate with Match or FreeSmart ever again, with flashbacks referring to Match calling for break time in BFDIA 5d and Match kicking her and Ice Cube out of the Eiffel Tower in 5a. 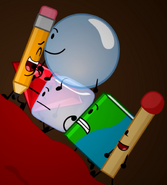 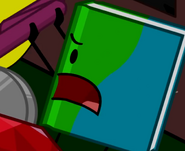 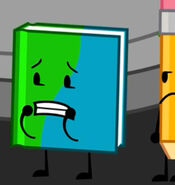