Abject Studios
Boom Mic is a recommended character and was up for voting in "You Know Those Buttons Don't Do Anything, Right?" to join Battle for Dream Island: The Power of Two. They were recommended by Abject Studios and first appeared in "Today's Very Special Episode". A common running gag in their debuting appearances is that they'd accidentally hit their head on something.

Boom Mic appears to be nervous and quite jittery, as they show a nervous expression when Two calls them out. They are also shown to be a bit clumsy as seen in their audition and when they hit their head on their way down when eliminated from the debut.

Boom Mic's limbs are placed on the black colored base of their grey boom. Their microphone has grey fur wind muff. Their face is further away, on the microphone; attached by a black mount.

In "Today's Very Special Episode", Boom Mic is in the crowd that boos Pen's drawing.

In "The Escape from Four", Boom Mic was one of the 26 recommended characters selected by Two to become a contestant in The Power of Two. In their audition, Boom Mic walks happily until painfully bumping into a wall.

In "You Know Those Buttons Don't Do Anything, Right?", Boom Mic is seen with their fellow eligible debuters on the ground when Two flies up to the top of the Hotel. Due to being high up, the contestants cannot hear Two's calls to do Cake at Stake. After Nickel fails to hear their calls, Two uses their telekinesis to bring the contestants and the eligible debuters up.

Boom Mic, Conch Shell, and Clapboard are all called out at once, as they failed to get enough votes to join. Two claps them through the floor, with Boom Mic hitting their head on the way down. Later, Boom Mic can be seen inside the hotel as Two and the contestants use the elevator. 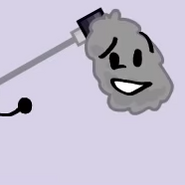 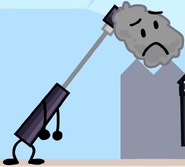 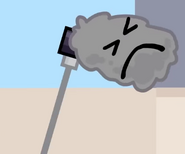 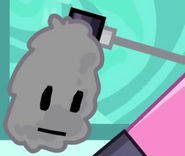 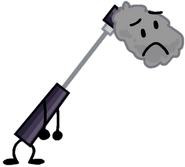