View source
watch 01:41
Who is Bottle?
Do you like this video?
Play Sound

This character has transparency in her design.

Bottle is a female contestant on Battle for BFDI and The Power of Two. She was one of the former recommended characters who were eligible to compete in BFDIA; however, she only received 29 votes, coming in 58th place, above Bracelety, who was the lowest with 18 votes to join. She didn't receive anywhere near enough votes to join the game, so she was flung to the Locker of Losers with the Sender Scoop Thrower, along with the other contestants who didn't make it.

Bottle's IDFB redesign features a more glassy, wide look on her, as well as being transparent. Her asset is no longer badly drawn.

Bottle had a chance to rejoin IDFB along with the other TLC prisoners. She only got 30 votes, the least out of everyone else.[1]

Bottle finally became a contestant in BFB and competed on the team Death P.A.C.T., but later quit to compete in TPOT.

In TPOT, she competes on the team The S!.

Bottle appears to be a glass bottle. Bottle's main body is clear, while her shine is white. Her outline is a bluish gray.

Bottle's demeanor is optimistic and her actions border on being oblivious. She tends to agree with the people around her and can get easily distracted, such as when she forgot about Loser's lie in favor of Donut's first time hosting Cake at Stake. She also acts nicely to those around her, hoping to prevent death whenever possible, and even when someone does die, she stays positive. Bottle is naturally very bubbly in nature and almost always is happy. Despite this, she's not very bright at times, and she just follows what other people do instead of making her own decisions.

Despite her oblivious personality, she does takes things seriously when situations go haywire, such as when she was blocking the forks and was afraid Four would kill her team if they fail, or when she thought Loser was trying to gain something by being nice after it was revealed he lied.

Bottle is an agreeable person. She speaks loudly and likes to copy what others are doing. Bottle is very ticklish and loves to eat cake. Bottle doesn't mind having things rattle around inside her.

Bottle is an optimistic bottle who can only be shattered by the power of "bottle flipping".

Did You Know?: Bottle misheard the name of Battle for Dream Island, and was confused why she wasn't given Dream Island.

In "Don't Lose Your Marbles", she, along with American Flag and Scissors, can be seen frowning after seeing Firey, Ice Cube, and Blocky all die in front of her.

In "Vomitaco", Bottle is in the large crowd watching the Cake at Stake.

In "Bowling, Now with Explosions!", Bottley appears in a crowd of recommended characters who are watching the Cake at Stake. They are all sealed in a metal box by the Announcer, which randomly sets on fire in the stinger.

In "Rescission", Bottle, along with many recommended characters, is zapped by a laser by Pencil.

In "Gardening Hero", Bottle is in a group of gasping recommending characters.

In "Return of the Hang Glider", Bottle watches the final Cake at Stake from the bleachers with the other recommended characters.

Bottle is given a chance to join BFDIA. However, she only obtains 29 votes, which is not enough. The only person she outranks is Bracelety, who received 18 votes.

In "Welcome Back", Bottle does not make a physical appearance, but she appears on the voting card as a character able to be voted for to join.

In "Getting Teardrop to Talk", she is first seen having a conversation with Donut. She commends Gelatin's large stack of forks, which would be toppled by Bell. Later, Bottle joins Death P.A.C.T. because she heard Liy and Pie were against killing. Bottle announces that her team is about preventing death and creating trust, naming her team: Death P.A.C.T.

In "Lick Your Way to Freedom", she inspects a Jawbreaker which she perceives as empty, but Pen pulls out Foldy shortly afterward. Bottle announces that Foldy is inside the jawbreaker.

In "Why Would You Do This on a Swingset", she is seen next to Pie, wanting to prevent death. However, a fork hits Pie's head, exploding her, and one hits Pen, causing him to get pushed into Black Hole and subsequently sucked up. After both deaths, Bottle announces that they are dead. Bottle is later seen on her team's swingset.

In "Today's Very Special Episode", Bottle is first seen eating the cake that was supposed to go to Donut. During the challenge, she can be seen with Remote when Pen tries to ask Black Hole to do the challenge. She later helps Death P.A.C.T. protect Four from the barrage of forks, expressing fear over how Four will zap them if any forks hit him.

Bottle, Tree, Pen, and Remote are tasked by Pillow to get to Black Hole while she blocks the forks herself. They successfully get Black Hole to suck up the forks. Liy tells Bottle to climb Bell's string, and she catches Pen's make-over drawing of Four inside herself. The drawing however, causes them to lose the challenge.

In "Fortunate Ben", Bottle's team faces elimination. Bottle says that as long as elimination doesn't mean dying then they are still successfully preventing death. Bubble then pops off-screen and Bottle states that she is dead. She is safe with 2,261 votes, the third most. Her cake flies into her hole, tickling her and meaning that the fortune cookie is now stuck in her for the next few episodes.

In "The Liar Ball You Don't Want", before The Losers!' Cake at Stake, Bottle forgets Loser's lie in favor of Donut's first Cake at Stake. After Loser's elimination, Bottle says that "Loser was trying to gain something", but Snowball says that Loser lied once - earlier in the episode. During the challenge, Bottle fights over the Liar Ball with Needle. Tree somehow ends up inside her.

In "This Episode Is About Basketball", Bottle giggles while telling Tree (who is still stuck inside of her) to "quit moving around" as he tries to aim a ball at the basket.

In "Enter The Exit", Tree is still stuck in Bottle. When everyone is trying to bring back Four, Bottle calls out "Fore!" and smacks Golf Ball with a golf club. Golf Ball hits Cloudy's window, shattering it, and he yells "HEY!"

In "Get to the Top in 500 Steps", Bottle is seen with her team when Black Hole saves Bomby. Tree tells her to bring him to Four, who she has a friendly conversation with until Tree asks Four to recover Pie, which he does. Tree also appears to be halfway out of Bottle.

In "What Do You Think of Roleplay?", Bottle appears when Taco (as Tree) thinks about what to do. "Tree" smashes Bottle to get free. After Bottle's death, Pillow takes the fortune cookie for herself.

In "Return of the Rocket Ship", Bottle is recovered, free of her fortune cookie and Tree. Her team has no idea where the emeralds are, and Bottle claims that she heard rumors that they are lodged between the spikes of Evil Canyon and suggests going there. Before they can continue, Black Hole stops them in their tracks and reminds them that the spikes would kill them and of Pillow's recent death. Bottle flutters her arms in response (she did this because everyone else is doing it), disappointing Black Hole. She later goes into Four's mouth with the team to find Pillow.

In "Don't Dig Straight Down", Bottle reaches her arms out of Four's mouth for the emerald A Better Name Than That found.

In "The Four is Lava", Bottle, along with Pen and Remote, continuously stick their hands out of Four's mouth (with the help of Black Hole to get back up every time they fall off). Doing this too many times makes Four push Bottle, Pen, and Remote off a tree and throw her team out of his mouth, which makes Bottle's team declared safe.

In "The Escape from Four", Bottle can be seen walking alongside all the contestants outside EXIT to see Four struggle with something. She says that Spongy is the largest contestant to be eliminated by seven times, and Pie agrees. Bottle then helps with pulling the eliminated contestants free. When Two arrives, Bottle tells Golf Ball she's sure Two is completely safe. When Two is doing tricks with lava, a drop falls inside of Bottle, at first she says it tickles, but she eventually screams in pain and shatters. When Four recovers her, Four asks her if she'll stay with him, but Bottle ditches him to join The Power of Two.

In "X Marks the Spot", Bottle cheers when X is dropped into 'glue' so that he could continue as the host.

In "You Know Those Buttons Don't Do Anything, Right?", Bottle initially stays on Death P.A.C.T. However, upon hearing that Yellow Face's team is fun, she asks Pie if they're here to have fun. When Pie's response is that they're preventing death, Bottle leaves to join the The S!. When no one can hear Two on the top of the building talk about the last rule, she just assumes they said "go", before being knocked over by everyone else running. Bottle is thrown by Winner onto the building but she shatters and dies. Clock talks Two into counting her body and her team is safe after Winner climbs to the top.

In "The Worst Day of Black Hole's Life", Bottle is recovered by Tree. For the challenge, Bottle helps by bouncing on Yellow Face in order to place more blocks on their stack. At one point, Bell swings into The S' stack, causing Bottle to fall and shatter. Winner recovers Bottle and asks her what Eggy's problem is. Bottle says that they should ask Clock. Bottle's team ends up being safe with eight blocks stacked. 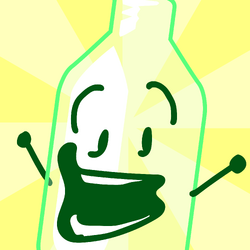