Battle for Dream Island Wiki
Register
Don't have an account?
Sign In
Advertisement
in: Items, Running gags, Commercials,
and 3 more

Paper Slips are magical pieces of paper in the world of BFDI that turn into dollar bills when a number gets written on them. They were in a commercial in "Crybaby!" and they have been used several times by Pen and Leafy, the latter of which used them to buy Season 1's prize, Dream Island.

It is used like a dollar bill, except the slips start off blank. When a number is written on it, the paper slip magically turns into a dollar bill with the worth of that number.

This person bought the world!!!!

BoPS appeared in "Return of the Hang Glider" 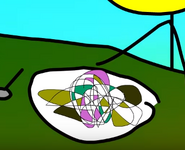 The Box of Paper Slips on a plate

BoPS In Lo-Fi Beats to Yoyle To

BoPS appeared in "SOS (Save Our Show)"