Battle for Dream Island Wiki
Register
Don't have an account?
Sign In
Advertisement
in: Articles with broken or dead links, Recommended Characters, Characters,
and 10 more
English

View source
watch 01:30
Who is Bracelety?
Do you like this video?
Play Sound

This article is about the character nicknamed "Ringy". For the recurring recommended character, see Ringy.

Bracelety is a female contestant in Battle for BFDI and a former recommended character who made her debut in "Reveal Novum". She was a member of Team Ice Cube! before being eliminated in "Today's Very Special Episode". She also appears in The Power of Two.

Bracelety could have joined BFDIA in "Yeah, Who? I Wanna Know", but she placed last, only receiving 18 votes, the lowest out of all of the other eligible BFDIA contestants, making her unable to join, and was flung with the Sender Scoop Thrower to the Locker of Losers along with all of the other characters who failed to join BFDIA.

Bracelety, along with the other TLC prisoners, had a chance to rejoin in "Welcome Back" until it was revealed that it was replaced by BFB. Despite the indefinite delay of IDFB 2, she got 32 votes.[2]

She briefly competed in Battle for BFDI as a member of Team Ice Cube!, but was eliminated four episodes in on "Today's Very Special Episode" with 9,168 votes. She placed 64th (second-to-last) overall.

Bracelety appears to be a silicone bracelet. Her body is sky blue, and her shading is celeste.

Bracelety is seen as a loud, hyperactive character who extremely idolizes Ice Cube. Bracelety tries to find anything optimistic about her idol, and will cheer her on when she's doing basically anything. She is also sensitive to those who speak against her idol, such as how Fries called her a rascal and denounced her follower status. She also has a keen obsession with signs and is seen most of the time holding one up.

Bracelety is a silicone bracelet; a loud, hyperactive girl who loves -- and we mean loves -- Ice Cube. Bracelety uses her ability to create signs to encourage Ice Cube and to let her know that she is a special chunk of frozen H2O.

Bracelety loves Ice Cube so much that she'll battle anyone who doesn't share her enthusiasm. To this day, Ice Cube has not acknowledged Bracelety once.

Before Bracelety's debut in "Reveal Novum", there was a similar looking character called Bracelet in "Half a Loaf Is Better Than None". She jumped into a 10-foot deep vat of hydrochloric acid in an attempt to retrieve Announcer's marble collection with Bally and Marble in it as a chance to obtain 15 bonus points.

In "Rescission", Bracelety appeared with what appeared to be red shoes, was killed by the Emergency Button and Pencil when she pressed its button.

In "Gardening Hero", Bracelety was seen holding a sign saying "GO Ice Cube FTW!!!" as part of the second crowd of gaspers when the found out about a previously eliminated contestant will be rejoining Battle for Dream Island.

In "The Glistening", Bracelety was one of the recommended characters in the line to vote for Ice Cube to be eliminated. This time, Bracelety held a sign saying "GO ICE CUBE TO THE TLC".

In "Hurtful!", Bracelety was seen once again, holding a saying "Now that Icy's gone, who do I root for?" Implying that Bracelety was wanting Ice Cube to win BFDI.

Bracelety was once seen again in "Insectophobe's Nightmare 2" with a similar look as she had in Hurtful!, but with thicker lines and being slightly touched-up, along with her right eye being elongated. Bracelety, along with the other recommended characters were later eaten by the Announcer's bugs which were then destroyed by him.

In "Return of the Hang Glider", Bracelety along with their other variants were seen in the crowd watching the final Cake at Stake.

In "Yeah, Who? I Wanna Know", Bracelety received 18 votes to compete in BFDIA, which was the lowest out of everyone else. She was seen in the background while Book and Lollipop were arguing about Book's initial disqualification. Bracelety, along with the other non-joining characters were flung to the Tiny Loser Chamber.

In "Welcome Back", Bracelety makes a cameo in the Tiny Loser Chamber when Coiny mentions that he would like Snowball to get out of the LOL. In this scene, a very small part of her is seen between Eggy, Taco, and Dora. In IDFB, she received a new look. Bracelety is later put up for voting to join the show.

In "Getting Teardrop to Talk", Bracelety made her first speaking role in an episode. She was seen when Ice Cube and Liy were playing around with Teardrop's vocal cords. In the scene, she is seen holding a sign and rooting for Ice Cube. Clock says that she is bad for supporting Teardrop's torture. Fanny inserts herself into the conversation, and says that everyone is hateable, but Bracelety remarks that Ice Cube shouldn't be hated. Fanny says that she can be, and everyone is hateable in her own, including herself. Bracelety says that Fanny's line made her open her eyes. Later, when Teardrop bites Ice Cube's legs and screams, Bracelety says that she is cheering.

After Ice Cube is part of the truce with Liy and Clock, Fries says that he's surprised that Ice Cube is good at negotiation. Bracelety cheers for Ice Cube and says her "fan club" is growing. Fries denies this, and calls Bracelety "Ringy", and says that followers never win. Bracelety says that she hates Fries.

Later, Four prompts the to-be Battle for BFDI contestants if they want to play a game. Bracelety is seen away from the crowd of to-be contestants, and holding a sign saying "GAMES" with hearts (♡) around it, and says that she loves games.

When teams are being arranged, she saw Bleh, which in that team, Ice Cube (Bracelety's idol) is a member. Bracelety pleads that she wants Ice Cube to be on her team to "make her dream come true", but Lollipop says that her team already has 8 members. Bracelety becomes incapacitated in dismay and Firey Jr. tells Bomby to grab her to his team. While Team Ice Cube! comes up with a name, Bracelety is seen in the background shouting and holding a sign. Later, the camera focuses on Bracelety as she shouts "TEAM ICE CUBE ALL THE WAY! YAY!", naming her team "Team Ice Cube!". She was later seen during the challenge, helping Barf Bag carry Spongy. Her team is safe.

In "Lick Your Way to Freedom", Bracelety licks a jawbreaker with the intent of freeing Ice Cube, despite the fact that she was already freed by iance earlier. When it was revealed that Teardrop was inside, she got excited, but then was disappointed afterward, because it wasn't Ice Cube. Bracelety is later seen as Barf Bag notices that she's sad again. Firey Jr. said that she would get over it.

In "Why Would You Do This on a Swingset", her only appearance is on her team's swingset. During Donut's motivational speech, the camera is focused on Bracelety when Donut mentions he sees hope in his team. Once

finishes the challenge before Team Ice Cube!, Bracelety is seen watching in dismay due to the accidental destruction of her swing by Bomby. Bracelety does not speak this entire episode.

In "Today's Very Special Episode", she is seen as one of the many objects climbing Bell's string. Among them is her teammates but Donut. When Gelatin thinks Donut is a party pooper, she high-fives Gelatin in agreement, and falls, landing on Four's mouth. She is screeched along with X. She is eliminated with 9,168 votes and is sent to the EXIT through Four's mouth, not that she minds since Ice Cube's chances of winning increased with herself leaving. Gaty, looking over, says that Bracelety "went out strong", and she and Pillow both say Bracelety didn't care what people thought of her. Meanwhile, Ice Cube's mouth twitches downward a little bit, implying some sadness for Bracelety's elimination.

After she was eliminated, she made a cameo as a drawing in her belongings that the rest of Team Ice Cube! used to make Four's makeover in "Today's Very Special Episode".

In "Fortunate Ben", the Death P.A.C.T. contestants (except Pie) are given fortune cookies that are filled with notes from Bracelety, which were revealed to have been thrown away in the dumpster by Gelatin when Four found them.

Bracelety reappears in "Enter the Exit" as a student of the EXIT. She writes "ICE CUBE" on her worksheet to answer each question. Upon completion, she yells "FREE TIME!", something her classmate Pencil misinterprets as a free time for the four students. Liy corrects her, as the free time was only for Bracelety and not for the other three.

Bracelety is shocked when she hears that Loser was eliminated. However, after 8-Ball tells Bracelety her idol hates Loser too, she reconsiders. She is seen happy when Four announces that one of the EXITors will rejoin. Her rejoin audition is telling the audience if they vote for her, she'll make sure

In "Get to the Top in 500 Steps", she receives 2,559 votes, not enough to rejoin. When she asks Four to give her a drawing of Ice Cube to her, he refuses. When she asks Leafy to get said drawing to Ice Cube, Leafy uses it as a tissue instead, shocking Bracelety. With Leafy's exit, Bracelety drops a rank below, being the second-lowest (so far; this could change in the future).

Bracelety was mentioned inside Book's dictionary section in "Return of the Rocket Ship".

In "The Four is Lava", a trail of signs with Ice Cube's name on them can be seen leading from The Fourest to the EXIT.

In "The Escape From Four", Bracelety was first seen writing yet another sign with Ice Cube's name, not minding about what the others are doing. After Loser breaks out of his jawbreaker, she says she's happy he got eliminated cause now they get to be buddies. She gets offended when Liy says she doesn't want to be together in the EXIT, but is on board with her when she clarifies they should be together outside. As she sees Loser piling up the things in the Exit, she gets excited about seeing the outside world and Ice Cube, and starts hyperventilating. Prompting Match to call her "Brac-e-letto" and requests her to calm down. But Bracelety defends herself by saying if Match escapes, she gets to 'check out Flower's new fashion line', "Super-Slip Shoes so Blah". This made the both of them hyperventilate at once.

After learning that Spongy's holes are stretchy enough to fit all of them, Bracelety quickly jumps inside, being the first one aside Loser to get in. She struggles to get out because of the limited space of one area, but still manages to pop out of Spongy. When Four learned that the EXITors have escaped, he pulls all of them back inside. Bracelety screams for help to Ice Cube, but she isn't able to do anything and backs away.

In "Chapter Complete", Bracelety and Pencil appear as the finalists in Four's show. Bracelety comments that Four is better than Ice Cube would be as host. After hearing a voice asking when Four will come back, Bracelety yells for Four to come back to them. Later, another voice can be heard telling Four to wake up. Bracelety says they don't need them and that he can stay with them forever since they all like him. Four eventually snaps Bracelety and the other imaginary contestants out of existence after receiving too much criticism from them.

In "You Know Those Buttons Don't Do Anything, Right?", Bracelety appears briefly in the stinger, watching Liy and Stapy with the other EXITors. 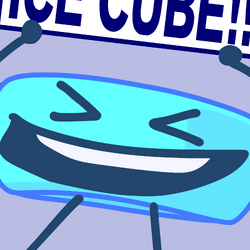