Idol, on Bracelety's side
This page lists the relationships between Bracelety and Ice Cube. Ice Cube is Bracelety's idol, but Ice Cube rarely notices her. They interact more in BFB, as in BFDI, all Bracelety did was cheer for Ice Cube by holding up signs.

In "Gardening Hero", Bracelety holds a sign saying "GO ICE CUBE FTW!!!" when she was in the group of gaspers.

In "Hurtful!" and "Insectophobe's Nightmare 2" Bracelety holds a sign saying "Now that Icy's gone, who do I root for?"

In "Getting Teardrop to Talk", after Liy says that she can almost hear Teardrop's voice, Bracelety is seen, cheering and saying that Ice Cube can get Teardrop to talk. When Fanny appears, Bracelety states that Ice Cube isn't worthy of hate. When Ice Cube screams after getting her feet bit by Teardrop, Bracelety believes she's cheering and encourages to be louder. Bracelety is ecstatic when Fries gives Ice Cube a small compliment, thinking Ice Cube's fan club is growing. When Fries says he's not a fan of her, Bracelety asks how that could be possible, and calls Ice Cube awesome. She is saddened when she learns she can't join Ice Cube's team so she instead names her team Team Ice Cube!. Ice Cube also frowns when Bracelety tries to join her team, possibly because she felt bad that she couldn't join.

In "Lick Your Way to Freedom", Bracelety was anticipating that Ice Cube would be in her teams jawbreaker and was disappointed to see that it was Teardrop.

In "Today's Very Special Episode", Bracelety wants Ice Cube to be safe even though she wasn't up for voting. When it's revealed that she's eliminated, she's happy cause it means that Ice Cube's chances of winning have increased and continues to cheer for her as she's being sucked away by Four. Ice Cube, for a split second, frowns at Bracelety's elimination, showing she liked her back.

In "Enter the Exit", all Bracelety appears to write on her assignments is Ice Cube's name.

In "Get to the Top in 500 Steps", she asks if Four and Leafy can give a card she made to Ice Cube and is distraught when the latter balls up her card thinking it was a tissue and throws it away.

In "The Escape from Four", Bracelety can be seen writing another Ice Cube sign at the beginning of the episode. Bracelety gets so excited at the thought of escaping EXIT and seeing Ice Cube that she hyperventilates. When Bracelety is trying to escape the EXIT, she tries to get Ice Cube to save her.

In "The Escape from Four", Bracelety calls out to Ice Cube to save her as she gets sucked up by Four. Ice Cube is shown nervously backing away after she's gone, either from feeling bad for Bracelety or cause she wouldn't have been able to do anything.

In "The Glistening", Bracelety voted Ice Cube to the Tiny Loser Chamber while holding a sign saying "GO ICE CUBE TO THE TLC". 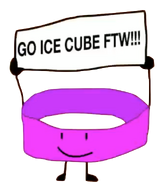 Go Ice Cube to the TLC. 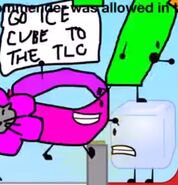 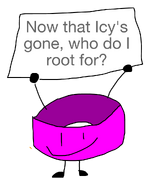 Now that Icy's gone, who do I root for? 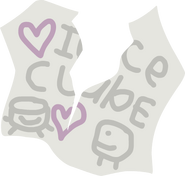