This article lists the interactions between Bubble and Match.

In "Take the Plunge: Part 1", Match yells at Ice Cube to stop squeezing Bubble before she pops. During the challenge, Bubble says that they, along with Pencil, should form an alliance. Match says that it would be no harm.

In "Take the Plunge: Part 2", when the boat is completed, Bubble remarks to Match that it's "pretty boxy, but okay!!"

In "Barriers and Pitfalls", they both wait for Pencil before they start the race. When Match complains that Pencil is taking a long time, Bubble tells her to be patient, since it's only been five minutes or so.

In "Sweet Tooth", when Bubble is preparing to present her cake to the Announcer, Match tells her "Good luck, not-dumb friend!" When Bubble scores lower than Coiny's dirt cake, Match consoles her by saying that Bubble bakes at a sub-dirt level.

In "Bridge Crossing", when Pencil and Bubble fall into the gorge, Match jumps in because they "have to stick together".

In "Power of Three", Match and Bubble are placed on the same team with Pencil and place 3rd.

In "Cycle of Life", Match expresses elation over "only" having to carry Bubble. However, when it actually comes time to carry her, Match ends up holding on too hard and popping her. She carries Bubble more gently on the second try.

In "A Leg Up in the Race", when Bubble reaches the top of the ladder, Match tells her she did a good job.

In "Don't Lose Your Marbles", Pencil is glad that their alliance made it to the final 11, and Match says it's because they are amazing. Match and Pencil are happy when Bubble finds a ball.

In "Half a Loaf Is Better Than None", Bubble agrees with Match that nobody likes fruitcake.

In "Reveal Novum", Bubble tells Ice Cube that she wonders what Match is doing at the moment.

In "Return of the Hang Glider", Match says she wants Bubble to win Dream Island. When Match suggests that they find out who has Dream Island, Bubble agrees.

In "Get Digging", Match gets the idea to blow bubbles to bring Bubble back to life.

In "Insectophobe's Nightmare 3", Match assures Ruby that the alliance can sustain all four of them. When Pencil recovers Bubble, Match comments that Pencil has no technique, and she replies that she was self-taught. Match asks Bubble if it's nice to be back and explains to Bubble that Ruby in their alliance now. Bubble tells them that having an alliance with more than or equal to four members would cause them to split and become enemies, but Pencil shows her otherwise. Match tells Bubble to watch out for the flying shards of glass but she is popped anyway, making Match sad. She walks over to Tennis Ball and demands that he build a recovery center, since Bubble, among others, is dead.

In "Zeeky Boogy Doog", when presented with the Hand-powered Recovery Center, the first person Match thinks to bring back is Bubble. Bubble immediately pops upon being recovered, so Match and Pencil angrily recover her again.

In "Get in the Van", when Bubble gets called out by Firey Speaker for participating in the challenge, Match helps Bubble disguise herself as a tree. During the challenge, Bubble sees Puffball and Team No-Name flying ahead of them, and asks "what's that?" to which Match replies "It's, like, Puffball."

In "It's a Monster", Bubble agrees with Match that the desert is boring. Match is the one to recover Bubble after the snowball fight.

In "Getting Teardrop to Talk", Match questions who keeps popping Bubble. During the contest, Match asks Bubble if she's thinking and tells her to stop so her heavy thoughts won't weigh her down while she jumps.

In "Lick Your Way to Freedom", when Bubble is declared safe first, Match says "Good like job Bubble." Match questions what they are supposed to do when Pencil is eliminated, Bubble remembers that's what alternates are for. Later Bubble and Match try to get Ice Cube to join their alliance.

In "Why Would You Do This on a Swingset", Bubble asks Match if she can talk "alliance stuff" with her. Match says in a bit, but after they use Fanny to win.

In "Fortunate Ben", Bubble and Match are seen standing together when Flower refers to them as Ruby's ignorant friends.

In "Enter the Exit", Match wants to talk to Bubble and is surprised when she is popped right in front of her. She then looks to X and Donut to get Bubble back. Match is happy to see Bubble recovered, but is disappointed when Bubble doesn't speak back to her.

In "Get to the Top in 500 Steps", Bubble gets angry when Match criticizes iance and says that everything would be fine if Pencil wasn't eliminated. Bubble confronts her, and says that she does not need Pencil, or a stern leader, she needs Match to behave as herself, Bubble's friend. Match apologizes for trying to be somebody she is not, as well as lying about knowing the quiz answers and demoting Bubble, and Bubble appreciates that Match is sorry, but Bubble says that she cannot forgive her yet. Match is angry about this at first but lets it go.

In "What Do You Think of Roleplay?", Bubble feels that it is her fault that Match was eliminated, since she didn't forgive Match completely. Because of this, Bubble starts to act more forgiving to others, even those who pop her. When Fanny tells Bubble that she doesn't need Match, Bubble responds by saying that Match is her best friend.

In "Cycle of Life", when Pencil accuses Announcer of murdering Bubble, Match acts indifferent. After Match accidentally pops her during the challenge, she says to herself that Bubble better get back soon.

In "Getting Teardrop to Talk", when Pencil and Match cheer over Spongy being zapped, Bubble states that she thinks her alliance has changed.

In "Are You Smarter Than a Snowball?", when Bubble greets Pencil and Match as guys, Match angrily pops her and says "We're girls". Bubble doesn't hold it against her since killing her is really easy. Later Pencil and Match agree to rip up Bubble's test since they think she's dumb and would only fail.

In "Sweet Tooth", Match and Pencil call Bubble dumb because she can't count to three, though it was only because she kept dying before she could get to three.

In "Zeeky Boogy Doog", Pencil and Match scold Bubble for dying immediately after they recovered her the first time. Bubble apologizes.

In "Getting Teardrop to Talk", Match and Pencil get angry at Bubble for making Lightning decide not to zap Flower, which makes Pencil demote her to Bember, with Match agreeing.

In "Questions Answered", Match puts a lot of pressure on Bubble to answer the questions correctly for their team. After Bubble answers the 2nd question wrong, Match demoted her from Bember to Bemb. After Fanny told Bubble about how Match didn't know the answers, Bubble made enemies with Match by ignoring her until "What Do You Think of Roleplay?".

In "Enter the Exit", Bubble is mad at Match for being a hypocrite and refuses to talk to her.

In "Get to the Top in 500 Steps", when Match says that she hopes Pencil rejoins, Bubble looks at her angrily. 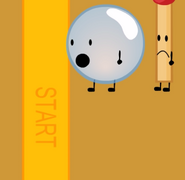 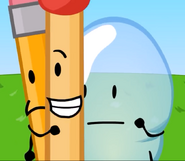 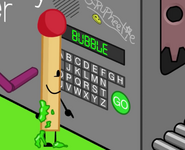 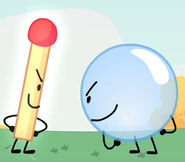 Match greeting Bubble after she is recovered, but is silently ignored 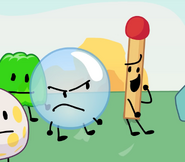