Battle for Dream Island Wiki
Register
Don't have an account?
Sign In
Advertisement
in: Other, Creatures, Non-Objects,
and 6 more

Black with purple dots, or grey with red dots

Bugs are creatures created by the Announcer that inhabit Goiky. They are generally passive, but when provoked or in large groups they will poison and consume their victims.

In "Take the Plunge: Part 1", Match mentions that Flower got surprised and went crazy when she saw a bug.

In "Don't Pierce My Flesh", a single bug is seen on a railing on a bridge where Flower and Firey are seen, and after Firey says that it is present, Flower gets a large sledgehammer and smashes it, breaking the bridge in the process.

In "Insectophobe's Nightmare 3", the challenge was to kill bugs. Team No-Name and W.O.A.H. Bunch are forced into glass containers, which were then filled with fireproof bugs. The bugs then proceed to poison and kill Yellow Face, Teardrop, Fries, Rocky (who eats one of Fries' poisoned fries and gets poisoned too), and Golf Ball. Nickel and Gelatin then suggest igniting Bomby to explode the bugs, which works.

In "Zeeky Boogy Doog", some bugs get pushed out of Yellow Face's mouth when his dead body is hit by the Eiffel Tower's tip.

In "BFDI Is Back", a bug appears on the front cover of the book The Creatures Of Goiky.

In Battle for BFDI, the bugs appear on the front cover of some books, for example, Donut's Diary, because they share the same cover as The Creatures Of Goiky. One appears in "The Escape from Four" in Rubber Spatula's audition. Rubber Spatula swats it with their face, leaving a sticky gunk connecting their face with the ground.

Bugs appear in larval form in "Let's Raid The Warehouse" in a large green bag in Yellow Face's Warehouse. Firey suggests to give them to Flower, but Taco says Flower hates Bugs. The bugs are not physically seen aside from the bag's movement, but one is pictured on the bag.

In "The Hidden Contestant", Four makes up a challenge to destroy some bugs to make Profily lose, but they kill all of the bugs almost instantly.

In "Uprooting Everything", bugs are used as prizes for Cake at Stake.

In "SOS (Save Our Show)", during the show Purple Face's Torture Time, Flower is placed in a tank with a bug. However, she is no longer afraid of bugs as she's been working on getting over her fear. Purple Face then drops hundreds of bugs inside and this causes her to panic. She gets surrounded by more bugs after getting booed onstage for trying to say her name in different ways.

In "Chapter Complete", a couple bugs can be seen as part of the grand cake.

Bugs mostly come in two varieties: they can either be a dark-grey with purple spots or a light-grey with red spots, they can have four or five legs, and some of them have a twin set of venomous stingers. When crushed, bugs leave behind a sticky grey adhesive.

Some bugs appear to be passive, but in large groups, they can get aggressive and eat everything in their way and some bugs with stingers appear to be hostile. Bugs are omnivorous, in "Insectophobe's Nightmare 2", they ate a rock, the TLC (which is made of metal), and the recommended characters. 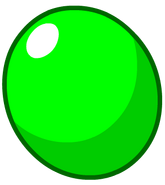 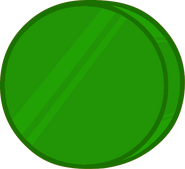 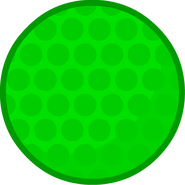 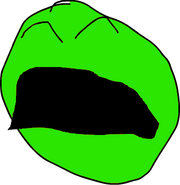 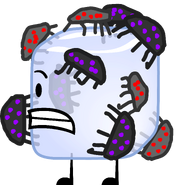 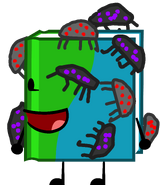 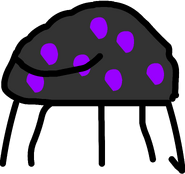 A bug with poison stingers

The bugs eating a rock

Yellow Face after being poisoned

Teardrop gets poisoned by the bugs

Fries gets poisoned by the bugs

Rocky gets poisoned by eating a fry out of poisoned Fries 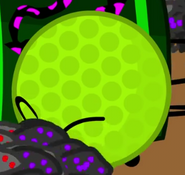 Golf Ball gets poisoned by the bugs 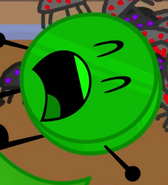 Coiny gets poisoned by the bugs

Rubber Spatula swatting a bug in their debut audition for TPOT

Bugs in the Grand Cake
Characters
Community content is available under CC-BY-SA unless otherwise noted.
Advertisement