Battle for Dream Island Wiki
Register
Don't have an account?
Sign In
Advertisement
in: Deceased, Characters, Recommended Characters,
and 6 more

CRT (short for Cathode Ray Tube) is a genderfluid[1] recommended character who appeared in "Uprooting Everything". They are a CRT monitor that nobody knew and everyone pushed around.

CRT is a CRT monitor, a monitor powered via a tube ray typically for computing purposes. Their screen is a dark unsaturated green in color with a beige colored plastic shell. They have their facial features drawn in white.

CRT tended to be positive and passive to those around them. They agree with other characters' opinions on a whim even if they didn't know them, being judgmental and aloof as a result. They wanted to be included within others, trying to involve themself in their conversations.

In "Uprooting Everything", CRT randomly appears on Four's bus, occasionally jutting into the scene throughout the episode and being questioned as to who they are. They eventually were given magic by X to feel room-temperature in the World's Largest Oven and left the bus. CRT eventually followed Leafy, Gelatin, and Purple Face to a room in the back of the oven, where they were all trapped temporarily. Once they got out, Leafy and Gelatin began to argue about how nice Leafy was, and in order to prove that Leafy was nice, she throws CRT into the oven's glass door, burning them into ashes. 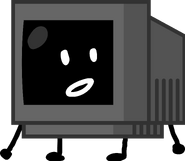 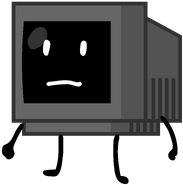