View source
watch 01:39
Who is Cake?
Do you like this video?
Play Sound

Cake is a male contestant on Battle for BFDI and The Power of Two. He first appeared as a recommended character in "Cycle of Life", when Announcer said there was no Cake at Stake.

Cake had a chance to compete in BFDIA, but only received 134 votes, and got flung to the Locker of Losers.

Cake's IDFB redesign features Cake as a slice of chocolate cake, along with a puff of frosting on top and a frosting rim that is strawberry flavored.[1]

Cake had a chance to rejoin the show in "Welcome Back". He got 138 votes, tying with Grassy.[2]

Cake competed with The Losers! on BFB until "The Escape from Four".

Cake is competing on TPOT and is on Just Not.

Cake is a slice of chocolate fudge cake with a meringue puff on top and a pink-red icing rim. He is almost always shown from a profile perspective because his face is on the right side of his body.

Cake is generally a shy and effeminate person, not talking much until it's necessary. Cake has also been shown as a dependent person, often relying on Loser for emotional and challenge-related support, as he is very loyal towards Loser. Cake is also easily frightened.

However, his personality changed in "The Liar Ball You Don't Want", as he stated himself that there is a reason for Loser to be eliminated, despite the fact that Cake often relies on him for help and support, meaning that it's possible that Cake will get close to anyone who he thinks is capable of providing help, and immediately turns his back if he thinks the person has a bad influence.

This anger towards Loser was short-lived, however, as in "Questions Answered", Cake said he knew what the answer to the question was, but he was too afraid to say it because Loser wasn't there to support him. Cake finally got enough courage to press the button and answer correctly after Pin gave an influencing speech.

Cake is a slice of chocolate cake that blushes a lot. He has a dollop of white meringue on top of his head near a smudge of pink frosting. In case you're curious, that meringue is indeed squishy, which entices others to sit on him. Much more than other characters with their own kind, Cake strongly empathizes with inanimate cakes, becoming excited when they're celebrated and upset when they're eaten.

Cake relies on others for emotional support, especially Loser. He clings to Loser because Loser is a nice guy.

Did You Know?: Cake's rim of pink frosting is strawberry flavored.

In "Cycle of Life", what could've been Cake made a brief appearance. When the Announcer said that there was no Cake at Stake, a limbless Cake with a mouth and eyes that was once smiling started to cower when Announcer said there was no Cake at Stake. It is not confirmed if this cake is recommended by anyone, but if it is, then he is the first-ever recommended character.

In "Bowling, Now with Explosions!", Cake appears in a crowd of recommended characters who are watching the Cake at Stake. They are all sealed in a metal box by the Announcer, which randomly sets on fire in the stinger ending.

In "Gardening Hero", Cake made a minor appearance as a gasping recommended character. He was recommended by a user named MVboys.

In "The Glistening", Cake, now named Caked, votes Ice Cube to be eliminated.

In "Return of the Hang Glider", Cake watches the final Cake at Stake from the bleachers with the other recommended characters.

In "Yeah, Who? I Wanna Know", Cake only got 134 votes to join and was flung into the Tiny Loser Chamber along with the others who failed to join.

In "Welcome Back", Cake had a chance to rejoin the show. He got 138 votes.

In "Getting Teardrop to Talk", Cake makes his first speaking appearance in the series. He appears playing tic-tac-toe with Pie. He won the game, and then starts to blush while saying sorry to Pie. However, Pie is okay with losing.

Later on, Cake said that Loser was gonna be with him, along with Clock and Eggy. They all get to join the team together. After Firey names his team The Losers!, Cake, along with the others, chanted "Loser!" three times. During the challenge, Cake tells Loser that it's an honor to be on his team. When the basket falls on him and The Losers! except Loser and Eggy, Loser saves him and the other members, but Eggy is now stuck under the basket.

In "Lick Your Way to Freedom", when Four reveals that iance gets cake when they're safe, Cake is elbowed by Loser causing him to gasp. When Ruby is safe in iance's elimination, Cake said "Yikes!" because Ruby ate the cake. He later appears being sat on by Clock while his clock hands are used by Needle to pull someone out of a jawbreaker.

In "Why Would You Do This on a Swingset", he gasps when iance uses Fanny to swing the full 50 swings. He suggests to do the same, but with Clock. He later figures out that Daylight Savings mean when clocks jump forward an hour. Clock's fast clock hands swing his team to victory.

In "Today's Very Special Episode", Cake is elbowed by Loser when Bottle says they love cake.

In "Four Goes Too Far", he first appears in the heart scene, getting the Twinkle of Contagion once. He is later seen with Eggy, and contracts the Twinkle after Eggy does. Scared he would get the Twinkle again, Cake tells Loser to protect his team. Loser grabs one of X's old baskets to shelter The Losers! from further Twinkle contracting.

He later gushes about Loser along with the other Losers but Coiny and Pin. When Bell starts to break the basket, Cake is scared. It was Clock's curiosity that made The Losers! lose.

In "The Liar Ball You Don't Want", Cake is safe with only 826 votes, the third least votes. Later, Cake is shocked when Loser is eliminated. After Loser's "lie" about the Poppers, Cake turns his back on him, stating he had to go for a reason (though it could mean he's very stressed about what happen). Flower immediately deems him a "hater". He later steps on a dead Taco while Gaty looks at her from the moon.

In "Questions Answered", he is scared to buzz "glue" to the question "What is snow + gasoline?", as Loser isn't there to support him. However, Pin's motivational speech gives Cake enough courage to answer "glue" and he gets it correct.

In "Enter the Exit", he encourages Pin to squirt out Four's liquid remains in his shape in order to recover him, telling her to believe in the Loser in her.

In "Get to the Top in 500 Steps", Cake seems happy when Leafy wants to befriend him and Eggy. He later looks in horror at Needle eating Leafy's cake due to being a cake himself. He later appears happy again when Needle secures The Losers! safety.

In "What Do You Think of Roleplay?", he only appears when Eggy tries to guess which of their teammates are missing.

In "Return of the Rocket Ship", after iance, Team Ice Cube! and Beep jump into the hole made by Lightning, Cake walks towards the hole saying that "Loser's spirit" is telling him to jump into the hole as well. However, he is stopped by Eggy, who says that by jumping in, he would just be a follower. After this, Cake and Eggy start arguing over who's "spiritual connection" with Loser was stronger, until they're stopped by Coiny, who asks them why they're yelling so much.

In "Don't Dig Straight Down", Cake and Coiny are the only known members of The Losers! left alive when Spongy floods the surface with lava. They seek refuge in Golf Ball's Underground Factory, but are stopped on the way down the stairs by Woody and Naily, who are trying to reach the surface, seeing it as safe due to not realizing the danger there. They say that the Factory is filling with lava, but Naily notices a deprecated garbage chute, which she, Cake, and Woody fling Coiny towards so he can unscrew it. Coiny succeeds in doing so, but falls into the lava. Cake, sadly, hopes that Coiny will rest in peace. He and Naily realize that they cannot fit through the chute, but that Woody, being flat, can. The two resign themselves to their fate and tell Woody that they will throw him at it. Cake asks Woody to remember them and throws him. He is last seen burning to death in the lava.

In "The Four is Lava", Cake is recovered by Four. He, like the rest of the team, realize that Clock had been missing when he is recovered.

In "The Escape from Four", Cake is first seen walking to see Four actually struggle at something. He ends up switching to compete on The Power of Two after the BFDI is replaced with A BFB.

In "You Know Those Buttons Don't Do Anything, Right?", Cake is first seen watching TV as he reveals that Four brought back the BFDI as a prize. However, Cake agrees that it isn't worth it to switch back to BFB. Later, Cake tries to speak with Clock but he is distracted by the sight of Winner, who Cake has never heard of. Clock is annoyed that Eggy isn't interested in teaming with Winner and leaves to join them. Cake is upset as he doesn't want to be split up from Clock and Eggy, but Eggy tells him that they barely even hang out, so it doesn't matter. Cake is devastated at Eggy's words and is now alone. Naily feels bad for Cake and asks if he wants to join her and Bomby. Cake, still upset, accepts her offer. During the challenge, Cake's team takes the elevator to get to the top of the building. It gets stuck however, when Snowball forced the elevator door open. While they are stuck, Cake starts to say that he could really go for something when the elevator suddenly drops. It lands on Basketball and they bounce straight up to the top, their team is the third to last safe.

In "The Worst Day of Black Hole's Life", Cake feels insulted after hearing Fanny shout "I hate cake!". Price Tag tells him not to worry as Fanny meant the food. During the challenge, Cake, Price Tag, and Nickel accuse Tree of sabotaging their stack. Tree says he isn't and is just stealing their blocks. Cake is okay with this at first, but then shouts that Tree shouldn't do that either. Tree casually walks away with an arm full of Just Not's blocks anyway, so Cake, Price Tag, and Nickel decide to defend their stack. Price Tag immediately decides to wander off, to Cake's annoyance. Later, Cake, Book, and Nickel talk about Pillow, Price Tag, and Naily all being absent from the challenge. Pillow eventually wanders back to the team, with Remote following her to prevent her from killing anyone else. Cake doesn't believe Remote and accuses her of wanting to mess with their stack. Remote decides she can do both and kicks down Just Not's stack of blocks. With six blocks in total, Cake's team is safe. 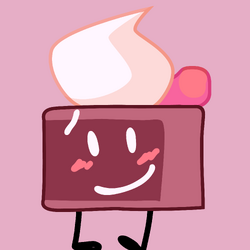