Best friends
This article is dedicated to the relationships and interactions between Cake and Loser.

Cake is considered to be Loser's biggest fan as he obsesses over Loser, was almost always around him prior to his elimination, and continues to bring him up from time to time.

In "Lick Your Way to Freedom", when Four said he had 7 slices of cake, Loser nudged Cake, causing him to blush.

In "Why Would You Do This on a Swingset", Cake repeats "Daylight Savings" with the rest of the Losers, excluding Clock, when Loser tells them to say it with him.

In "Four Goes Too Far", Cake tells Loser to save their team from the Twinkle of Contagion, Loser drops a basket on top of the team in response. Cake and Loser stay near each other throughout the length of the contest.

In "The Liar Ball You Don't Want", when Donut said he has "cake", Cake was expecting a nudge from Loser again, but he was too far away from him. He also gasped with the rest of his teammates when Loser was eliminated.

In "Questions Answered", Cake said he couldn't press the Buzzer without Loser's support.

In "Enter the Exit", when Pin is nervous about reviving Four, Cake tells Pin to believe in the Loser in her.

In "Return of the Rocket Ship", Cake claims that Loser's spirit was telling him to jump into the same hole that several other teams jumped in to. Cake then argues with Eggy, saying that his spiritual connection to Loser is stronger than hers.

In "The Liar Ball You Don't Want", after Loser was eliminated, for some reason, Cake said, "He's gone for a reason". 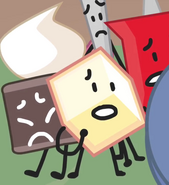