View source
watch 01:15
Who is Camera?
Do you like this video?
Play Sound

Camera returned again in BFB 7 when Donut was hosting Cake at Stake. Lightning pulls them out during the scene to take a picture of Donut.

Camera appears in The Tidepool in the Uber-Evolved mode as a level 91 creature. In them, Camera loses their tripod and is named "Camera of Joy".

Camera was up for voting in "The Escape from Four" to join Battle for Dream Island: The Power of Two but fails to join, only receiving 1,124 votes, placing 16th.

Camera appears to be a digital single-lens reflex video camera, a portable small camera for general photography and film recording. Their body is a dark gray, the zoom lens is a smoky gray, the lens' shine is a light gray, and the recorder is a dark cobalt blue. They have a white face on the front of the lens that shows when they are used to take pictures.

Camera appears to be somewhat snarky and kind of a bully, as they make fun of Clapboard when they see them being eliminated from the debut. But also caring about their public image, as they will request to have their face obscured with their lens cap in moments of embarrassment.

Camera made their first appearance in "Bowling, Now with Explosions!" as a poorly drawn character with legs and was named Camery. Camery was walled in by Announcer to keep the Cake at Stake private, but was later burned to death in the night scene along with the rest of the recommended characters.

In "The Reveal", Camera appears as part of the large crowd watching the elimination for that episode along with the rest of the recommended characters.

In "Return of the Hang Glider", Camera appeared twice, the first as part of the episode 17 crowd, and once again as a unique recommended character for the episode 25 section.

In "Get Digging", Camera made a cameo in Teardrop's flashback.

In "Welcome Back", Camera appears once again as part of FreeSmart on the Yoyle Needy and is recording video diary day 1127. Pencil finds out that Ruby left the lens cap on it, and for that reason, the video diaries are worthless. It makes its physical appearance when Bubble tells Ruby that she has to remove the lens cap before recording. Camera is also seen next to Bubble and Ruby while they eat the gumdrops they saved. Bubble then violently shakes Camera and says how much she loves green gumdrops and then ate it. Camera once again appears at the zoom out of Book asking Ruby if she left the lens cap on Camera the whole time, and she says "maybe". Pencil replies upset and says that 3 years of video diaries vanished. After the Yoyle Needy zoom in, Camera disappears, it might be possibly a mistake.

In "The Liar Ball You Don't Want", Camera made a cameo appearance with Lightning. They were used to take a picture of Donut. They initially were fully zoomed in, until Lightning zoomed out to see Donut.

In "Questions Answered", after the (fake) voting screen comes up, Match destroys it and goes to Donut saying they truly won. Camera, angry, replays the footage of Stapy and Puffball cheating, and as a result, and thanks to Camera, iance is safe from elimination.

In "Enter the Exit", Eraser shows Foldy the footage of Stapy cheating.

Camera became eligible to become a contestant in "The Power of Two". In their audition, they replay footage from "Welcome Back", only to be interrupted by Clapboard, and stops playing the footage.

In "You Know Those Buttons Don't Do Anything, Right?", Camera is at the Hotel for Cake at Stake. After the eliminations of Conch Shell, Boom Mic, and Clapboard, comments that they will see them in "post production". Camera is eliminated with 1,124 votes along with Blender and Onigiri, where after Camera learns their fate, asks to be hidden due to embarrassment. Blender grabs Camera's lens cap from Onigiri's mouth and puts it on their face before descending into the hotel below. They can later be seen on the fifth floor of the hotel along with 9 Ball, Kitchen Sink, Shampoo, Boom Mic, Leek, and Tape. 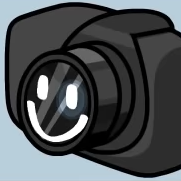