He is a writer for BFDI and was also the primary animator for the first three seasons of BFDI. Cary rarely animates as of BFB, although he did animate a small segment of "Don't Dig Straight Down".

Cary is the creator and owner of carykh, Abacaba, Cube Roll, Humany, and lazykh. In carykh videos, he uses a stick figure named Sticky[3] to represent himself in animations. The stick figure has never appeared canonically in the BFDI universe, but made a non-canon appearance in "Thanks for 4 years of Thanks for 4 years!".

Match (pitched up by 4 semitones and formant up 2 semitones)

Pin (pitched up by 4 semitones)

Ruby (IDFB, BFB, pitched up by 12 semitones and formant up 2 semitones) 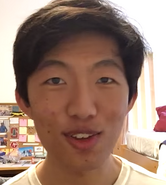 Cary and Michael Huang in December 2008

Cary and Michael Huang in 2009 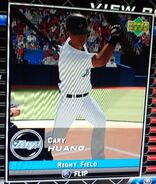 Cary, along with Micheal and Adam

Cary dancing in a video on Humany

Cary's photo in the 2019 Stanford Yearbook