carykh (the "kh" standing for Kaiming Huang) is one of Cary Huang's personal channels. This channel is well known for 3 shows: The Amazing Marble Race, Algicosathlon (finished), and Ten Words of Wisdom. The channel was verified on YouTube on April 20, 2018.

The Amazing Marble Race by carykh has 3 seasons.

The first season was uploaded on December 21, 2011. This marble race has two parts with 15 marbles. The winner is Orange, which won in 20.7 seconds. In second place is Black, which won in 55.1 seconds. The third place is Yellow, with 1 minute and 27 seconds.

The second season was uploaded on February 23, 2013. It is shorter than the first season because it only has 1 part and 8 marbles. This time, Blue is the winner, Yellow (who placed third in first season) is in second, and Brown came in third place.

The third season began on March 31, 2015. Each leg is a separate video. This season features 56 two-colored marbles. 10 marbles were eliminated in the first leg, 9 marbles on the second leg, and so on. This season is not finished yet; as of 18:39, 5 October 2021 (UTC), eight legs have been released. Four marbles (

BFDI Mini-Season - "Marbles" is a "spin-off" of the usual Marble Race style, but the marbles are based on the appearance of the assets of the original 21 BFDI contestants.

B.A.G.U.E.T.T.E. (Battle Among Gelatins Using Expertise To Take Everything) was the first official BFDI/BFDIA Camp. The camp was announced on September 1, 2012, when it was announced that BFDIA was going to be monthly again. After a 3-year hiatus, it was officially cancelled in favor of TWOW.

Ten Words of Wisdom (TWOW) is an ongoing camp started on December 12, 2015, by Cary Huang. As B.A.G.U.E.T.T.E. was confirmed to be canceled, this show is now its successor.

In the camp, contestants are given a writing prompt, which they must answer or conform to using exactly 10 words (or less). Unlike B.A.G.U.E.T.T.E., the time limit is very strict (as the competitors MUST answer in time), and the contestants in this camp are now Books instead of Gelatins. 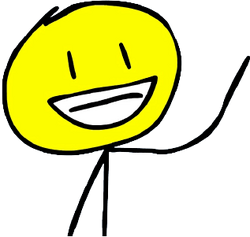