Battle for Dream Island Wiki
Register
Don't have an account?
Sign In
Advertisement
in: Characters with unknown genders, Characters, Recommended Characters,
and 16 more

The Cheese Orb was one of the many sham "announcers" that appeared in "Hurtful!".

The Cheese Orb first made their sole noteworthy appearance in "Hurtful!" where they were sliced to four pieces by Announcer and used as cake during that episode's Cake at Stake. Upon their death, several other contestants mourned the Cheese Orb's death and claimed they were their friend.

The Cheese Orb later appeared in "Insectophobe's Nightmare 2" as a recommended character by shadowmario899. This also means that the Cheese Orb appears in the stands in "Return of the Hang Glider".

A Cheese Orb Recovery Center appeared in "Return of the Hang Glider" and was destroyed by Flower when she threw it into an incinerator. The Cheese Orb was seen as part of the Grand Cake as the cheesecake.

Announcer slicing Cheese Orb for the Cake at Stake prize. 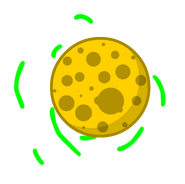 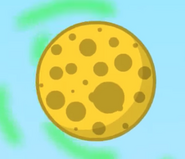 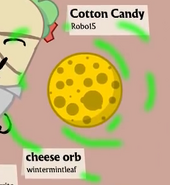