This character has light in his design.

"Fashion For Your Face!"

Clip is a recommended character that made his debut in "Fashion For Your Face!".

Clip did not talk in his first appearance, but he was happy to help the Have Cots with attaching a roof to their train car. Clip appears again and speaks in "The Hidden Contestant", where he appears to like clip-related puns, somewhat similarly to Naily with nail puns.

Clip is a silver clip that has 2 holes, a white shine, and both arms and legs.

Clip was first seen in "Fashion For Your Face!" as a clip to attach a roof to a gondola car on the 200 year old steam train by Leafy.

Clip appeared again in "The Hidden Contestant", where he wanted to join Battle for BFB as contestant, wanting to star in "great clips". Four disagreed with him, along with Rusty Coin and Steamy, and left all of them behind at The Pillary Ruins when they left on their bus. 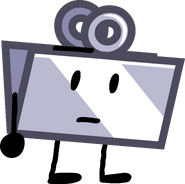 Characters
Retrieved from "https://battlefordreamisland.fandom.com/wiki/Clip?oldid=2634108"
Community content is available under CC-BY-SA unless otherwise noted.