View source
watch 02:20
Who is Clock?
Do you like this video?
Play Sound

Clock is a male contestant in Battle For BFDI and The Power of Two. He was one of the 30 recommended characters that had a chance to join the show. He, along with Basketball, only got 5 votes and was sent to LOL.

He also had a chance to join BFDIA, but he only got 59 votes.

Clock competed in BFB on the team The Losers! until "The Escape from Four.

In TPOT, Clock is competing on the The S!.

Clock appears to be a bluish-grey and white minimalist wall clock.

His fastest hand makes one revolution a minute.[BFB3]

Fast clock hands can be triggered by daylight savings time.

Prior to joining The Losers!, Clock acted very self-righteously, being quick to condemn Liy, Ice Cube, Bracelety, and Teardrop, despite those last two doing no wrong. He was also slow in forming a truce with Liy and snapping at her when she tried to touch his clock hands to shake them.

When Clock joined his team, he began to act in a more calm and sophisticated manner, and he was very eager to help his team during multiple challenges, such as launching the basket, allowing Needle to use his clock hands to break open jawbreakers, and using his ticking motions to move his team's swing.

He also volunteered to investigate what was cracking the basket in "Four Goes Too Far", showing that sometimes his eagerness to help gets in the way of his proper judgement or common sense.

Clock is also seemingly a character of order and is a stickler for the rules. He relayed to Four in "Enter the Exit" which characters were dead and which were eliminated. Although Stapy simply wanted to stay to watch the competition and see Foldy again, Clock insisted on him being eliminated.

Clock may seem to be stingy, demanding, and annoying, but he wants to do well in challenges. Specifically, his adept clock hands have helped in multiple team victories. Because of this power, Clock does not like when people touch his clock hands.

Clock stands up for those who have been wronged, especially if they have been wronged by Liy. He now has a truce with Liy, but Ice Cube barged into that truce as well, so now everything's weird.

Did You Know?: Clock can change the position of his hands whenever he wants, but if he waits for them to move naturally, they are infinitely powerful.

In "Half a Loaf Is Better Than None", a very badly drawn Clock runs into a vat of hydrochloric acid to retrieve the Announcer's marbles.

In "The Reveal", Clock is one of the 30 handpicked recommended characters who can join the game. He says that watches are wannabes in his audition.

In "Reveal Novum", Clock said "That's good to know" when the Announcer said that they all got at least 3 votes. Clock, along with Basketball, only received 5 votes, placing 23rd, and was sent to the Locker of Losers.

In "Return of the Hang Glider", Clock is in the large crowd of Recommended Characters who are watching the final Cake at Stake.

In "Yeah, Who? I Wanna Know", with 59 votes, Clock only placed 54th to join and was flung to the LOL once again.

Clock made a cameo appearance in "Get in the Van", standing in front of a glass window with Balloony, displaying the time "CAS" in place of 4:00, alerting Firey that it was time for Cake at Stake.

Clock was given a chance to return in "Welcome Back". However, IDFB 2 was delayed, voiding his votes. However, it was revealed he got 37 votes, only beating Bottle and Bracelety.

In "Getting Teardrop to Talk", he makes his first major, speaking appearance in the BFDI series. He is first seen telling off Bracelety for her support of Liy and Ice Cube's "torture" of Teardrop. Fanny then says she hates Clock, despite him not doing anything bad to her. When asked why, Fanny says that one's actions may be worthy of hate.

After a quick conversation between Fanny and Bracelety, Clock tells Liy and Ice Cube to stop "tormenting" Teardrop. While Liy won't stop, Ice Cube does, and Clock is proud of Ice Cube. However, Ice Cube starts to wiggle Teardrop's vocal cords again shortly after being guilt tripped by Liy, enraging Clock.

That leads to an argument between Clock and Liy, which was cut short by a fork landing on Teardrop's head and chomping on Ice Cube's legs. Clock is quick to tell off Teardrop for biting Ice Cube's legs. Teardrop then smacks Clock and leaves. Clock and Liy restore their friendship through a truce. Ice Cube then becomes part of the truce group. He is seen later with Eggy and Cake, the three of them wanting to join Loser's team. After the teams are formed, Clock tells Four to "quit his shenanigans", but is dismissed. During the challenge, Clock is shocked at Pin's ignorance of Loser. Later, he uses his clock hands to launch a basket at X, deeming his team safe.

In "Lick Your Way to Freedom", he asks Four to bring back the dead objects but is screeched at. His clock hands were used by Needle to crack open a jawbreaker. However, there was no one inside. Gaty was freed from another jawbreaker, securing their team's safety for another day.

In "Why Would You Do This on a Swingset", his clock hands were pivotal in winning The Losers! immunity again. After seeing iance use Fanny as a motor for their team's swing, Cake suggests using Clock to do the same. However, Clock's fastest hands go at 1 RPM, saddening Eggy. Pin calls him lazy. Loser's idea of using daylight savings saved the team.

In "Today's Very Special Episode", he is one of the other witnesses of Lightning's zapping of Bell. He calls it the "biggest zaptation" he's ever seen. He doesn't participate in the challenge, however, but Eggy and Loser's quick makeover of Four, with X inside, saved them.

In "Four Goes Too Far", he is first seen in the heart scene. Loser's usage of one of X's old baskets temporarily saved his team. When Bell starts to break the basket, Clock makes it his duty to find out who's causing it. When a hole is made in the basket, Bell passes the Twinkle onto Clock, and at the last second. Since Clock has the twinkle, The Losers! lost. Eggy tells off Clock for making the team lose, he apologizes and reminds her that he was the object who won them challenges 1 and 3.

In "The Liar Ball You Don't Want", in Cake at Stake, Clock is the third safe with 2,166 votes. After Loser is eliminated, he says that it's horrifying how he was placed inside a jawbreaker by Donut.

In "Questions Answered", Clock rings when it's time for Cake at Stake. During the challenge, when Cake is too scared to do the challenge without Loser to support them, Clock says "Same, same!" The Losers! are safe thanks to an encouraging speech from Pin.

In "This Episode Is About Basketball", Clock rings with Dora when it's time for Cake at Stake.

In "Enter the Exit", before X says what the contest is, Clock interrupts X by shouting "Bring back Four!". After many attempts, Four is brought back. When Four was about to ask X who the other eliminated contestants were, Clock interrupted him by saying that he first has to recover their (the contestants') dead friends. Four false-screeches him before agreeing. After Clock lists all the contestants who died, he is asked by Four about who was eliminated while he was gone. He mentions Stapy, who gets upset at him for revealing that he was eliminated and said that he just wanted to stay and watch. This leads to Clock stating that watchers are wannabes (which is a reference to his debut when he says "watches are wannabes"). Stapy was about to finish his sentence before being sucked up into Four. Clock also tells Four that Roboty was eliminated, but before telling them that no one knew where he went, Four zooms away to find him. Later, Four is in EXIT, which means that on the outside, they're just standing blankly, much to Clock's confusion.

In "What Do You Think of Roleplay?", Four indirectly mentions Clock by saying to The Losers! that they were missing someone. Eggy is stumped and asks Four if the question was part of the challenge and Four says no; and that they were XQZ'D (excused).

In "Return of the Rocket Ship" Eggy attempts to revive Clock, while still failing to remember his name. Clock was not recovered.

In "The Four is Lava", Clock was finally recovered by Four, confirming his death in BFB 10. When his team finally remembers him, Clock is confused. Needle almost tells him that they forgot about him, but Eggy interrupts, saying they forgot what it was like to be without him and really miss him, to spare his feelings. Clock then asks what episode it is, and Leafy happily answers "fifteen!" Clock walks away from his team after hearing this, sarcastically talking about how cherished he feels by his team before realizing he's just talking to himself.

In "The Escape from Four", Clock is first seen walking with the other contestants to watch Four struggle to suck up Spongy. Clock is then seen attempting to pull the eliminated contestants out of Four. Clock at first stays with Four but later switches, after the BFDI is replaced with A BFB, to compete on TPOT.

In "X Marks the Spot", Clock is in the crowd of contestants who gasp when X is lassoed away by the Four Colored Team.

In "Chapter Complete", Clock urges Two to do something about the sun, after it has turned blue due to Four sinking into it, but Two chooses to stay out of it.

In "You Know Those Buttons Don't Do Anything, Right?", Clock learns that Four brought back the original BFDI as a prize, but agrees that switching isn't worth it since Four is too untrustworthy. During Cake at Stake, when Two says everyone got at least 200 votes, Clock references his "That's good to know" line from "Reveal Novum", until Two says they're lying. Two later says that some of the remaining recommended characters got at least 1,000 votes, and Clock asks if they're telling the truth as he no longer trusts them.

When picking teams, Clock is surprised to see Winner and is shocked to learn that Cake and Eggy don't know them. He then explains how Loser and Winner use to do everything together until Loser hit the mainstream and Winner faded into obscurity. Clock decides he'll team up with them without his former Losers. Clock later invites Ice Cube to his team of him and Winner, remembering their truce from BFB 1. Once they had a enough members, Clock says they should be called The Winners!. Winner isn't comfortable with their name being in the team name, so the name is changed to The S!.

During the challenge, they attempt to have Cloudy lift everyone to the top of the building, but they ditch that idea after seeing Rocky fall through and vomit inside him. Their next strategy is having Winner throw everyone to the top. This works for the most part but Bottle ends up shattering on impact. Clock then pushes Yellow Face over to make for a soft landing for Ice Cube. Clock talks Two into letting their team be safe since Bottle's shattered body is technically at the top of the building. After Winner climbs their way to the top, they are the second team safe. 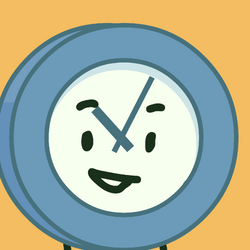