Battle for Dream Island Wiki
Register
Don't have an account?
Sign In
Advertisement
in: Articles with broken or dead links, Recommended Characters, Characters,
and 12 more
English

View source
watch 02:19
Who is Cloudy?
Do you like this video?
Play Sound

Thunderstorm (in "The Reveal")

Cloudy is a male contestant in Battle for BFDI and The Power of Two.

He was a recommended character who appeared in "Don't Lose Your Marbles", "The Reveal", and "Reveal Novum" as one of the 30 recommended characters voters could vote for to join Battle for Dream Island. However, he only got 4 votes and was blown away by Fanny to the Locker of Losers along with Bell.

In Battle for Dream Island Again, he only got 97 votes and did not join the game, but he was the highest-ranking contestant to have less than 100 votes. He, along with the other eliminated contestants, was flung to the Tiny Loser Chamber.

In Battle for BFDI, Cloudy finally got to compete and was on team Beep.

Cloudy now competes in Battle for Dream Island: The Power of Two on The S!.

Cloudy appears to be a white cumulus cloud. His main body is white, and his outline is gray.

Cloudy is generally a happy person. He changes climate depending on his mood. In "Reveal Novum", he turns into a rain cloud when he is sad, turns into a thunderstorm when he is mad and is white when happy or neutral. He seems to have a thick accent, tending to voice voiceless consonants in words, and vice versa (example: dog = tok).

Cloudy seems to dislike being bossed around or forced to do tasks, as shown in "Lick Your Way to Freedom" when he appears to be uneasy when Leafy assigns him multiple jobs to do for the challenge.

Cloudy is also notably a collector, as he enjoys collecting many things and even has a pile of assorted items he owns. He seems to cherish his collected items quite a bit and will get mad when somebody breaks one, as he was shown to be extremely upset at Coiny for accidentally breaking his window twice.

Cloud[sic] is a big puffy cloud! Cloudy likes to collect things like jawbreakers, favorite numbers, friends, trinkets, and various artifacts from previous challenges. If you're not careful, he may even try to collect you!

Cloudy encourages his teammates when the going gets tough. He sometimes has trouble saying consonants and says co-host X's name as "eggs".

Did You Know?: Cloudy feels comfortable in his own "body" but gets strange looks when he shares that with people.

In "Don't Lose Your Marbles", Cloudy can be seen when the sun rises.

In "The Reveal", Cloudy is revealed to be one of the 30 handpicked recommended characters who can join the game. Cloudy's audition is starting a thunderstorm, with the help of Lightning

In "Reveal Novum", Cloudy and Bell both got only 4 votes to join, and they are blown away by Fanny. Despite neither getting flung, they both end up in the Locker of Losers.

In "Return of the Hang Glider", Cloudy watches the final Cake at Stake with the other recommended characters.

In "Yeah, Who? I Wanna Know", Cloudy only gets 97 votes to join the show and is sent to the Tiny Loser Chamber.

Cloudy has a cameo in "No More Snow!" where he strikes Lightning into a tree, causing it to fall on and kill Pin, who was stuck where it landed.

In "Welcome Back", Cloudy is given a chance to join the show by being voted out of the TLC.

In "Getting Teardrop to Talk", he first appears when Coiny asks Snowball to throw Pin's blueberry seeds into the pot, getting angry and turning into a cumulonimbus cloud (thunderstorm) when the blueberry seeds hit his window.

He is later seen along with Nickel, 8-Ball, and Gaty after Fries denies a friendship with Leafy. Cloudy accepts Leafy's friend request since he wants to "collect as many friends as possible". When 8-Ball asks Gaty what her favorite number is, Cloudy mentions that he has thirty-seven favorite numbers that he has collected over the years.

He is then picked into Leafy's team since she wants to help him along with Nickel, Rocky, and Woody. During the challenge, he is seen trying to get the basket using his teeth, but then Balloony jumps onto the basket and deflates himself to give the basket to X.

In "Lick Your Way to Freedom", he tries to get a jawbreaker to his team with his teeth, but Leafy assigns him a job, and Cloudy responds negatively, putting the jawbreaker inside him and taking it to his team. Cloudy spits it out in front of Nickel, and then adds Leafy to his list of items to collect. He later sees Roboty with the jawbreakers, asks him how it's going there, then accidentally crushes him, scaring Woody. They lose the contest since they couldn't find a jawbreaker with someone inside. Cloudy is angry at the sight of Balloony's supposedly dead body, but Leafy shows him that he's still alive and just needs to be inflated. Cloudy is horrified at the sight of Leafy popping Balloony in the process.

In "Why Would You Do This on a Swingset", he receives 911 votes at Cake at Stake, and upon receiving his Earth, his says his planet collection is complete. He then asks Nickel what a man is, and Nickel tells him that David is a man, causing Cloudy to vomit. When X comes back and Four tells him that nobody noticed he was gone, Cloudy points out that he did notice it. During the challenge, Roboty tells Balloony "FLY" in Morse code, asking Cloudy to move the swingset just like Puffball did for her team.

In "Fortunate Ben", he receives his bandages when Four forbids flying in the challenge. He thanks David for piloting the plane but ends up getting hurt during the ride. His team loses the contest when they end up hitting the ground.

In "Four Goes Too Far", he receives only 956 votes at Cake at Stake. When he turns orange, he apparently is now made of evaporated tangerine juice instead of evaporated water.

In "The Liar Ball You Don't Want", Cloudy appears very briefly, having to blow in order to move himself away from the Cake at Stake area, since he can't fly, at Donut's request.

In "Questions Answered", he is seen when Donut is making the whole Earth go through his camera that transmits matter. He then gets the 2nd question right, the answer being "Gluck gluck hork pork". Although, his accent may have made the answer sound different than it actually was.

In "This Episode Is About Basketball", Cloudy is first seen consoling X after the latter gave the voting results backward. During the challenge, Cloudy tells David and Woody only they can do the challenge since only they have arms. David does not help the team. When Woody tries helping, Cloudy successfully encourages him to throw one ball, but it still results in them being up for elimination.

In "Enter the Exit", Cloudy tells X about he's starting to miss Balloony. Cloudy asks X to bring back Balloony, which neither he nor Donut are able to do. Cloudy is saddened by this, but cheers up when X tells him he's safe before Cake at Stake has even started. Later, when Bottle hits Golf Ball with a golf club, he complains about his window being broken again, though neither he nor the window is shown. When Four recovers the dead contestants, Cloudy is happy to see Balloony again. Balloony comments on Cloudy's bandages still being on and takes them off. It is revealed the bandages did not allow tangerine juice to pass through, making him have white lines on his body.

In "Get to the Top in 500 Steps", Cloudy, along with the rest of his team, backs away from Leafy when it was revealed she rejoined. Four also prevents Cloudy from participating in the following challenge because of his ability to fly.

In "Return of the Rocket Ship", Cloudy requests that Four recovers Balloony. Later, Golf Ball's Mutual Mind Reader reads Cloudy's mind, which consists of the thought, "I wanna collect X's treasure!" In return, he receives Golf Ball's thought: "What's this? 'I'm Golf Ball and the square root of 49 is 7'?" During the challenge, Cloudy follows his team down the hole iance started, being the only one who isn't falling. Later while underneath the ground, Cloudy tells off Balloony for forgetting to bring shovels. Balloony then makes Rocky barf acid in order to help with the digging. Nickel and Woody celebrate the latter's idea, but Cloudy tells them to stop and to jump in.

In "Don't Dig Straight Down", Cloudy is scared that he and the rest of the team will disintegrate because of the acid. Nickel then reminds him that he can fly since his bandages are gone. He remembers and gets grabbed by the rest of the team. After discovering lava, Cloudy gets told to turn around several times. After noticing they're trapped, Cloudy says that they need to get Rocky to barf more acid, which the others get to happen. Soon, Cloudy, along with Naily and the rest of his team, lands on top of Golf Ball's Underground Factory. Later, when Balloony is killed by lava, Cloudy is glad he and Rocky are short and expresses concern for Woody for being medium-height. However, after Woody lies down, Cloudy says Woody is lucky that he is now the shortest. Naily tells him to stop comparing heights, so Cloudy, Naily, Woody, and Rocky start banging the factory to get through. He dies shortly when lava falls on him.

Cloudy is mentioned in Book's happy thought that she receives as a prize for being safe at Cake at Stake, where the events of "Reveal Novum"'s debut with Book being the winner. In it, Cloudy has the same definition as "Reveal Novum".

In "The Escape from Four", he is recovered by Four. He is later seen with the other contestants, wanting to see Four struggle at something. He is then seen biting Lightning's head to help the eliminated contestants escape from Four. Later, Cloudy switches over to TPOT after the BFDI is replaced with A BFB.

In "X Marks the Spot", Cloudy mentions how X was there for him when Balloony died, and tells the Four Colored Team that they better not take X away. He’s happy when X gets glued to the ground so he can stay as the host, and is angered when Four Colored Team ends up lassoing X away.

In "You Know Those Buttons Don't Do Anything, Right?", Cloudy learns that Four brought back the original BFDI as a prize, but agrees that switching isn't worth it since Four is too untrustworthy. Cloudy asks Ice Cube why she looked so angry when Two said "pencil". During the team picking, Cloudy listens to Yellow Face's offer before teaming up with him and Rocky. He also teams up with Winner's group, wondering if they were also a cloud since he's never collected more of himself. During the challenge, Cloudy tries carrying Rocky, but flying too fast results in Rocky falling through, vomiting in him before it all falls out. When the team realizes they can use Winner to throw everyone to the roof, Cloudy simply flies to the top. 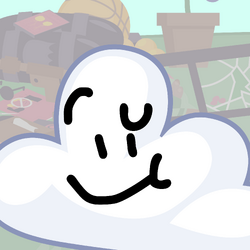