Coiny and Firey's relationship has been one of the most iconic and volatile in the entire series. Since Coiny was eliminated before Firey, Coiny was never given the opportunity until the second season to gain an identity away from Firey. According to Cary, their feud began in Total Firey Island, when Coiny got into a fight because he forgot that Firey hated water. Whether this is canon is unknown. Other than this, neither the origin of their feud nor reasons for their friendship are ever made clear.

In "Take the Plunge: Part 1", Firey says that Coiny is "so dumb". Coiny slaps him and tells Firey that he is so easy to slap and starts slapping him more.

In "Take the Plunge: Part 2", when Firey tells Match that she made a good choice picking him for their team, Coiny responds sarcastically with "Yeah, right, as if."

In "Barriers and Pitfalls", during the obstacle course, Coiny blows a raspberry at Firey, so Firey slaps him hard enough to send him flying. Later, Coiny is stepping on Firey's hand when he's holding on to his lift seat, so Firey slaps him again, this time out of the course.

In "Are You Smarter Than a Snowball?", Firey laughs when Coiny falls in the hole formed by Woody.

In "Sweet Tooth", Firey and Coiny are eyeing each other aggressively. Later, Firey teases Coiny for needing an oven, because Firey is his own oven. Shortly afterward, Firey laughs at the sight of Eraser and Pen spending Coiny.

In "Bridge Crossing", once again they stare angrily at each other when the contestants are standing next to the bridges.

In "Puzzling Mysteries", Coiny refers to Firey as a dumb jerk. When his entire team votes for Firey to join, Coiny votes against him, assuming his vote matters more. When Snowball picks Firey for their team, Coiny tells him that he hates Firey, and asks why he did that. Firey walks over, complaining that Coiny is now on his team.

In "Cycle of Life", Firey steps on Coiny's foot. When the wheel lands on Firey, Coiny says "Oh no." In opposition to Ice Cube's statement, Coiny says that Firey is a slow runner. Firey then calls Coiny dumb and does not thank him. When Firey spins the wheel, Rocky's vomit flies into his face. While laughing, Coiny says "Ah, that's just great" in response. Firey laughs when Coiny is not selected for the team, and then Coiny slaps Firey.

In "Insectophobe's Nightmare", Announcer cites Coiny and Firey as an example of people with arch-enemies. When Firey ends up on Coiny's team again, they argue and exchange another slap. In the team picture for Another Name, Firey and Coiny are glaring at each other. During the challenge, Firey and Coiny glare at each other even more, and are frightened when they realize their legs are tied together. They also slap each other some more. When Firey exclaims that they're ahead, Coiny tells him to be quiet, causing another argument. Coiny can be seen looking at Firey angrily when he's screaming on the tightrope.

In "Crybaby!", Coiny forgot that water is Firey's poison. They slap each other again. Later, Firey and Coiny are the ones on Another Name who hold the ski poles. During the handstand contest, Coiny laughs at Firey when he's barfed on by Rocky, then they exchange slaps and both fall over, losing.

In "Lofty", Coiny insults Firey, and then they slap a lot. When Golf Ball asks why they slap, they call each other jerks. At Cake at Stake, they exchange grrs when they find out that each other are safe. Then they start slapping, to the dismay of Tennis Ball. Before and after climbing the stairs, Firey makes a weird face and shakes his arm at Coiny. While climbing the stairs, they slap each other. Later, Coiny laughs when Firey screams due to his fear of heights. When Coiny slaps Firey, Blocky is waiting with a nail at his destination to pop his balloon. Tennis Ball points out to Firey, now on the ground, that it's all down to Coiny to win for them, Firey calls him the jerk.

In "A Leg Up in the Race", Firey calls Coiny worthless, and Coiny responds saying he meant priceless. Then Coiny says Firey "doesn't have a brain". They argue some more. When it's revealed that Firey is the only one safe, Coiny slaps him. Firey says that Coiny shouldn't be slapping the "most awesome person in the world".

In "Don't Lose Your Marbles", Firey slaps Tennis Ball because he needs to fill the void of not being able to slap Coiny.

In "Half a Loaf Is Better Than None", Firey laughs when Coiny drowns in bread.

In "The Reveal", Firey mentions that being in the final 8 without Coiny is wonderful.

In "Gardening Hero", Coiny complains to the viewers that someone as stupid as Firey is still in and he isn't.

In "Hurtful!", Firey meets Invisible Coiny (A recommended character variant of Coiny) in the TLC and says that it's good to see him where he belongs, then gets slapped. Firey is frustrated to see Leafy, Bubble, and Flower make dirt cakes like Coiny.

In "Return of the Hang Glider", Coiny votes for Leafy because he doesn't want to vote for Firey. When Firey wins, Coiny falls over, defeated.

In "Zeeky Boogy Doog", when Bomby denies Coiny's invitation to join WOAH Bunch, Coiny convinces him to switch by threatening to ignite him with Firey, Firey watches this angrily. Later, when Coiny is reminded of Firey's victory in season 1, he shouts "bleh!"

In "No More Snow!", Coiny yells at the Firey Speaker Box, calling him stupid, because Firey made him.

Coiny can be seen glaring at Firey in the IDFB intro.

In "Get to the Top in 500 Steps", Coiny asks what Firey is doing, Firey says he's doing nothing. Coiny appears to be frustrated by lets it go when he decides that Needle is doing the challenge. Firey is upset about this since he's a fast runner. Coiny recalls back to their conversation in "Cycle of Life", saying he thought Firey called himself slow. Firey corrects him by saying Coiny said that. Coiny decides it doesn't matter since Firey's scared of heights anyway.

In "The Four is Lava", Coiny face palms when Firey questions how people can be friends with Leafy when she stole Dream Island.

In "Take the Tower", Firey reveals that he used to own a glove with sharp spikes to slap Coiny with years back when they hated each other.

In "BFDI Is Back", Coiny and Firey exchange friendly banter while attempting to slingshot Coiny to the top of a tree. Notably, Firey accidentally slaps Coiny when he meant to give Coiny a high-five and apologizes. This is the first time that Firey and Coiny both show a friendship toward each other. This friendship continues in BFB.

In "Return of the Hang Glider", at the entrance to Dream Island, Coiny explains to Firey that he's grown closer to him than anyone he's ever known. Firey lets him in. When Firey and Coiny tell Flower to stop, Blocky says that it's the first time the two of them have ever agreed without arguing, he thinks. Firey and Coiny hug.

In "Getting Teardrop to Talk", Coiny and Firey are now friends. They sit together with Snowball and Taco and cheer when Taco manages to throw her seeds in a pot. When forming teams, Firey asks Loser if he wants to join his team and says he has all of his pals along, Coiny being one of them.

In "This Episode Is About Basketball", when Firey throws a ball, only for it to land right in front of him, Coiny picks it up and throws it himself.

In "Tribute to Our First Commenter", Coiny plays a french horn before Firey slaps it out of his hand.

In "BFB Contestants React to Wiki Comments", Firey says that he hates Coiny before saying he loves Coiny, before saying "You know what I mean." Coiny, off screen, says "No, we don't" and the two slap it out. 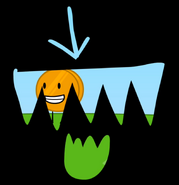